Getting Rid of Games Update 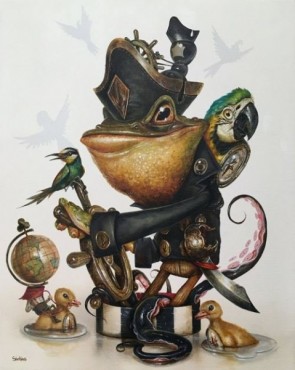 Back in October I blogged about Getting Rid of Games. I decided to give a couple of our under played games to Kindle Girl one of The Spawn’s friends. Kindle Girl is over my house about 4 days a week, and ever since she discovered my game cupboard, we’ve been playing board games when time allows. We taught her Settlers of Catan, which she loved, so I gave her our copy of Settlers Gallery Edition (the version with the fixed map). She tried to teach it to her parents, but the Mom told me they spent about 2 hours struggling with the rules before they gave up. This story was accompanied by much eye-rolling by Kindle Girl out of Mom's line of sight.

Around mid-December, Kindle Girl's younger brother came by with her Dad to pick her up. Turns out the brother was nearly as intrigued by our games as she had been. So I handed over our copy of Sword & Skull to him. Considering the trouble the parents had with Settlers, I didn’t have high hopes regarding their wading through the rules to Sword & Skull, but I figured at least it can be played two-player, unlike Settlers, and maybe he and his sister could work it out and play together. Worst case scenario, the kid got some cool pirate figs to play with.

With the holidays and everything, I didn’t see Kindle Girl again until this past Tuesday. She came bounding into my house. Well, not exactly bounding, but without her face in her Kindle, and she was actually looking around to make human contact with the residents of our home, which is the equivalent of bounding for her. She told me she had an awesome vacation break. She and her brother had spent the week with their 15 year old cousin. Together they had figured out both games and played the heck out of them. She told me that she preferred Settlers, but her brother and cousin went crazy over Sword & Skull, “jumping around and throwing dice and cheering and yelling like idiots.” She wasn’t so much into all that noise, and wanted to know if we had something in between Settlers and Sword & Skull.

“We got a cool, new Harry Potter game for Chanukah,” the Spawn told her.

“Get out!” Kindle Girl shouted as she literally jumped up onto her chair.

“No standing on the furniture,” I told her (I have to say stuff like that. It’s my job as a mom.)

So anyway, two of our shelf toads went to a good home, and I have a date for Friday afternoon to play Harry Potter: Hogwarts House Cup Challenge with the Spawn and Kindle Girl.