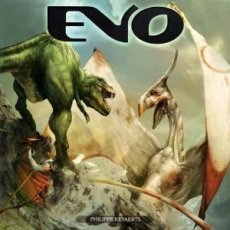 So yeah, Drake beat me to it but here’s a review of the new version of Evo. Long story short, dinosaurs. Sure, it’s not Schlacht der Dinosaurier, but what could be?

The really interesting thing to me about going back to Evo was seeing how Phillipe Keyaerts has pretty much maintained a very consistent style over the past decade and change. He’s big on games with very simple rules, limited mobility, and focused special powers. I’ve also decided that I really, really like his particular style. Small World is his best game, and I really need to play Olympos some more.

I believe the next Eurogames Descarte reprint is going to be Serenissima, which is a hugely underrated game that just needed a couple of rules revisions to be great.

I got a hold of a complete set of Ascension, the printed game, over the past week. Storm of Souls is _great_. It’s very much like an advanced Ascension, with more complex card effects and interactions. It plays by itself out of the box, but it feels like it’s missing some of the core cards of the base set. And I am worried about adding them into the Godslayer/Fallen mix because then you’re looking at a portal deck of _520_ cards, which is going to dilute some things like the new event cards. Regardless, it’s a great new set and I suspect in time we’ll see people tailoring the portal deck down. I’m really interested in trying the six player, three team variant…and seeing this new stuff in IOS.

I’m sure this will delight Black Barney- I’ve been playing Modern Warfare 3 quite a lot lately. I’m still no good, but I think I found my gun in the three-round burst Type 95. It seems like I’m getting higher kill numbers with it, but it may just be an overall skill increase.

I’ve also gone back to the Uncharted 3 multiplayer, which remains fun as all get out. The co-op is awesome and the competitive modes are really well done. I’m getting a lot more mileage out of this game than I expected.

Both games had map packs released last week. I’m not about to spend $50 to download two maps for MW3 and then wait a month to get some other small piece of content. Ridiculous. Likewise, I’m not in the $25 “Fortune Hunters Club” so I’d have to spend $10 for four old maps in UC3. Screw you, game companies. I’m having plenty of fun on the maps these games came with.

But also a couple of new ones…grabbed this new one called Dungeon Crawlers and it looks really good despite some TERRIBLE character graphics and an inexplicable obsession with referencing Ghostbusters. It’s an isometric, turn-based dungeoncrawl, but it’s really simple and easy to pick up and play. It’s almost like Heroquest or something like that rather than a Final Fantasy Tactics.

Also grabbed Bard’s Tale on sale for $2.99 but haven’t even started it up yet.

Kingdom Rush is on sale for 99 cents. I’m serious y’all, this game is great.

With all the Star Wars talk in our forums recently, I went back and rewatched the prequels. I hadn’t seen any of them in five or six years. When I was done, I had a deep regret for having done so. They’re worse than I remember, and watching them with some distance really showed me how much slack I cut them when I first saw them.

These are terrible movies. Not bad Star Wars movies, they’re bad movies. They’re like those kind of Z-grade kid flicks like Warriors of Virtue or Avatar: The Last Airbender. They just have George Lucas and some characters and settings from Star Wars to set them apart. They’re horribly made, horribly acted, horribly written, and horribly produced.

Oddly, the one that has held up the best is Phantom Menace- I think it’s because it was the last one shot on filmstock, so there’s still a trace of physicality. Real sets, real costumes, and some practical effects. Some of it almost feels like Star Wars, at least until you get to Jar-Jar, Midchlorians, Watto, and the fart jokes. I have to admit, the scene where R2 meets Threepio is cute. Too bad it’s in such a sorry film.

Moving into Attack of the Clones, the whole thing is so ridiculously overdone in terms of postproduction that I found it almost unwatchable. Everything feels so weightless and unreal, and virtually every frame is overlit or overprocessed. I can’t believe the battle scene at Geonosis …watch the Jedi, it’s like they hired the local Kendo club to come and do kata in front of a green screen and then added enemies. The movie is pure trash, top to bottom, with almost no redeeming quality. Interestingly, I previously would have said that it was probably the best of the lot. There is some cool design on Kamino with the cloners, but so what. There’s lots of SF movies with cool design.

Revenge of the Sith starts out pretty strong, actually. Except that everything, again, is way overprocessed and fake. The battle is decent, until R2D2 starts doing all of this silly shit. General Grevious is actually pretty cool, I like the idea of his character…but he’s so cartoonish that he’s not really menacing or evil at all. The rest of it is so, so bad. You’ve got to be a SERIOUS Star Wars apologist to be down with some of the stupid shit in this movie. Ben Kenobi riding that rainbow dragon alone makes this one a total turkey. The Order 66 sequence is so silly and maudlin I can’t believe it. You mean they killed those cute little Jedi moppets? HORROR! I forgot all about that unbelievably bad fight between Mace “I don’t really have anything to do with this movie” Windu and Palpatine…and the strangely penis-like makeup job on the latter.

So, revisiting the prequels moved me from being disappointed with them as a fan to hating them as films. They didn’t rape my childhood or anything like that. They’re just terrible, terribly made movies without a lick of heart, passion, or soul.

Still rockin’ the Nephilim, nothing new to report here. I’ve really got to stop listening to “Psychonaut”. I think River is really tired of it by now, we listen to it every time we’re in the car. That's OK, because I'm tired of the Incredibles!