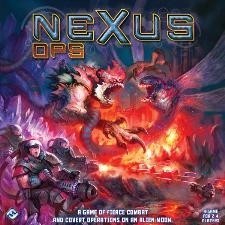 Fantasy Flight’s Nexus Ops is here, and damn is it ugly. They did well with incorporating optional new material and preserving the game with very minor tweaks and clarifications, but the graphic design is a complete fumble. It’s muddy, murky, and dark. But worse, it completely misses the point of the original’s 1980s arcade cabinet vibe (thanks again, Jeff). The glow figures may seem like a minor thing, but what’s the #1 thing people remember most about the game? Not the great, streamlined rules. Those day-glo and possibly toxic little critters. That’s such a huge differentiator for the game, and it’s so unique and charming that it’s really a damn shame that the new version has these serious-looking figures with so-what better detail.

The terrain tiles are an eyesore that would likely cause most accomplished graphic designers to barf into their Macbook keyboards. On the table, it looks like a slurry of dull colors with pastel (yes, pastel) miniatures dotted across it.

In short- stick with the old one unless you have no taste and actually like the new artwork and atmosphere. Download the new content and use your gloriously day-glo 2005 set. I’m totally behind what FFG did in terms of revisions, but I think they completely dropped the ball on the presentation. Review at Gameshark.

In other FFG news, Wiz-War showed up but I’ve just had time to open it up and see the space boards. I didn’t know that this was a game about wizards floating in space mazes. It must be set in the TI3 universe.

Got to play 1812: Invasion of Canada. Holy crap, this game ROCKS. Seriously y'all, do not pass this one up because of the wargame packaging or cube confusion. It really does need five players to meet its potential, but it’s got some absolutely brilliant stuff in it. It also feels like something completely fresh and innovative. The neat thing is how the co-op/team play element is driven by a mutual lack of resources and mobility…and the ability for players to move entire armies for their side. But everybody gets in on the dice rolling and makes in-battle decisions for their armies. There’s some smart stuff dividing fleeing units from those making strategic withdrawls (which can get more troops into an adjacent battle). Each side has a unique card deck and dice that give them specific flavor but without special powers, exceptions, or text. It’s extremely simple, but there’s TONS of game and it’s totally a bloody knuckles DoaM beat ‘em up despite the historical theme and wooden cubes. It’s also really quick-playing, with virtually no administrative overhead other than a little setup time. I’m loving it, and I think it'll be a big hit in these parts once it makes the rounds.

Not much to report here other than that Soul Calibur V is OK and reviewed but pretty paltry for the single player and that Resident Evil: Revelations is a classic RE title that hopefully signals a return to form for the upcoming RE6. Definitely the best game I’ve played on the 3DS yet.

I'm pretty proud of my tagline for the SCV review...unexpected reference and all that.

Oh yeah, there's also a review of a little 3DS game called Nano Assault. It's OK. The reference there is pretty good too, if I do say so myself.

Also a couple of new items though- I picked up the Call of Cthulhu thing, but it’s not finished. The touch response is horrible on it. Save your $5. Also played a little Flipship, which is sort of like a cross between Tilt to Live and Ikaruga, it’s not bad for a dollar. Shogun is a free bullet hell-style shooter that’s worth checking out if you’re into that kind of thing- not as good as the Cave stuff, but they tried pretty hard.

But really, what I’ve secretly been playing the most is Triple Town. I caved in and bought the $3.99 unlimited turn thing. This game is the devil. It’s terribly addictive. It’s a match three, but it’s one of the more cerebral and brain-burning ones I’ve ever played despite the cutesy Animal Crossing graphics. You match up three or more like terrain features, and they become a single upgraded one, clearing out real estate and increasing score. It requires some pretty intense planning- and luck- to get the higher scores.

There’s also bears. You’ve got to control the bear population. They hang out and block building sites. If you trap three together, they die and you build a church on top of them. But then these ninja bears show up and jump all over the place, always landing right where you need to build.

Unfortunately, there’s a big problem with the game, I think. After each game, you get some coins that you can use in a later game to buy features rather than wait for the random draw. They’re limited, but you can also buy coins (as in, with a credit card) to artificially boost your score. It’s the wrong model. It should be that you earn coins in the game through combos or bonuses and those are spent in the game to get extra stuff. But it’s the whole freemium model at work, which sucks.

Regardless, one of the best puzzle games on IOS. I just topped 100,000 on a game…somehow, Bryan Bornemuller at FFG has a score of 540,000+. If he didn’t buy any coins with real money, that’s phenomenal.

After my disastrous re-watching of the Star Wars prequels, I thought I’d go back and watch Avatar again since I’d just seen it once in the theater. Now, I was one of the people here defending the movie. I thought it was good, pop sci-fi that would have been regarded as a classic if it had been released before internet cynicism ruined everything. The melodrama is thick and the romantic subplot is sappier than the home tree, but I still liked the film.

Rather unlike the SW prequels, it also feels like a film that was labored over and cared about by the people that made it. It’s really pretty detailed and well-framed. The visual design is freaking awesome, particularly the military stuff. It’s classic Jim Cameron. The animals are great, the plants are great…it’s just the Navi that look silly, but I sort of _like_ that they’re giant, blue people. It’s very pulpy in almost a Burroughsian way. The whole film is really quite old fashioned despite the technology- the characters, writing, and scenarios are straight out of a 1980s blockbuster action movie.

One thing I was thinking about watching them right after Lucas’ three-part shitshow was how all these people rolled their eyes about “unobtanium”…how in the world is that any less corny, on the nose, or ridiculous than “The Force”? Or bad guys named General Grevious, Darth Maul, and Darth Tyranus?

Anyway, I like Avatar. Much more than the prequels.

Hey, is there anybody here in the audience that’s a fan of Chris and Cosey? Anyone? Hello? Is this thing on?

OK, well, anyway, I’ve been listening to this new-ish London trio called Factory Floor and they’ve got a very Chris and Cosey-ish kind of sound. They’ve even got a Chris Carter remix (not to mention another from Joy Division/New Order’s Stephen Morris) to back up the claim.

It’s incredibly sparse, relentlessly repetitive electro. Crisply produced and best listened to at the maximum volume your speakers (or ears) can withstand. It’s not that it’s harsh or particularly aggressive, it’s that it’s the kind of music that’s best when you can _feel_ it. It’s got a very 1981, Factory Records kind of sound with a touch of Throbbing Gristle’s more accessible moments. Echoplexed female vocals, live drums on occasion. I’m totally loving it, very minimal and definitely not for people who don’t get the point of listening to a song with essentially two notes for ten minutes.

Finally, one more “peace, love, and soul” for you.