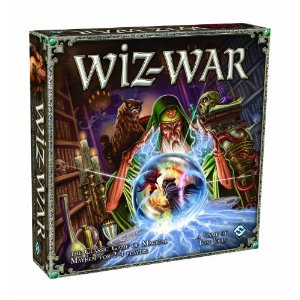 They took out Buddy. Barnestorming #41 still has it.

For all of my supposed hatred of FFG, I sure do commend them a lot when they do right by consumers, game players, and reissues. And with Wiz-War, they’ve done all three. It’s Fantasy Flight Games at their best when it comes to reprinting classic games, and Kevin Wilson has pulled off a repeat performance of the great work he did with Cosmic Encounter. Purists may turn their noses up at professionally printed cards with actual artwork on them, but for my money this is the definitive, modern edition of the game. The look is right, the content is right, and they were smart- and respectful- enough to not alter the game as to make the original rules unplayable. They’ve also included all of the original rules as variants to the new edition, and these are clearly marked.

I’m thrilled. More than that, I actually appreciate the game more than I did when I was playing it regularly in the early 1990s. What’s really funny is how unlike other games it still is. There’s plenty of dudes in a hall games, plenty of dungeon crawls, plenty of post-Magic card games…but nothing is quite like the wizardly deathmatches this game creates. I really hope they issue expansions for it like they have with Cosmic, I’ll buy anything in the line without hesitation.

Review contains a Wizard of Wor reference. I’m kind of proud of that. Bill Abner hasn't posted it yet, but look for it soon and somebody post a link here if I miss it.

I also got another package from AEG yesterday- those sweethearts sent me the full set of Avatar cards, a new mechanic in Thunderstone Advance. I’m not quite sure why they’ve made it sort of a promo/exclusive thing, but I’m looking forward to trying them out. Really digging the new set, just trying to figure out how to combine everything. I have a A LOT of Thunderstone at this point.

Of course the big news is the Vita. I just wrote it up at No High Scores. Short version- it’s the Cadillac of handheld gaming. There are reasons why you would want this over an iDevice. It really is almost PS3 quality. Rayman Origins actually looks even better on the 5 inch OLED screen. Blazblue too. FIFA is almost exactly the same as FIFA 11 (it’s missing the new defense mechanics of 12). Great stuff.

Playing Syndicate for a review. I may love it. The co-op is awesome, it really does kind of feel like the old Bullfrog turn-based game, except that you’re the Cyberpunk badass with a leather trenchcoat at a ground level. The Cyberpunk stuff, like Deus Ex, is very 1990s and I love that. All megacorps, neural chips, hacking, and whatnot. The single player has a weak story and it’s a modern, corridor shooter but there’s some good action including a killer set piece on the roof of a train barreling through a city on a skyrail. A gunship is blasting at you and there’s guys on jetbikes attacking you. It could have been another lame turret sequence, but you’ve got full control. Really digging it.

Reviews for Gotham City Imposters and Warp are up. I’ve also got a review on Bill’s desk for Alan Wake’s American Nightmare, which I think is nearly outstanding. It’s not really a sequel, but Remedy corrected a lot of the less-than-great stuff from the first game and made it more of a compact, action-oriented survival horror thing with a compelling story gimmick.

So burned out on Ascension right now. It gets to be a drag when you have 30 games all waiting for your turn. I overdid it. Still love it, I just need to get my pending games cleared out and under control. Storm of Souls will likely rejuvenate the game for me.

Did you know that there’s an Omen: Reign of War app coming? I’ve said too much.

Fairway Solitaire. Good god. Do not play this game. I DO NOT play Solitaire variants. EVER. I simply do not. I won’t. The fact that I’m actually top ranked on some of the leaderboard categories for this game proves NOTHING. It must be some imposter masquerading as Crackedlcd75. The game is free, so if you just simply must see how it is, you can. You can buy the whole thing for a buck on the phone, which I absolutely do not recommend and would never do myself. Just because I have an App store invoice that shows that I bought doesn’t mean anything. I do not play Solitaire. I don’t even like golf.

A couple of Roger Corman classics have turned up on Netflix, and they’re all required AT viewing- particularly Death Race2000 and Battle Beyond the Stars. Death Race 2000 is simply put, an American masterpiece. I’ve often dubbed it the best exploitation picture ever made, simply because unlike so many other “grindhouse” films it totally delivers the goods start to finish. There is so much greatness in this film. Frankenstein and his groupies with the Helvetica F shirts. Machine Gun Joe Perturbo. The nursing home scene. “A GREAT kill, a CLEAN kill”. And it’s like 70 minutes long, so you can watch it twice in the time it takes to watch heartless shit like any of the Transformers films.

Battle Beyond the Stars is a childhood favorite of mine, and I have it on good authority that it partially inspired Branham’s upcoming Battle Beyond Space. It’s obviously a cheapjack Star Wars imitation right down to the Kurosawa references, but it’s really fun and just slightly aware that it’s total trash. I mean, the heroes’ ship has a smart-talking lady AI…and the ship has breasts.

There’s some cool stuff in it, actually, like aliens that communicate by changing the temperature around them. And George Peppard as a space cowboy. A literal space cowboy.

It’s interesting to note that this was Jim Cameron’s first major credit, he did the models which are actually quite good for a B-grade programmer. It looks better than the Star Wars prequels. James Horner is on the music, and it’s written by John Sayles. Of course, all of that high class talent is kind of undone when you bring John Saxon into the cast, but there it is.

You gotta watch it if you haven’t already it. Good times guaranteed. 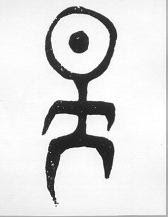 Definitely on a Mute/early industrial kick lately. This week I’ve been revisiting the Einstuerzende Neubauten catalog and just completely flipping out over this stuff all over again. Such an incredible band with such a incredible vision for combining rhythm, sound, pain, debris, improvisation, and composition. It’s really striking how _musical_ they made throwing a microphone into a shopping cart full of broken glass or attacking a spring with a power drill. I’m totally lost in “Kollaps” as well as the essential “Strategies Against Architecture” collections. I’m really enjoying “2x4” as well, which I think is one of the best live albums I’ve ever heard if only because it captures what they do as it happens.

I got to see Neubauten in 1993, which was the last time they came to Atlanta. It was my senior year in high school, and my group of friends went down to the Masquerade on a school night to see them. Miranda Sex Garden, a now-forgotten gothy shoegazer band that was pretty good, opened. They went on at 10. Neubauten, due to a travel delay, went on at 2am. My friends wanted to leave, so they left me. I knew that if I left, I’d probably never get to see them again. It was worth the wait, because they were fucking amazing and it stands as one of the greatest shows I’ve ever seen. The intensity was unbelievable, but it was paired with some of the quieter, more melodic stuff they were doing on “Tabula Rasa”. FM Einheit was clamboring on this scaffold/drum kit thing beating on it with implements he was carrying in a tool belt. Blixa played guitar at stun volume and screamed in German. They did “Tanz Debil”, “Abfackeln”, “Armenia” and of course “Yu Gung”. I was totally blown away.

I got home at 6am, having to take a taxi home. My parents flipped out, and I went to school without having gone to bed. Never regretted it.