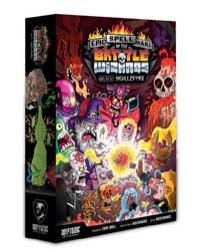 Epic Spell Wars of the Battle Wizards: Duel at Mount Skullzfyre. That should be enough to get you interested in playing this game or at least reading this review.

It’s a fun game, and it’s actually a smarter design than I expected. The multi-part card thing is very similar to BattleCon, but you’ve got three pieces instead of two. The Dead Wizard mechanic is freaking great, even when you’re eliminated you’re drawing cards and getting ready to get revenge in the next round. I love any game where a player is able to say “fucking kill me now or Barnes is going to slaughter us all in the next round”.

The art style is freaking killer. It looks like Larry Elmore dropped a bunch of acid, put down his airbrush, and looked at some 1960s underground comix for inspiration. While watching Superjail.

Funny enough, Rob Heinsoo is one of the credited designers so there’s actually some genuine D&D cred.

Anyway, the game has a little cardboard standup of Mount Skullzfyre that does nothing but look awesome on the table. Game component of the year.

The winner of last week's "Guess Bill Abner's Line" was no one. He put something in there about paying attention to other people's quests. I didn't write that. I never would write that.

Reviewing Ridge Racer: Unbounded this week at Gameshark. It’s not bad, if you like racers like Split/Second and Burnout. It’s not very original, but it’s at least got some grit to it unlike the past 49 Ridge Racer games.

Funny enough, playing it made me want to get back to Driver: San Francisco so I rebought a $11 copy of it at Target. I think that game was really underrated last year. It’s a totally unique concept with the weird Life on Mars/possession angle. And it’s refreshing to hear a bunch of obscure go-go and funk on a soundtrack instead of god damned dubstep. More on that in a minute.

I just wrote up Kid Icarus: Uprising for No High Scores. I freaking LOVE it. It’s like a cross between a Treasure shooter and a simple dungeon crawl with loot and weapon crafting. The best thing about it is that there’s more dialogue than in Nintendo’s past ten years of games. Pit, Lady Palutena, and even the bosses literally jabber NON STOP through the whole game. But it’s not irritating- it’s funny! She’ll describe the bosses- “In the eighties, Thanatos appeared as one of Medusa’s henchmen…” and it’ll show the original Kid Icarus graphics on the bottom screen. Game is hard as balls too if you crank it up past about 6.0 on its sliding scale.

Biding time until the Witcher 2 comes out. Very excited to finally play that.

Battle Academy reviewed at NHS- the long and short? Definitely worth $20, there’s virtually unlimited depth and play value. I’d love to try the async multiplayer if any of you folks got the game.

I bought Imperium Galactica II, but I have no idea what I’m doing and I can’t be arsed to watch a video tutorial right now. Looks great though.

Bug Princess 2 (Mushihimesama Futari) came out last night, I didn’t buy it yet. But I will.

We have become a Toy Story household. River is officially obsessed with them. And I have to admit, I’ve really become enamored of them too. I never really liked them, but having seen them all 175 times over the past two weeks I think I’ve got some kind of Stockholm Syndrome.

Nah, they really are pretty great- the writing is extremely smart (despite Joss Whedon on the first one), the characters are great, and it turns out that they’re pretty timeless unlike too many animated films.

But yeah, River flips out when we’re in the store and he sees “Badoo” and “Wodai”, which is what he calls them. I got him a 12” talking Badoo for Easter. Perhaps it will tell him the story of Jesus’ death and resurrection.

I’ve tried about four times in the past week to watch Shaolin Soccer since I’ve never seen it. I fall asleep every time. I really should start it before 4am.

OK, back to the dubstep thing. I feel like an old man, but I really had no idea what dubstep was and why the kids are talking about it these days. I knew Skrillex is a Big Deal, they were on the Ridge Racer Unbounded soundtrack, and the record nominated for a Grammy and all that. So I thought I’d listen to the Skrillex records on Spotify so I could be with it.

What a load of shit. It’s such a soulless, plastic, and completely baseless kind of music that seems like it’s written by and for people who really don’t give a flying shit about music. It’s so empty, hollow, and without any sense of purpose. All the “drops”, the autotune vox…it’s alarmingly commercial and bland, unlike the best electronic and techno music.

Beside that, who the hell will listen to this crap two, three years from now? It already sounds dated.