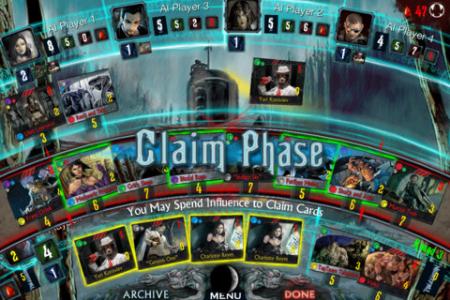 I actually don’t have anything to review this week. The tide has waned, at last. I’m not running on empty- I got a package from the fine folks at Stronghold containing their very awesome-looking Revolver and the very Citadels-looking Lost Temple. Both should be reviewed shortly- maybe even next week since they’re smaller titles and I can probably get in a bunch of plays between Hellfire Club and some home sessions. Destined Hero is coming up too.

So it’s an editorial this week inspired by our very own Dragonstout. He asked me in the forums what it was about physical Ascension that prompted me to sell it…although I like and have championed the IOS game extensively. So it’s about how deckbuilders are really at their best when the transcend physical media and exist digitally. I’m sorry, but the physicality of touching cards or whatever and even sitting at a table to play it is trumped by actually GETTING to play the game as much as I want with real people and for a fraction of the cost. And that frees time up on game night to play more Cosmic Encounter or whatever.

Witcher 2. If you like role-playing games in any capacity, this is the game you simply have to play. It’s amazing, and afteronly about six hours into it I would absolutely call it one of the best RPGs I’ve ever played- up there with Baldur’s Gate, KOTOR, Wasteland, and so forth. It completely wipes the floor with everything Bethesda has _ever_ done and it humbles BioWare’s best. It’s a smart, sophisticated game that’s very adult and not immature or facile at all.

The fantasy is definitely low, more in line with Glen Cook, Joe Abercrombie, or (gritting teeth) George Martin than Tolkien. It’s also very European, and everything is grounded and realistic- even the damn elves. The attention to detail is sometimes staggering- there’s a siege that opens the game where you can sit on this overlook and just watch these trebuchets being loaded and firing.

The combat is closer to Dark Souls than Skyrim (thank god). Hacking and slashing doesn’t work. Every fight, even against peon guards, requires you to prepare and think on your toes.

The writing is spectacular, even when the voice acting isn’t. There are little touches that are subtle but just add to the overall density of the game- there’s a beat in the intro cinematic where a king being attacked by an assassin on a ship actually stops to finish his drink as his bodyguards rise to his defense. The characters are realistic, not necessarily good guys, and intrigue abounds- not just Z-grade pulp fighting and lame nth-generation Tolkien/D&D junk.

It’s cool that there’s a trade-off going on this year, with 360 getting Witcher 2 and PCs getting Dark Souls- the two best RPGs of this gaming generation.

I got Gratuitous Space Battles, but between the game constantly crashing and the fact that I really don’t think I like it, I don’t see it sticking around on the desktop for long. It seems like a cool idea, but a bunch of micromanaging ship designs and then throwing them at an AI fleet to see what happens is pretty dull.

I re-watched the David Lynch Dune for about the zillionth time. I don’t care what anyone says, I still think it’s a great science fiction picture even if it completely changes certain elements of the book like the Wierding and it almost requires you to have read the book to understand anything that’s going on.

The design is brilliant; it is for me the definitive look of Dune- some of that may have to do with seeing it in the theater when I was nine. There are TONS of great, visionary design pieces in it- I love the colossal picture frame on the Guild Transport you see during the crossing to Arrakis. The Sardaukar are definitely better than the Czech chefs from the SciFi channel version. Sting looks great as Feyd. I love the music (Toto?!). I love some of the bizzare, stilted dialogue. The internal monologues. I even love the god damned on-screen title fonts.

It strikes me as funny that it’s almost not considered a “canonical” David Lynch film because it is so totally David Lynch- it’s just a genre he doesn’t typically approach. There are moments in it that are as David Lynch as anything in Blue Velvet, Lost Highway, or Eraserhead. The first scene on Giedi Prime is TOTALLY David Lynch- all overblown melodrama, awkward looks, and grotesquerie. Some of the characters feel completely like David Lynch figures. Even the Guild Navigator.

Where it kind of falls apart is when the scope gets bigger- the heroic, epic thing isn’t something he’s really invested in- or capable of. Which is one of the reasons I think the movie is considered a failure as a whole. It was groomed to be a Star Wars-style blockbuster complete with toys and merchandising…but it’s really a very strange, off-kilter kind of science fiction movie.

Love his cameo in it…you can’t miss his big, Midwest accent even in the middle of a sandstorm. 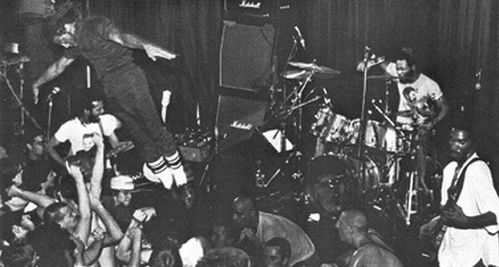 Mostly I’ve been listening to Bad Brains though, they’re the band that I always seem to come back to when looking for the best of the genre. You just can’t beat the ROIR cassette (well, CD…er…stream). So many great- and very distinct- hardcore cuts on that record. No other band has EVER matched their sheer power, ferocity, and skill.

I’ve been listening to some of their NYC/DC hardcore contemporaries as well- especially the great New York Thrash compilation from 1982 with a couple of pre-rap Beastie Boys tracks on it, Kraut, Even Worse, Jesse Malin’s first band Heart Attack, Undead, Adrenaline O.D. and so forth. Awesome stuff and an essential document.

I’ve even been listening to some Cro-Mags, who I’ve never really liked…but I’m digging “Before the Quarrel”, a collection of demos of stuff that went on their debut, “Age of Quarrel”. Super raw and aggressive. Totally not into the Hare Krishna thing at all though.

It’s kind of an issue I have with Bad Brains too- the Rasta thing has always been kind of off-putting to me, particularly when it gets into homophobia on one of their later records and the religious element isn’t what hardcore is all about for me. That said, it obviously inspired HR and crew and put some real passion and fire in what they do, so there’s that going on as well. I’m all about the positive messages and goodwill- but not the fealty to belief systems.

I also just started to listen to this new-ish hip hop outfit out of Sacramento called Death Grips. Holy shit, it’s brutal. Problem is, most noisy/experimental hip hop tends to be a flash in the pan without any staying power. Dalek, Techno Animal and so forth were great for a few listens, but I never go back to them.

Discuss this article
Log in to comment
Posts in discussion: Barnestorming #9210- The Digital Transcendence of Deckbuilding, Witcher 2, Bad Brains