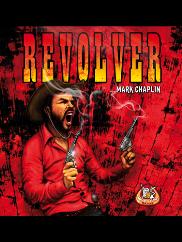 I’ve been playing Stronghold’s new issue of Mark Chaplin’s Aliens card game, Revolver. Of course, it’s not Aliens anymore, but as a consolation prize it’s a bona fide Western. And a pretty damn good one too. No settling, no cattle-counting…bounty killers, bandits, exploding trains. I like it quite a bit, but I am worried that it’s not going to have legs over time, and the really successful two player games tend to not fall into predictability. It’s a “time will tell” issue, but for now it’s a good one, and if you’re looking for something to play for two in 20-30 minutes, you can’t go wrong. Yep, Gameshark.

I also have Lost Temple, which I’m playing and will review next week. Short version- Citadels with a race instead of building. I'm really happy to see Stronghold gaining steam- this is a good company with a diverse stable of interesting games and some amazing reprints. Can't wait to see Crude.

Asked Minion Games for a copy of Manhattan Project, but they’re completely out of it. I snoozed, I losed.

I did snag a copy of Banditos, a sort of under-the-radar title from a tiny publisher about robbing Mexican banks in 1982.

even out of the first chapter, but I finally beat the Kayran this morning. Epic battle…it was quite difficult, but eventually I worked out how to beat it.

Had a great side quest last night. Drank a few rounds with some soldiers, woke up naked and with a new tattoo. Had to ask around to find out what happened. The madame at the brothel explained most of what happened…which was bizarre, hilarious, and decidedly not very sexy at all.

The game is actually really funny, very vibrant and alive despite the grimness and darkness.

It’s without a doubt one of the best RPGs I’ve ever played, if not the best. What’s more, the game represents a kind of value that other publishers have abandoned. You get a two-disc, content- packed game filled with extra material not in the original. A quality port. A soundtrack disc. A map. A full manual. A quest guide. No DLC, no preorder bonuses, no online passes. It’s worth $60.

I asked for a review code for Marvel vs. Capcom 2, but I was told that they had “no more product for press”. A damn $3 value code…

I haven’t really touched anything on it, not even Nightfall lately. River’s been playing Fruit Ninja and Jetpack Joyride on the iPad, and that’s all the gaming it’s really seen this week.

Witcher 2 is taking up most of my viewing time, but I did start re-watching the Sci-Fi channel’s Dune miniseries. If it weren’t for the embarrassingly horrendous Babylon 5-quality acting, production design, and direction it might have been the definitive film version of the novel. The long-form adaptation is good and works in a miniseries context, and it covers the lion’s share of the material and themes.

But it looks fucking awful. That’s harsh, uneven is probably a better word. Some of the costuming looks like it came from Liberace’s closet and some of it is so cheaply and poorly executed it looks like really, really bad cosplay of random, unknown characters. I mean, seriously…purple lame in a science fiction picture that ISN’T Flash Gordon? The Sardaukar outfits apparently are some kind of chef garb with big floppy hats.

Then there’s this weirdness were some of the effects are fairly high quality and look good, but then you have- literally- a crude painting outside of a set wall window. Not like a high quality matte painting. Something really crappy that’s supposed to show what’s outside. Amateurish and ugly.

I do not get the Harkonnen thing with the bizarre camp samurai style either. It’s actually a little more upfront about their sexual decadence than the Lynch film, but the Giedi Prime sets look like something left over from Buck Rogers.

Lady and Gentlemen, I give you the sound of 2012, the undisputed (at this point) Album of the Year.

It’s Death Grips “The Money Store”, just released on Epic Records (WTF?!) this week. Signed by L.A. Reid himself who apparently insisted that nobody mess with what they do, regardless of how uncommercial and uncompromising it is. And it’s one of the most extreme, transgressive, and utterly thrilling releases on a major corporate record label in…I dunno, decades?

More or less, it’s a hip hop album and there is some mighty, mighty fine rappin’ courtesy of MC Ride, a very scary looking man with the sigil from the Necronomicon tattooed on his chest. Choice line “soon your crew will be making sandwiches named after me/Vietnamese style, fool”. His style is jagged and fluid and it sounds like 40 years of MCing brought to full flower. West Coast, East Coast, Dirty South, New York City…none of it matters at the end of the world.

But it’s also noisy and industrial, highly manipulated with found sound and with an almost musique concrete approach. It’s also rock. And punk, post-punk, and death disco. It’s more visceral than intellectual, abrasive and experimental but there’s a couple of cuts built on some pretty violent party-rocking beats- mostly performed with real drums.

It’s an exhausting album- the energy and aggression will wear you out. It’s the sound of collapse and construction simultaneously, and it’s terrifyingly modern while feeling like something you might hear on a broke-down radio in a third world country. It’s the sound of 2012 apocalypse, built from YouTube samples, abusively overprocessed synths, and almost subliminal hooks.

If you only listen to two tracks, make it “I’ve Seen Footage” and “Hacker”. I had a physical reaction to both songs. Goosebumps. The former almost sounds like Salt n’ Pepa’s “Push It” overlayed with a queasy, half-remembered Gary Numan keyboard riff, sirens, scraping bass licks, and a ridiculous dance beat. The latter is an utterly breathtaking conclusion to the record, climaxing with the hook of the year- “I’m in your area”. You know those parts in a song where you’re just like “yeah, this is that really bad ass part”? This whole song is made up of those really bad ass parts.

I honestly don’t remember the last time I heard a hip hop record that I loved like this. It feels like a bomb going off, like “It Takes a Nation of Millions” or “Straight Outta Compton”. But it’s so far removed from cartoonish gangsta rap or politics. And it wipes the floor with all of the empty over-commercialized junk that’s poisoned hip hop and rap music over the past decade.

They have another record, “Exmilitary” that I’ve been listening to and it’s very good as well (one song is built off a sample of Black Flag’s “Rise Above”), but "The Money Store" is definitely a quantum leap forward. It’s the classic sound of a band Getting Their Shit Together, and it’s absolutely exciting to hear.

And they’ve got another record coming out later this year.