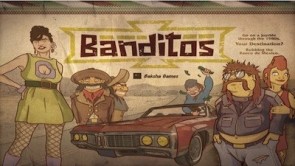 The only board game featuring "Juke Box Hero".

And this week, it’s a review of Banditos. I can not in good faith tell you that Banditos is a good game in terms of design, balance, or technical merit. Because it kind of isn’t. But it is one of those rare games that has a scrappy sense of heart and charm- along with a unique theme- that just might win you over. It seems like it’s one of those that’s a couple of house rules away from greatness. I’m sure if Richard Launius ever got a hold of it he’d rewrite the entire rulebook.

It’s an inexpensive, nasty little game where you can rob a Mexican bank with a sten gun and drive off in a Datsun 280ZX while listening to Joan Jett. That counts for a lot.

Red Raven Games was kind enough to send me Empires of the Void, and it looks pretty darn good. The big question is if we need another epic-scale 4x game so soon after Eclipse. Looking forward to seeing what this one does differently. But my god, there's a lot of cardboard counters in it.

I’ve also got the new Omen in its swank ass new edition and Hemloch from Small Box Games on the docket. Hemloch has more great art, something SBG is going to get known for if they’re not careful. Omen is great, we already know that, but I’m looking forward to the new content.

Oh, Spiel des Jahres nominees were announced. Um...that's all I got.

Just got a review copy of Dragon’s Dogma, so we’ll see how that turns out.

I’ve been playing Ghost Recon: Future Soldier and I like it quite a lot. There’s a great sense of cinematic technique that’s more compelling than the usual Michael Bay stuff you see in military shooters. There’s some really cool stuff with AR HUDs, and the shooting is mighty fine indeed. The game has surprised me, I thought it was going to be an also-ran. I’ve got an impressions article about it going up tomorrow at No High Scores.

I’ve also been playing Marvel Ultimate Alliance 2 since I’m in this comic book thing right now. Utterly stupid game. But I love it. I’ve really learned to respect Luke Cage in a way that his comics appearance never fostered. The man is a total bad ass that can punch robots like nobody’s business. So much fun to be had in this silly game, from methodically throwing SHIELD guys off a catwalk to throwing Wolverine into a crowd with The Thing. The only real disappointment is that Iron Fist and Daredevil completely suck. And there’s a fun trivia game you can play for XP too. Wish I had played this much sooner, and it tells pretty much the whole Civil War story so I don’t have to bother with reading it.

I read at least one issue of almost everything you guys recommended last week. The big winners are definitely Scalped and Irredeemable. Scalped, I can’t believe hasn’t been made into a picture yet. Irredeemable is a very compelling twist on the Superman-class hero, modern and chilling. I would actually have really liked to have seen this story applied to Superman or a similar character rather than an “off brand” hero, the impact would have been amazing. I’m not a big fan of Mark Waid in general, but this is his finest writing outside of Kingdom Come, IMO.

The Scott Snyder Batman story is taking off…Court of the Owls, wow. Cool stuff. I just got the first of Grant Morrison’s Batman Incorporated, I _love_ the idea there.

Saga completely sucked. I hated virtually every single thing about it.

Astonishing X-Men, I still don’t know. It’s definitely good, but I don’t know if I can handle the Whedon crap. The character writing is nice and I like how the story is shaping up, so I may stick it out for the first storyline at least.

I finally caught up with Drive, last year’s cult favorite from Bronson/Valhalla Rising director Nicholas Windig Refn. I liked it and I thought it was a pretty effective character-driven neo-noir, but there were a couple of things that bug me about it. One is that Carey Mulligan was terribly miscast, regardless of her cuteness. Another is that Gosling might have been channeling Travis Bickle too much. Another is that the violence was actually too over-the-top and had less impact than it should have because it was ridiculous. And how do you under-use Bryan Cranston AND Christina Hendricks?

And the big car chase was an utter disappointment. It was too closely cut and shot, so it didn’t have the scope and “wow” of something like the one in Bullitt. It really needed a showstopper like that

But there was plenty of good. The soundtrack is KILLER. Perlman is at the top of his game, as is Albert “out of nowhere” Brooks. The story is well-told. And man, the real-time opening scene shot almost entirely in the interior of a getaway car is amazing. The overall tone and atmosphere is perfect too. It definitely has a similar feel to Walter Hill’s Driver.

Watch this director. He’s going to do great things.

Chromatics, Glass Candy, Desire, College, Kavinsky. What can I say, Drive influenced my listening this week.