It's all in the Group 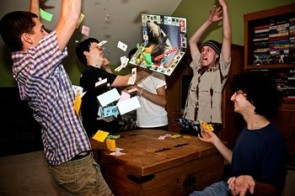 After reading through the mighty HiveGod's GOTW posts on that other boardgame site, (something all you guys should check out) I was struck by how much his gaming experiences were similar to my own. The memories that he and his fellow game buddies were reminiscing about sounded a lot like some of my own. It dawned on me that he had one heck of a game group,and then I remembered that I too am lucky enough to have just such a group.

This blog will be a tribute to the Guys (and a Gal) who make gaming fun for me.

I think something that we gamers overlook often is just how important the other guys in a game can be. Certainly a bad player game ruin a game, we are all very familiar with the Fun Murderer, but also a good opponent can really make a good game great. Taking an ordinary game and making it into a special event. Having a good steady game group is the difference between being a gamer and a guy who has a game collection. If the game group is solid enough then other factors begin to creep in, the meta game becomes the game... Game night itself becomes a year long session in and of itself, and let me tell you that can be even better than some of the games we play.

On to the Cast of Characters.

Our Founding member and a guy who probably does more work than anyone in making the Scene is my little Bro "Bobby Tweaks". Rob gives up his house every Wed. for us to have a home. He has the facilities setup up for maximum comfort. There are shelves and shelves of games at arms reach, a refrigerator dedicated to beer, snack and even a coffee station. Those thing alone make sure that some group of guys will meet every wed, and it has been that way for years on end now. Rob and I, as brothers have 33 years of gaming history that is layered into every game we play at some level. We never trust each other for more than half a turn and regular gamers know this and use to their advantage, like in the infamous Cosmic Encounter game where when Through a masterful set of card plays by yours truley, I put Rob and I in a position to share the win over the other players. Rob decided for both of us to share the loss instead......Doh!

Member number 2 and our Current Reigning Spiel-Meister (There is a mug and he gets it filled upon request just for holding the title.) is the Joie. Andy has the largest game collection of anyone I know. There has to be close to 1000 games in that thing, most are older AH titles, but he did the euro thing for a while. Defiantly the most experienced gamer, he never stopped playing in the 80's and 90's and is the guy who got Bobby Tweaks and Myself back into gaming. Andy also is a big beer guy and so as a result we have all become to some degree beer snobs. As Ken B can attest to that beer box in the spiel hall is filled with very nice beer (and plenty of Natty Boh, since this is Baltimore after all). Andy is also usually the default target, since he wins a lot, and so can sometime complain. He has earned the nickname "The JoiWaaaaaaaaaaaah!" at times. I have referred to his play style as whine whine whine whine .... oh I win... Truth is he is a good gamer who plays well regardless of the genre of game.

Next up is Phil "The Steak" White. Phil is our resident short euro game lover. If it take 45 min and is won by understanding the scoring system better than anyone else then it is Phil's game. That being said Phil is actually a a nasty Ameritrash gamer if you get him in a game, they are not his 1st choice but he can be ruthless when he needs to be, and he certainly enjoys Nuking you base as much as the rest of us and coined the phrase "Never Listen to a Buccheri." He is also a big Slap Shot fan, so I usually goto Phil when I want to get that one on the table. Phil also is always close to contending to the Spiel Cup, mostly due to his averaging a ton more games than everyone else.

Core member #4 is Danbuster. Dan was a green gamer a few years ago, but has come along nicely. Always enthusiastic about any game Dan is a great addition. Willing to fill out anything and as time goes on becoming a consistent winning threat. Dan started with mostly euro's but of late has become a mini grognard playing titles like Age of Napoleon, All t he Columbia Block Games, and Manouevre. (however thats spelled) Either way Dan almost never misses a week and will play most anything.

Still a little new to the scene KingPut has become a regular. Sure he like Caylus, but playing with him constantly making fun of how pathetic your play is makes the game almost fun. Besides KingPut is all AT a heart, he know where the fun is and that is is not pushing cubes.

Our resident PHD is Cody (or Cory or Trevor who knows his name). Dr Sandifer is smarter than all the rest of us combined. this dud teaches Math and lets just say don't play his ass in a Knisia game. Cody is always a tough opponent and will throw down some of the more euroish AT titles. I believe he is on pace to take the Cup from Joie this year, we will know in 2010 when Bobby Tweaks ' Luddite Ass gets around to running the numbers.

Deuber was an accidental find via Danbuster, but he has become a regular. Matt like the At games and is a reformed ALS Junkie. Loves to toss the dice and is nearly as bad at it as Joie, who I have witnessed dice land on a 6, grow legs and flip to a 1. Matt's war game past makes him an early volunteer for At titles and any war games that get played.

G-Bubs is a former co-worker with Myself and still works with Joie. Rob and I go way back with GW and 40k, we were (Are?) both outriders for GW and would play every other week before game night existed. He is also a regular at the work happy hour that happens every week before game night. Rob will always play Ti3 and so is worth his weight in gold. He also can be counted on to try and screw Joie over at about every opportunity. A big CDG fan he will corner you and convince you Wellington is your favorite game if given the chance.

Army Pete is a new comer, and will be headed back to Afghanistan soon, so we are bummed about that. Pete is the master trader, recently proving his stuff by securing a sealed copy of We the People. Pete is also the only guy to get a chick to come on more than one occasion to game night. Anita has humored us a few time and usually shows up and plays (and wins) Euro's. When is lady isn't around Pete will play about any thing.

The Chef, is "The Steak's" lil bro. Kevin shows up late every week, but always brings 2 gourmet pizza's. Also a big beer guy he usually shows up with something g interesting to drink as well. His late arrival limits him to what he gets to play but he will usually play anything, it is the rest us us worrying about work the next day that keep the games short at this hour.

Tall Phil is our in house photo journalist. Phi's primary reason for showing up is to shoot the shit with us and shoot photo's. His stuff can be found here:

Phil has become familiar with most of the games we play and will usually sit in for 1 each week.

Chuck is a wargamer, and only semi-regular at this point. For a while he came every week and was subjected to whatever we were playing at the tim (usually not his kind of game) but Chuck is old school and patient. He is not retired and gets to game all day long but still shows up when his early sessions end in time.

John H is our resident non-gamer. John plays games but he shows up to drink beer. He is learning the ways of the gamer, and is starting to be a challenge in a few games, but he excels in things that he can play with a beer in hand. This man was born to play Crokinole.

Well that is them... the cast of characters in my gaming sitcom. If you have a group of guys like this then consider yourself lucky. If you do not then get to work. Here are things to remember is starting your own group.

Consistency - Hold game Night at the Same time Each Week or month in the same place. It helps a lot if there is no question as to where and when to go. guy will just show up, no planning needed. This is the single most important thing.

Baby Steps - Do jump right in and try and play Die Macher or TI3 the 1st week, heck even the 1st year. Play games that anyone can handle, make it more about getting together than about getting your games played. Over time the gaming will get more serious. When we started it was all PR, TTr and crap like that. Now we play TI3 and war games in addition to the deeper Euro's. Be open minded, remember having fun should come first.

Encourage people to bring friends. As long as you follow the rule above this should work. Maybe they are not a gamer but are free every week at the right time. So what if they sit on the couch and watch the ball game, at least they are there and you can talk to them. Sooner or Later they will start playing games.

Do not tolerate bad behavior. I have been lucky here, and we group police this but if there is a jerk who ends up showing up either address his attitude or ask him to not come.

Remember this is the best thing you can do to get more games played, but keep in mind that has to be a secondary goal at the start. Establish the event as a place to be first, then let it slowly turn into a group of gamers.