Arkham Horror with the Girls 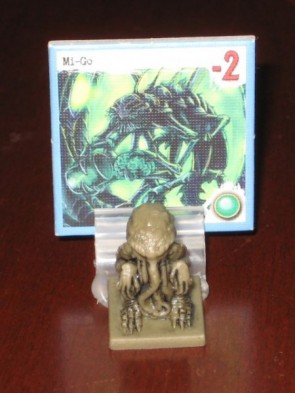 The Spawn invited her cousin, Ghost, and her friend, Kindle Girl, over for Arkham Horror and a sleep over on Friday. This kind of took me by surprise, since The Spawn has never played Arkham Horror, and doesn't like games that last more than 30 minutes.

The first thing she asked when we sat down to play was if the game was really going to last for 8 hours. The game did last 4 hours, with a break for pie, and The Spawn spent a good deal of it standing  up (she just can't sit that long). I tweaked the game a bit so we were playing in easy mode. It was pretty much a cake walk for the investigators. For veterans it would have been a rather dull game, with few tense moments, but the girls didn't realize this. They spent most of the game in fear of their characters dying a horrible death, although none of them ever got close to it. I think this game wins the prize for the most time spent in the Hospital and the Asylum, as whenever the girl's characters where down even a couple sanity or life points, they went directly for the heal up.

I was getting a bit worried that the girls were going to decide that Arkham Horror was a bit long and dull, as despite my love for the game, it was beginning to feel that way to me. But, no, once they sealed that last gate, and did their victory dance, they all declared the game awesome. They decided, however, it would be even more awesome to play with just their friends, rather than us boring grown-ups. Ghost, who is an experienced player, was the voice of reason and explained that the rule book was about a zillion pages long, and there was no way they could run a game by themselves without a bit more practice. So, yay, I get to run at least one more game for them this summer to teach them a few more rules before they abandon me.