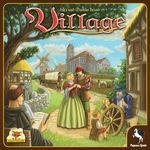 I was totally surprised to learn that a game I liked had won the Kennerspiel des Jahres Award. Several months ago The Village had some buzz among the women in the internet board game community. It was almost totally based on the game's theme and a brief description of the game play. Only a few gals had actually played it. It seemed like something my Euro-loving gal gamer friends might like, and since I' m always looking for a good compromise game so I don't have to be polite and sit and smile through another hand of Dominion or the horror that is Hawaii, I tracked down a copy and bought it. I figured worse case scenario I didn't like it and could sell it or give it to one of my friends who did.

I did like it. I was surprised by how much I liked it. It is a total Euro, but it is a Euro with personality. You are a family in a medieval village. The members choose careers. Time passes. They produce useful things for the family.  They die. Die soon enough and they get written in The Village Book of Honor. Let them live too long and they get buried in unmarked graves.

So I took The Village to my game group, but no one wanted to try it. They had never heard of it, and the fact I was the one who had brought it didn't help. The looked at the cover and wanted to know if it was like Talisman or something like that; which is a fair call as I usually do show up with Talisman or something like it. Finally after a few attempts I got a couple of people (one guy and two gals) to try The Village. They hated it. They couldn't say why, but they just didn't like it, and then they went back to playing Agricola.

Now that The Village has won the Kennerspiel des Jahres Award, I'm wordering how long it will take before the day comes when I show up at game group and their are 4 copies of The Village out and everyone is talking about how great it is.