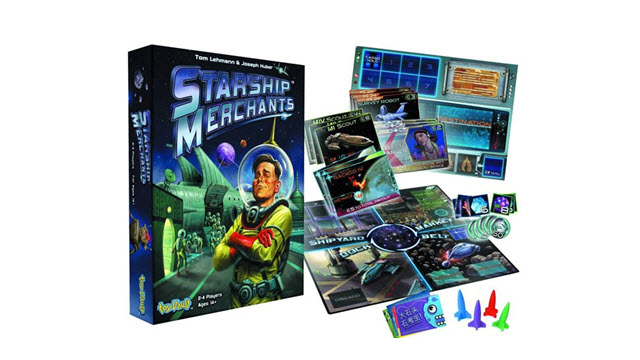 Sorry for the late edition- today was my daughter Scarlett's first birthday so I was occupied with festivities.

As my review at NHS attests, Starship Merchants is surprisingly good. I think it's a great, supremely streamlined business game with more than a little 18xx influence. But it is designed to a fine point, and there is absolutely  no fat on this game whatsoever. I'm sure lots of Ameritrash dogmatists will be disappointed that you don't get to shoot a laser and blow stuff up, but this is a game about making money first and foremost and that's it's theme. The setting is space. I honestly didn't think this was going to be so good, and it's a pleasant surprise- one of my favorites of 2012 so far.

John "Evan Williams" Clowdus sent a copy of Tooth and Nail: Factions. Early impression is that it's almost as good as Omen, and I may actually like it better. Some very subtle innovations, and another game that is masterfully editorial.

Lyssan is looking to be very, very good as well. Rather unexpectedly, it feels more developed and refined than the other Kickstarter games I've played. It's kind of got a Game of Thrones-ish tone, and there are some really cool opportunities to be a complete bastard. Definitely some elements of Diplomacy.

An old one that showed up on Worthpoint finally about the Blizzard board games...

Also did one on the 1.2 million video game jackpot.

I turned the PS3 on for a while to play some Persona 4 Arena but that's it. Slow week for video gaming. I don't know that I'm particularly interested in anything coming out until Dishonored, Halo 4, and maybe Borderlands 2.

Not sure if it's still going on, but most of the Sage Board Games titles were .99 yesterday. This includes Tigris & Euphrates, Le Havre, Ra, and Medici. I bought Le Havre, got immediately confused, and haven't tried it again.

Puzzle Craft looked promising- another line matcher with a bigger game bolted on. This time it's a city builder. There are some neat ideas- if you want to mine for silver and ore, you've got to make food in the fields by matching chickens and wheat. It kind of has a Settlers-like building scheme. But after about an hour, I realized that I was busy but not really playing a game.

Lots of irons in lots of fires. I started on the Bendis/Maleev Daredevil. Believe the hype. It's really, really compelling. Bendis' writing is actually pretty great on it, and I've decided that when he really knows and cares about a subject- like the dark crime drama in these books- he's good. When he's writing something that he doesn't really get or care about...well..uh...I...huh...you know. Yeah.  That...that's when he...fills pages...with stutterring, halting dialogue.

Read more of Morrisson's Batman run. I just went through the Club of Heroes storyline, and it was _amazing_. It's basically a very traditional Old Dark House murder mystery about a failed superhero league that a rich guy tried to found, but the only "name" hero that signed on was Batman...and he couldn't be bothered to attend the meetings so there's some resentment. I really wish that I had not read Batman Incorporated because it was totally out of context and I panned the shit out of it. But now, reading where all of that stuff originated, I get what he's doing. And it may be the best, most sophisticated regular Batman run ever in print. I can't wait to read more.

Started on Runaways, and I like it- the teenage thing works for Vaughn. It's a cute book, I'd love to hand it off to a 14-15 year old just getting into comics. Started on Blackest Night, which kicks off with a quite interesting sort of rumination on death in the world of super heroes, lots of great Green Lantern material and it's in that overblown, Secret Wars-ish superhero pageant style...so EVERYBODY'S in it.

Did not like the Teen Titans "Judas Project" storyline at all. Dated and boring. Robin Year One was pretty good. The first eight issues of Nightwing (Chuck DIxon/ Scott Beatty) were awful. Some of the worst art I've ever seen.

Wow, I am hooked on Young Justice. DC's animated stuff is almost always great, this one isn't any different. It's very geared toward teenagers, and as such it's youthful but not in a condescending or insulting way. A couple of young sidekicks- Robin, Aqualad, Kid Flash, and so forth- get rebellious about how the Justice League treats them so Batman sets them up to be sort of a covert ops/recon team.

The writing is really good- it's definitely on par with the best Justice League/Justice League Unlimited material. I really like Superboy's character in particular- he's PISSED, impulsive, and reckless. There's a neat thread were Superman, who is his de facto father, doesn't really know what to do about him so he more or less ignores the kid. Bruce has a sit-down with him and says "this kid needs his dad" and Clark gets huffy and leaves. It's an interesting take on Superman, that it turns out that he's an absent, crappy father.

I bought the DVDs last weekend and I've watched all but three of the 26 episodes.

Deathly Hallows 2 was great, a fitting end with some terrific emotional beats. Yes, I cried at the end. Snape's revelation was heartbreaking. Neville Longbottom's moment of heroism was awesome. The Battle of Hogwarts was exciting and the looming sense of mortality was palpable. I'm glad to finally be done with the films but now I'm left wishing that there were more. I'm almost inclined to state that as a whole, they're a better fantasy film series than Lord of the Rings.

Used bookstore had the Game of Thrones box for $20, so I'm going to try it out...hopefully my  "Harlequin Romance for people that wear wolf T-shirts" opinion of the novels doesn't carry into the show.

After seeing the Pet Shop Boys singing "West End Girls" on some kind of rickshaw at the Olympic Closing Ceremonies, I've been going over their catalog again. Such an astonishingly great synthpop duo, second only to New Order in a ranking of the best of their kind. So sophisticated, urbane, and intelligent with superb songwriting and a massive flair for the dramatic.

"West End Girls" was the first 45 I ever bought. I remember seeing a MTV News thing about them, and they made a big deal about how goofy their name was. But I loved the song, and I still do. In retrospect, it's not half the song that "Left to My Own Devices", "What Have I Done to Deserve This", "It's a Sin" or "So Hard" is, but it's still a masterpiece and one of the best pop singles of the 80s.

Traditionally, I've usually reached for the singles collections (Discography in particular), but I'm finding the albums and the "Further Listening" sections from the remasters to be immensely rewarding. I'm stuck on "Introspective" and "Behavior" in particular.

It's funny, I saw them on the Nightlife Tour and it was absolutely incredible- a huge production with sets, costume changes, dancers, massive video screens paying tribute to Dusty Springfield, and an ocean of shirtless men singing along to "Se a Vide e". But the next time they came to Atlanta, three years later, it was a TERRIBLE show. Neil Tennant seemed like he just did not want to be there and his signature voice sounded like crap, they did all of this boring acoustic stuff, and the production was basically a bunch of lightbulbs. I don't know if they just blew their money on the Nightlife shows, weren't feeling the venue (which was this weird, unsual place in a Hispanic shopping center), or if it was just fatigue. But it was such a surprise after the triumph of 1999.