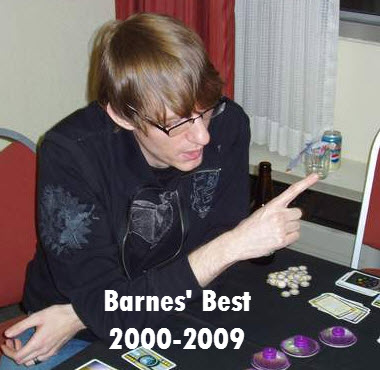 Barnes’ Best, 2000-2009. Shut up about it, I’m finally done with that series. I have another one in the wings since I’m finally through there, something called “The Five Oppositions”. It’s going to be all arty and stuff. Watch for it sometime soon. Probably after some Cracked LCD classics and another Games from the Crypt. Gotta quit with these series…

Nothing new on the table this week, but my good buddy Ryan (aka “Hobbytown”) is leaving for Boston so we’ve got one last Cosmic Encounter-athon scheduled for Sunday. Angry that a friend would be so selfish as to betray me- and the rest of the Hellfire Club for a career.

Mice & Mystics is out, but according to Colby they’re not doing review copies until the second shipment so I’ll just have to hear about how awesome it is from some of you people.

Hey, I put my X-Wing stuff in a Plano box! If that doesn’t mean it’s a keeper, I don’t know what does.

XCOM. Holy god, what a game. Take the X-Com you remember, but make it actually mature and evolve to be a 2012 game with…get this…a very board gamey design approach and that’s what the new one is like. One of the design team members is none other than Ananda “I designed Twilight Struggle with Jason Matthews” Gupta, so maybe that counts for something. The game is a stone cold masterpiece, quite possibly the best- and most concise turn-based strategy game released since…I dunno. It’s definitely streamlined and more accessible then some may want, but I think they’ve perfectly pared away all of the not-so-good stuff about the original game and made it something very now.

I was totally getting slaughtered at first, but then I remembered the wisdom of F:AT- “lay smoke you dick and use overwatch”. A practical application.

In the throes of XCOM mania, I bought Aliens versus Humans. Played it for approximately three minutes and got distracted by something else. Looks like it might be a pretty good facsimile of the original X-Com.

Boy howdy, does Ex Machina suck. Should have known, since it’s Brian Vaughn trying to write for adults. It reads like a Z-grade midseason replacement TV show. I read the first couple of story arcs and I was just utterly bored by it all, I don’t really know how I made it so far. Uninteresting characters, uninteresting situations, and an overarching sense that the writer thinks this stuff is really smart and adult for a superhero book. Too bad it’s terrible.

Tried to get into Archer & Armstrong, but I’m just not feeling it. It doesn’t help that the first few issues are part of a huge Valiant crossover. I’m also just not getting the characters. It all feels very second string…something you’d buy out of the .25 cent box for the hell of it but you’d never want to pay full price for it.

The “blown away” book this week though is Puma Blues, a sort of obscure titled published in the mid to late 1980s by none other than Dave Sim, through his Aardvark International imprint. It’s an oddly eerie, subtle science fiction story with political and ecological subtexts. The art is done by Michael Zulli, who went on to do several issues of Sandman, but it’s all scratchy line drawing- strangely effective, in much the same way that Eddie Campbell is effective. The story is compelling- mostly about this guy that’s kind of a wildlife relocator living in isolation, zapping flying manta rays with this gun that reconfigures their molecular structure elsewhere. But then there’s a group of terrorist racists that stage a coup, killing the president and nuking the Bronx. Lots of very punk rock, 1980s politics. I’ve just got a couple of books, but I’d like to see the whole run. Definitely more of a Tarkovsky-style Sci Fi than a Lucas one.

Also continuing to plow through Judge Dredd. The Judge Child Quest was fun with lots of goofy vignettes (Dredd gets killed by a Necromancer, eaten by a frog, and has serious issues with another judge’s moustache), but it wore on a little long. Loved the Angel Gang and Mean Machine, but I got eager to get back to Megacity One. Once there, I read through the Otto Sump story and a couple of others that were just freakin’ great. Laugh-out-loud funny stuff, cool science fiction concepts, and that classic 2000AD sense of satire. It’s funny, when you get to a Brian Bolland penciled story, it’s like the quality of the art just suddenly goes through the roof.

Other stuff- Spider-Man Blue  by Loeb and Sale was kind of nice…definitely minor, but nice. Love their take on the Green Goblin.  More Doom Patrol, the much-maligned “Space War” story y’all were talking about. Definitely feel like Morrison was messing around too much in that, but it’s not horrible. Also finally got my Doom Patrol archives books, digging into those this week.

Making the Halloween rounds, hitting the Universal stuff but moving on to the American International/Roger Corman Poe stuff this week. Such great movies, the American version of what Hammer was doing in a lot of ways. They’re very handsomely made films with just the right touch of gothic horror kitsch. It’s a toss-up between Tomb of Ligeia and Masque of the Red Death for the favorite…most bets would go with Masque, and it is probably the better film but I love Ligeia so freakin’ much. Watched Tales of Terror last night, the anthology, and just absolutely loved it all over again.

Also caught The Black Cat on TCM, one of the all-time great classic horror films. Lugosi versus Karloff in a very sophisticated, urbane, and modern gothic story. They also showed The Devil’s Bride (aka The Devil Rides Out), one of the best Hammer films, the other night. Christopher Lee is actually the good guy, but what do you do when Satan himself is the bad guy. Creepy film, definitely among Terence Fisher’s best work with the studio.

I’ll probably get around to Night of the Demon, Tombs of the Blind Dead, Jess Franco’s great Count Dracula, and probably a couple of the Val Lewton films this week. I’m thinking Seventh Victim and Isle of the Dead. Kind of Cat People’d and I Walked with a Zombie’d out, as great as those films are.

Sometimes I forget that Echo and the Bunnymen are one of my favorite bands. Strange. But every couple of years, I sort of forget about them until I put on the box set or a random album. This time, it was Heaven Up Here, widely regarded as their least accessible, most experimental record. When I first heard it long ago, I didn’t’ care for it because it didn’t have a “Do it Clean” or a “Killing Moon” on it. Not even a “Back of Love” or “The Cutter”. It’s their darkest, densest, and by far most post-punky record, falling somewhere along the spectrum of early Gang of Four and “Pornography”-era Cure with a dollop of Joy Division in there…and the usual Doors references. I’m really digging it, and I’m probably going to load up “Porcupine” next.

Discuss this article
Log in to comment
Posts in discussion: Barnestorming #94.23- Barnes Best 2000-2009, XCOM, Puma Blues, Echo and the Bunnymen