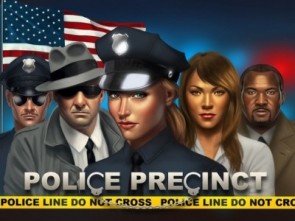 I can not stand the creepy, over-processed artwork in Police Precinct and you’d be hard pressed to find anything original about the game other than the Hill Street Blues theme, but I really liked the game. It’s fun-first, easy to enjoy, and I love that it’s cops and not elves, space marines, or burgomeisters for a change. Here’s the review.

It didn’t take long for someone over at BGG to comment about how the game is “dripping with theme”. It’s not. It’s barely thematic  at all, at least on a conceptual level. The mechanics could describe just about anything with the right fiction and fluff. But that’s OK given the relative light weight of the game and the overall accessibility of it. The shared storytelling and narrative make up for the lack of conceptual theme, and that means a lot.

Oh yeah…unlike Frank Branham, who put my name in the Battle Beyond Space rulebook in freaking Comic Sans, the folks at Common Man named one of the streets after Tom Vasel. When do I get that kind of respect?

I finally got hold of the FFG Merchant of Venus and…you’re a dumbass if you think they didn’t completely ace it. It’s  a Cosmic/Wiz-War class reprint, not a Dungeonquest/Dune one. The most surprising thing is that the redeveloped game seems to be actually better than the original- even with some extra gewgaws by way of mission cards, events, and some other stuff. I like the streamlining- the game plays smoother, makes more sense, and doesn’t feel old fashioned at all. Production is spectacular, love that the original game is included in its entirety…the four player cap stinks, but it’s acceptable. Realistically, it’s best as a 3-4 player game anyway.

A mysterious and very generous benefactor here at F:AT sent me a GIGANTIC box of Monsterpocalypse, so I hope to get to try that soon. I laid it all out last night and was completely and totally overwhelmed. I’ve got like 35 buildings, tons of Planet Destroyers, Shadow Sun Syndicate, Guard, Apes…I flipped through the rulebook and I have no idea how anyone ever learned how to play it. What a terrible idea to have different icons for each faction and like 50 for each. It looks awesome though, once you set up the buildings and put some dudes on the map.

You know what sucks? Emailing a press contact to get a review copy and getting the reply “Oh, we’re sending one to Ken B.” DON’T THESE PEOPLE KNOW HE IS NOT AT THIS WEB SITE ANY LONGER?

Still playing DMC…I think it may be second only to Bayonetta. There have been a couple of levels that were just mind-blowingly well done- satirical, smart, and very modern. There’s a boss fight where you square off against a Bill O’Reily-like conservative news pundit that has to be seen to be believed.. There’s another where you fight a giant demon baby and its mom at a disco. I think we may see this game on my GOTY list come December.

And it’s also free of most of the current AAA development bullshit, which is refreshing. Like those microtransactions that are going to be in Dead Space 3. I’ve decided to not play it at all, and I wrote about it over at NHS.

About once a day, my iPad plays a little fanfare to let me know that it’s time to beat Matt Thrower’s Allied ass. Why are you not playing Battle of the Bulge? I should be getting that fanfare for all of you.

I accidentally read the first issue of Uncanny Avengers, the new Remender post- A vs. X book…I’ve been avoiding anything to do with all of that nonsense, but I’ll be damned, it was really good. It’s total trash, some nonsense about Red Skull grafting Xavier’s brain to his and using his powers to stir up mutant hatred. It’s oddly lurid, preposterous, and REALLY brightly colored. The second issue has a crazy psychedelic image of Red Skull on the cover that I love. I dunno, I’m really liking it three issues in…something about Red Skull running around NYC convincing Joe Public that they can “see” the X-genes is pretty cool.

I had actually meant to read Avengers Assemble, the book Marvel did last year as an “entry level” title with no continuity and no connections to any of the awful “event” stuff. It’s Bendis and Mark Bagley, but it’s actually pretty decent in spite of them being on board. Very light, you read it if you want to see Cap, Hulk, Thor, and Iron Man do their thing without a bunch of stupid Dark Avengers, Norman Osborn, House of M shit going on. Each issue takes about three minutes to read. And it’s a Bendis book. Thanos just showed up four issues in, so shit is about to get REAL.

I tried some of the more recent Black Panther stuff since that’s a character I’m not that familiar with but like…it was really bad. John Romita Jr. artwork sucked. The writing was trying WAY too hard to be political and racially sensitive, which it didn’t need to be. I love the idea of Wakanda and I love that the first part of the book is basically the US having no idea how to handle a country full of brown-skinned people with better technology, culture, and civilization…but once it gets into the Superhero pageant stuff it sucks. Dumb villains, stupid dialogue…big disappointment.

Batman Incorporated this week was awesome. It was one of those Grant Morrison “catch up” issues, where he tells you what the hell has been going on for the past four books.

Speaking of Grant…Finally finished Doom Patrol. What a poignant ending. The last book, “Planet Love” was as good as the first two.

This week I think I’m going to read some Valerian and Laureline, Thorgal, and try to get back on with Scalped.

I finally saw Cabin in the Woods. What a brilliant mess. It’s hard to discuss without spoiling the shit out of it, but I will say that one of the main issues I had with it was that it was way too obvious what was going on from like, the first ten minutes. The big reveal was one of those “no shit, Sherlock” moments. Not a surprise. I wonder if that was intentional though, something the writers knew that horror fans would pick up on it right away.

There were some things that I thought were just astonishingly well-thought out. Like the “selection” scene. The J-horror parody was priceless. And of course, the last 20 minutes, which were more bonkers than just about anything I’ve ever seen in a mainstream film. The problem is that if you think about some of the concepts in the movie for more than about five minutes, it falls apart.

I feel bad for Chris Hemsworth. That man no longer has his own identity. He is Thor. The whole time I just wanted him to bust out Mjollnir and take care of business.

It’s funny because I’ve had three people recommend that I see the film after I’ve made comments about loving fish people.  I see why now.

Late at night when I’m having my one-man game nights, I like to put something random on Netflix. Lately it’s been Matt Smith Doctor Who, but I got to thinking “there has to be a SF show that isn’t completely fucking awful that isn’t called Doctor Who, Battlestar Galactica, or Star Trek”. I tried a couple of the Star Trek series I never watched but I absolutely hated every one- Deep Space Nine, Voyager, and Enterprise. Hated ‘em all. So it’s strictly Kirk or Spock for me.

I tried Firefly again. I lasted up until the stupid, smarmy dialogue and backed out of it. I couldn’t get into Red Dwarf, although I used to like it back in the late 80s/early 90s. So I wound up watching Lexx, a show that I once turned on, saw that completely horrifying robot, and stopped watching.

What a crazy show. The most surprising thing is that it’s TOTALLY Eurocomics-style SF, like a Jodorowsky book or something. Everything from the comedy to the scorpion ships to the  goof-ass costumes to the sex is pure Metal Hurlant. I’ve only watched the first “movie” but I was surprised at how much I liked it…and was surprised that ANYBODY liked it. Not what I expected at all, I thought it would be the usual Babylon 5/Stargate crap.

That robot still scares the shit out of me. I don’t know why.

I actually didn’t listen to anything this week other than the new single from The Knife, which is fucking awesome. Can’t wait for their new record, “Silent Shout” constantly threatens to break into my ”favorite records of all time” list.

Discuss this article
Log in to comment
Posts in discussion: Barnestorming #5-0: Police Precinct in Review, Uncanny Avengers, Cabin in the Woods, Lexx