Next of Ken, Volume 73: All Apologies 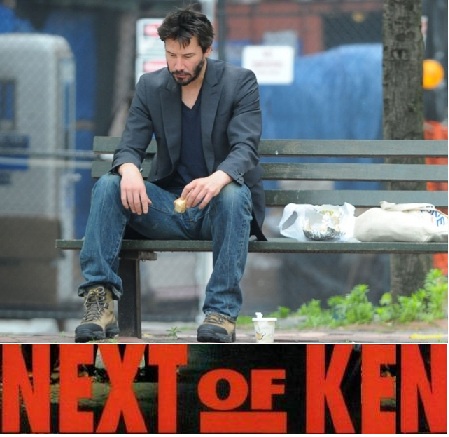 Getting back on the horse. That's the hardest part, isn't it?

This is the part where I offer profuse explanations, torrid excuses, and flounder and grovel while, like the proverbial Stella, trying to get my groove back.

And see, that's part of the reason I've been gone so long.

You miss a scheduled week, you're thinking, "well, I'll need to tack on an apology to that one." But then the next week rolls around and you're covered up with work, so you think, "next week, only with more apologies." These things keep stacking up until you end up needing a column that's a two-part apology, hopefully with cute pictures of Sad Keanus or something similar.

I have to admit I've had writer's block, but not truly in the traditional sense of the word. I've had this nagging feeling that my gaming trends aren't synching up very well with our traditional readership. For one, I've played a hell of a lot of Magic: The Gathering over the past several months. Those of you who were a little weary of me looking for elements of Magic in every game I played are probably grateful, and have been shouting "GET A ROOM ALREADY~!" for quite some time. I get that. I also understand that Fortress: Amertirash isn't exactly a Magic-centric site; there are a host of those out there already with established resources, columnists, and content than I could ever hope to compete with.

You'd think, then, that I'm simply not doing any gaming at all outside of that, but you'd be wrong. I probably game as much or moreso than I have at most points in my life. The problem is, my primary Ameritrash group is sort of scattered and it's been extremely difficult for me to hook up with them on a regular basis. There's a solid Huntsville group with a lot of folks I like to game with too, but again it's difficult to get out there on Friday evenings like I want to.

That means that I am spending a lot of my time playing lighter family-oriented fare most of the time. Most of my reviews over the past year had been trending in that direction, and that's primarily why. And while I realize we have a large group of parents with gamer kids who frequent our site, I don't think that would ever be the hook that brought them here and kept them here.

When I shifted to publishing columns every two weeks, it was for two purposes. One was that yes, I was busier overall with work and life in general, making the weekly column grind more difficult and less appealing. But secondly, I was pacing myself. I was receiving plenty of review games, but at a once-per-week rate, I'd burn through them far too quickly. Plus I wanted to allow myself more time to actually get these things played so I could offer at least a little more than a half-baked opinion on something. I mean, I play a lot of games, and sure you get to a point where you can make semi-educated statements with less information than would be normally needed, but even so...I like to have some idea what I'm talking about.

But that's the bad thing about a bi-weekly schedule, or letting a schedule slip in general. I reached a point where I wanted to get back to weekly content, but struggled to get back to the pace I once had. It was too easy to slip, too easy to say, "they're used to bi-weekly", too easy to put it off for next week. That of course is the poison that seeps in once you miss that second week...and you end up, as I said, fumbling for apologies and wondering just where in the hell you are able to slip back into the stream again.

A few years ago, I did disappear for awhile, but that one was legit--there were some things going on in life that made contributing on a regular basis extremely difficult. In fact, I sold off about half my boardgame collection during that time and rarely felt inspired to game beyond my handful of favorites. There's no such drama this time, only the need to re-establish the focus for my columns and get back in the rythym of regular content.

What does this all mean? It means I'm going to try to ease back into a bi-weekly schedule. But it also means that some weeks, my columns will be way shorter than normal. (You all must know how this pains a wordy bastard like myself.) Some weeks, I may only have a bullet item or two to offer about things that I've played recently. I may babble about games played with the family that have hardly any explosions or killing in them whatsoever.

I'll also likely go back to talking about movies and TV shows that I've seen and offering snap opinions on them. I've always felt like this site should have a pop culture bent to it--after all, my first regular column for this website was a review of Cloverfield (sorry 'bout that)--and even though I'm not in the spot to write uberdetailed Terminator: The Sarah Connor Chronicles reviews, I've found that movies and TV are even more universal than specific boardgames and are therefore more inviting in terms of conversation, comments, and feedback.

So I am genuinely sorry for my absence even though I've been here all along, you just haven't known it. I hope I'm still at the point where I can offer you guys and gals something that you want to read. If not? Well, we'll cross that bridge when we get to it.

Thanks for reading all these years. Now...let's get back to work.