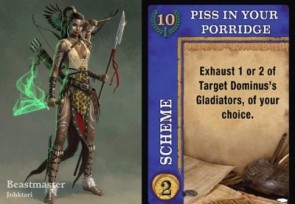 It’s time to look at a couple of new expansions, Serpents and the Wolf for Spartacus and the Conquest of Kumanjaro for Mage Wars. Both of these games were on my 2012 Game of the Year shortlist, which means they’re awesome and you should be playing them. Spartacus in particular, I think that game is really pretty special. Unique mechanics, huge conceptual theme, endless assholery, tons of dice, auctions, miniatures, take-that card play. Yet it’s very playable, easy to grasp, and fun. The new expansion is a must.

The Mage Wars add-on is a little different in terms of its essential-ness. The core game gives you four mages and deckbuilding options galore, a lot of which will never be explored by casual players. So I kind of think of the expansions as being more for the deep-dive players that are playing this game regularly with others committed to it not necessarily at a CCG level, but with some degree of familiarity and currency. I like the new mages, I love that one of them is not a white person for a change, and overall it adds some cool new stuff but considering a lot of folks haven’t tried the core game yet it’s definitely something to buy down the road for most, I think. Here’s the combo review at NHS.

I finally got Legends of Andor and played the first scenario. It looks very, very promising. It’s interesting how the game explains its rules as you play, that’ s a terrific and hugely accessible idea. I am concerned about the replay value since everything runs on a script.  But so far, I love that it’s truly an adventure game.

New on the review copy pile is Five Points: Gangs of New York. I don’t know if has the sand to beat Tammany Hall, which is becoming the next Imperial for my Hellfire Club gang, but it might be good. Robinson Crusoe is on the way. AEG sent over Guildhall: Job Faire (which is much better than it looks) and the new Thunderstone “starter” set. And then there’s Boss Monster…which is really, really close to being awesome. And not just because there’s a genuinely funny Aguirre: The Wrath of God reference in it.

I’m embarking on an epic quest to beat all four of the Metal Gear Solid games after Octavian brought them up in our forums. I’m about ¾ of the way through the first one, just about to fight Liquid Snake in the Hind. It’s really amazing for one thing how much I remember from this game seeing as I haven’t played it since 1998-1999 and for another how incredibly well it holds up. This is one of the games that made modern, 21st century gaming, and its influence is profound.

But it’s also just a damn good video game, regardless of the amount of watching you do. No one involved with anything to do with the game- including the characters- were ever under any pretense that they were doing anything other than video game stuff.

The Cyborg Ninja fight gave me some problems, I actually had a hard time beating him. But I persevered, and eventually he went down and I got that great, old school sense of video game satisfaction that DOES NOT come with quick time events, “golden ledge” platforming, and other examples of game designer cowardice.

The graphics are awesome- highly stylized, obviously dated, but distinct and evocative.

This is truly one of the best video games ever made…and I love how it still feels very much like the ORIGINAL Metal Gear on NES.

Magic, la la la. The Guardians of Light deck is RIDICULOUS once it’s got some cards to swap out. I’m just tearing through everything. Ended one game with 66 life, dealing something like 72 damage in one turn.

It’s interesting how they got around the AI issue, just having the “AI” play certain cards is specific orders and then with a light if-then sort of logic. It works pretty well, but it does take away some of the intrigue of the game- I know that green deck isn’t going to have a Fog  in it, for example, or that blue Storm thing has no counterspells in it.

I tried the new Ravenmark: Mercenaries thing but IAPs and timers abound. It looks great, the original was very much like a tabletop medieval wargame.

I had only read Irredeemable up to #18, so I’m going to polish it off between this week and the next. It’s getting really crazy, the deal Qubit makes with the Vespans is just crazy and sticking the Plutonian in an galactic insane asylum in the heart of a sun is just an awesome idea. The series is still exploring some very dark, very crazy parts of the superhero psyche and I’m coming to think that it’s some of Waid’s very best writing.

But I keep thinking how utterly powerful and devastating it could have been if this were written as a DC Elseworlds-type story and it was just straight up about Superman and the Justice League.

I am going to follow up with Incorruptible, I think.

Finally found a copy of The Incal for less than $100, so that’s on the way. More on why I was hot for it in a second here.

Nobody bothered to tell me that a documentary was released at Cannes this year called Jodorowksy’s Dune. It is exactly what you’d think, a documentary about what could have been the most insane, bizarre, upsetting, expensive, and amazing science fiction film ever made. Salvador Dali as the Padishah Emperor. A washed-up Orson Welles as Baron Harkonnen.  Mick Jagger as Feyd Rautha. Production design by Moebius and HR Giger. Music by Pink Floyd and Magma.  I really, really, really want to see this- the trailer shows Jodorowsky flipping through his production book, which is like a phonebook-sized tome filled with Moebius illustrations for the film. Why has this not been published, somebody?

Anyway, since I can’t see it now, I watched Holy Mountain instead. I can not recommend this movie in good conscience to most people. It’s just not the kind of film that everyone is going to appreciate, but it is the kind of film that some folks will just hate outright and decry it for any number of reasons.

Thing is, the movie is a masterpiece. It’s transcendent and profound. It is also outrageously pretentious, silly, absurd, and baffling. The contrast between those sets of adjectives is thrilling. It is pure surrealist cinema in the Bunuel mold with some incredible imagery of a scope unexpected from this kind of film (likely thanks to something like $1 million contributed to the budget by John Lennon and  Yoko Ono). There are some incredible scenes and insane ideas- “psychedelic shotguns, rock n’ roll weapons”. It’s  filled with overt and subtle references to the Tarot (the system of psychological symbolism, not the phony fortune-telling thing) and alchemy. It’s strangely uplifting in a spiritual sense, and oddly inspiring.

But most people probably ought not see it, it’s just not mainstream in any sense of the word. I like it better than El Topo, and by quite a wide margin.

Lots of reggae and ska thanks to the discussion that broke out in Matt’s post this week. Mostly Desmond Dekker, who is absolutely the “King of Ska”, no exceptions. Spotify has (I think) all of those great Trojan box sets from a couple of years ago, pile ‘em all into a playlist and hit shuffle and you’ve got hours and hours of great Jamaican (and English) music.

Also listening to the new Pet Shop Boys, “Electricity”…it’s their hardest, most dancefloor record since “Nightlife” by far. No more winsome, bitter, mopey stuff. I like it quite a lot. Didya know that Neil Tennant was an editor at Marvel Comics before he started writing about music? Crazy.