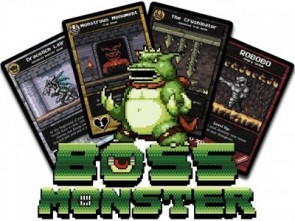 Boss Monster is freaking great. But it’s Kickstarter, so that means it doesn’t have that level of polish that professional development provides. If this game had been published by Z-Man or another company invested in the product and willing to shepherd it to publication, it could have been this year’s King of Tokyo.

The game is awesome. The concept is awesome. It’s the best looking game I’ve played this year. It’s fun, easy, and has some subtle meat on its bones that isn’t quite apparent at first. But it’s missing that last 100 feet or so, some of it being content, some of it being follow-through on some of its best ideas.

But for a $25 filler, you can’t go wrong- especially if you like the NES-era homages or really want to see an 8-bit pixel art rendering of Klaus Kinski as Aguirre. It’s one of my favorite games of the year so far, despite some reservations. Review at NHS.

Playing Legends of Andor…I like it very, very much so far. It doesn’t feel like any other co-op adventure game out there, and I love that the division of labor results in players often doing very different things- siege defence, PU&D, exploration, running interference for someone else’s mission, etc. Very, very cool design. Pretty ballsy to not actually have a rulebook, I was sort of iffy on that but I think it’s a gutsy way to present the game.

Robinson Crusoe is on the way, I can’t freaking wait.

Mayfair sent me a copy of Five Points, which I requested like two months ago. So soon we’ll have a very special Jeff White edition of Cracked LCD with a Gangs of New York double-up- that and Tamanny Hall. Haven’t played Five Points yet, but after reading the rules I’m thinking that it’s a runaway victory for the former.

Really want the new SWLCG “big” expansion, but you gotta buy two to get the double pods. God damn it.

You can’t beat the end of Metal Gear Solid. Bare knuckle, shirts off fight in a fire factory, 1980s action movie style. And it’s on top of Metal Gear Rex. Hell yes. It was just as bad ass as it was 15 years ago.

The battles with Vulcan Raven and Sniper Wolf were also just as awesome. When Vulcan Raven started RUNNING after me with that fucking chain gun, I actually yelped.

Just an amazing game, start to finish. Some of the backtracking to change the key shape toward the end is tedious and some of the controls are horrifying (fighting MGR with the Stinger is awful), but as a whole it’s still one of the very best video games I’ve ever played.

So I started on MGS2, and god damn it, it’s hard. The controls are so complex. I’m about halfway through the Tanker Incident portion so it hasn’t gotten completely crazy and convoluted yet.

I really do not care about any console games right now other than Metal Gear. I’m completely wallowing in it. I can’t wait to play Snake Eater again.

Guardians of Light finally got beat by that stupid Biovisionary deck. One time. The second time I destroyed him. Kor Spiritdancer, Mesa Enchantress…play an aura, Spiritdancer gets +2/+2 (plus any bonus from the aura), draw two cards from both the dancer and the enchantress. Suddenly you’ve got a super fast deck and by turn five you’ve got like a 15/15 unblockable creature if you drew a Spirit Mantle. If it runs long, Sigil of the Empty Throne puts a 4/4 angel into play for each of those auras. This is NONSENSE. I almost want to build this deck IRL.

I’ve been wanting to get back into Ravenmark, but I wind up playing Magic instead.

I bought Breach & Clear, but it sucks. Needed some more time in the oven.

I took another shot at China Mieville’s Dial H, but I just can not get into it at all. He’s trying to do the whole Grant Morrison “I’ll show you something random and then explain it five issues later” thing, but his scattershot surrealism isn’t particularly compelling. I’m more baffled than intrigued. I’m five issues in, I’ll give it to ten and that’s being VERY charitable.

My Incal book arrived so I’m reading through it. The art is just incredible. It’s obnoxiously awesome to look at.

The Gummi Bears DVDs turned up at my beloved Book Nook, so I had to get that for River and Scarlett. The show is unusually good, especially for something based on candy. It’s a rather high quality Saturday morning cartoon with better-than-usual fantasy elements. The bears are typical post-Smurf sort of kiddie fare, but they’re charming. You can really see how this show influenced Duck Tales, Gargoyles, and the other later Disney TV cartoons. I had no idea the show ran for as long as it did, I assumed it ended in the early 80s.

I was pretty disgruntled to hear that Zack Snyder is making another Superman film and probably this Batman versus Superman thing…so I watched the old Chris Reeve picture. The humor is hokey and there’s lots of silliness, but god damn it I wish someone would make another superhero film as positive and bright as it is. Reeves’ Superman is so dead on the money- moral, slightly aloof, slightly naïve…that mix of alien and too human. Hackman is terrible as Lex Luthor, I hate all of the scenes with him and Ned Beatty but the rest of the film is so appealing it kind of doesn’t matter. As much as I love the Nolan Batman films, I wish that filmmakers would realize that superheroes don’t always have to be so dark and tortured. The Avengers is the only superhero film since Superman that gets the FUN of superheroes right. Less Frank Miller, more Jack Kirby. Please.

I have finally seen New Order. I feel like a lifelong quest is at an end. The last time they played Atlanta was in 1989, and at the time I was more into Anthrax and D.R.I. than them. So for 20+ years I’ve hoped they’d come back and over that time Joy Division became my favorite band of all time with New Order appended as a continuation of that band.

We got to the outdoors venue and it was POURING rain. We were like one of only five or six other groups there. I was actually getting kind of upset, thinking it might get rained out. I bought my wife and I ponchos from a poncho man. We sat in the car and waited until more people showed up. It was grim and miserable, we went in and instead of beers or cocktails we got cappuccinos because it was actually _cold_.

So Holy Ghost!, one of the bands in James Murphy/DFA’s stable, opened and they were fine. They did their whole Williamsburg synthpop/disco thing and it rained like crazy through their whole set. We stayed under the roof of the coffee vendor for the whole thing. There was like NO ONE in the amphitheater,  it was strange.

So then a DJ came on stage and tried to get everybody Hacienda’d up, playing a bunch of NO remixes and other late 80s/early 90s Madchester rave type stuff. It was fine. But still raining.

Then, it stopped raining. Literally two minutes before New Order got on stage to their intro music, Morricone’s “The Ecstacy of Gold” from The Good , the Bad, and the Ugly. They opened with “Crystal”, which was cool, and kind of unexpected since it’s a newer and lesser known single. I couldn’t believe I was looking at New Order, let alone people that were in Joy Division.

Then they played “Regret”. I cried. For the next two hours, I pretty much cried the whole time. My wife was embarrassed, but  these songs have been such an integral part of my life for the past twenty years.  I was almost sobbing when they played “Ceremony”.

The setlist was great, mostly what you’d want to hear. “True Faith”, “Bizarre Love Triangle”, “The Perfect Kiss”, “Temptation”, and “Blue Monday”. But there were some great surprises- “Age of Consent”, a completely reworked version of Joy Division’s “Isolation” (again, crying), “Your Silent Face”, and most impressively “5 8 6”. The downers were “World” and “Here to Stay”, which I would have swapped out for “Confusion” and “Everything’s Gone Green”. Or “Krafty” if they wanted to do new stuff. Nothing from “Technique” was performed.

The encore, however, was worth the $100 tickets alone. They came back out, and the video screen played the Anton Corbjin video for “Atmosphere”, which they then performed. Yep, I cried. Giant images of Ian Curtis, crowd going nuts. Sumner said “we’re going to play a couple more Joy Division songs, it’s time that we reclaimed them.” Then they did “Shadowplay” and of course “Love Will Tear Us Apart”, which culminated in the video screen displaying “FOREVER JOY DIVISION”. That’s right, cried.

I love that they’re not trying to run away from being Joy Division anymore, I love that they celebrated their past- they really were aiming to please longtime fans with lots of images and sounds from their history. All of the Peter Saville stuff, those incredible album covers, classic video imagery like the William Wegman dogs from “Blue Monday” and the avant garde dancers from “True Faith”.

All in all, it was amazing except for one thing. Peter Hook isn’t with them anymore, and his bass playing is absolutely integral to both the Joy Division and New Order sounds. The guy they had playing bass, Phil Cunningham, has played with them for like ten years now and he’s absolutely capable, but the entire time it was kind of like seeing Van Halen and there’s someone else playing guitar. Plus, Hooky’s roughneck attitude and style is visually important because it offsets the icy cool of Gillian Gilbert and Steven Morris as well as Bernard Sumner’s more mannered and sensitive character.