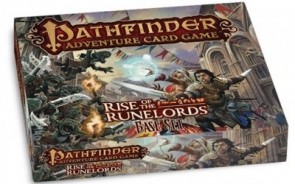 I present you this week's GOTY.

Well shucks, Robinson Crusoe actually is going to have to fight over that GOTY trophy after all. Paizo’s Pathfinder Adventure Card Game is the real deal, ya’ll. The gameplay is simple but fun and interesting, the co-op elements aren’t anything like Shadows over Camelot or Pandemic, and the campaign system is brilliantly and smoothly executed. At first I thought it was too simple, but then I realized that it’s in the same weight class as the D&D Adventure System games- not LOTR LCG or Mage Knight. I’ve played through everything in the box and I’m excited to get the character add-on and run through it again with different sets of characters.

If you haven't read Pete Ruth's 32 page Gen Con wrap-up magazine, do so. It's damn fine work, puts everything else out there about the con to shame. It's here.

I can’t believe what I did today. In Animal Crossing, a Unicorn named Julian wanted to come over to see my house so I told him to come at 2:30. Before he came over, I rushed around to buy some new furniture and furnishing to impress him. What is wrong with me.

Lots of Fire Emblem…Normal seems a little too easy, but I’ve still lost a couple of folks forever.

Mario Kart 7 showed up from Gamefly. Sure, it’s the same as Mario Kart 64, but Mario Kart 64 ruled. Lots of fun, especially online.

Sorry phone, the 3DS is getting all the attention right now.

I actually didn’t get a chance to read anything this week, which is like the first time in a year that I’ve not read anything.  I’ll probably pick up the Grant Morrison Animal Man omnibus and re-read that soon.

I finally caught up to the 2009 Solomon Kane film that practically no one saw. I expected total crap, but it actually was pretty good. I don’t know that it really felt like or looked like how I’d want a Solomon Kane to be, but it definitely wasn’t bad at all despite a last act fumble into dumbness. The modest budget worked in its favor, keeping it from being an ersatz Van Helsing, and there were some pretty cool episodic story passages. Totally worth watching, and way better than most recent sword and sorcery films. Beats the pants off that awful John Carter film and the Momoa Conan picture.

Frank’s post linking to a list of 50 obscure but great movies got me hunting down some oddball stuff. Took a look at Beyond the Black Rainbow on Netflix streaming, and it’s definitely worth checking out. It’s directed by the son of the guy that directed Rambo and Tombstone, and it was apparently funded by Tombstone DVD residuals. It is nothing like either of those films. It’s a very strange, very atmospheric picture. The director wanted to make a film that was like what he imagined all the movies in those strange, weird video boxes in the 80s would be. It does feel like something made in 1981, crossing Cronenberg, Argento, and THX1138 across multiple vectors. It’s not a deep picture, definitely more style than substance, but the style is sometimes pretty awesome.

I also watched Galaxy of Terror, a Roger Corman production. It’s clearly an Alien rip-off, but it’s significant that James Cameron was the assistant director. Because a lot of it feels and even looks a lot like Aliens.

Previously, I lived in mortal fear that I would run into a music snob checkpoint and be asked to produce evidence that I had listened to Slint and fined when I wouldn’t be able to. I can fear no more, because I finally listened to “Spiderland”. The question is now “why the hell did I wait over 20 years to hear this?”

It came out the same year as a popular album from the Generation X Led Zeppelin, back in 1991. That record influenced a lot of really terrible music. The Slint record, on the other hand, seems to be (along with those crazy Talk Talk records no one expected) a starting point for post-rock and it stands as a pretty monumental example of experimental post-hardcore punk…if you want to call it that. I can hear traces of its influence in lots of things, most specifically some of the more avant garde US black metal acts. And Fugazi.

The record is amazing, moments of near-silence punctuated by emotional outburst and intricate, almost Television-like guitar work. There aren’t really choruses or versus, and most of the lyrics are spoken. It’s angular, fluid, and mysterious.

I didn’t like “Tweez” nearly as much. They only made two records. One of them is one of the best records of the 1990s.