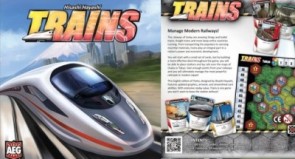 WHAT IS THIS GAME ABOUT???

Trains. Not some clever title like Era of Railways, Chicago Steam, The Possum Pouch-Crapsville 101, or anything like that. Just Trains. I’ve seen some people bitching- boardgamers mind you- about the simplicity of the title. I love it, I love that it’s just Trains. Back to basics.

And that’s kind of what Trains does, in a strange way. It goes back to basics as far as the deckbuilding genre goes, resembling Dominion more than probably any other deckbuilder out there. But it adds a board, geography, mandatory junk cards for building, and actually meaningful competition. All of that counts for a lot to distinguish this Japanese design, but you can’t talk Trains without Dominion and I think that’s something of an issue. It’s one of those “let’s fix it” designs, which I think keeps it from real stand-on-your-own greatness.But it is a really good deckbuilder with LOTS of potential for significant expansion beyond the “more cards” variety, so I’m giving it a good review. It is not, however GOTY.

The review, which I might add is beating Ken B.'s to press, is at NHS. What is taking that guy so long.

Scoundrels of Skullport showed up yesterday and I played a test game with both expansion modules. It seems really good, I like the corruption element, love that you can be both a Mind Flayer and a Beholder, and the new materials seem to add more friction and risk. That 40 point quest, dang. I actually pulled it off. I really like that there’s more theft/destruction cards, or at least there seems to be. Playing the game again reminded me of how really damn good it is and that we should play it more. The sixth player add-on should help get it to the table more with the Hellfire Club gang.

My never-ending quest to decide whether or not I like Legends of Andor continued this week, I played the third story a couple of times and I think Frank’s assessment that it’s really the first one where you’re actually playing the game is correct. It’s everything put together with a random setup, and it would likely be the scenario that I think most would go back to playing again. It is hard as hell to complete the hero quests, stave off the trolls, and beat the boss all before the timer runs out. I like it more than I think I did.

I got Duck Tales since I’m all about the show and the books again right now. Man, it’s harder than I remember. I thought maybe River could mess around with it but I leave the room and I just hear him killing Uncle Scrooge over and over again. The remake is well done- the animations are super fun, and it’s great to hear the character voices. The complaints about the cut scenes are true, and I do wish that you could play the original game without any changes. I LOVE that you can swim in the money vault. It serves no purpose other than to be fun.

Lots of Mario Kart 7, which is addictive as hell. More Animal Crossing, this week I planned a trip to the island and of course I had to buy some new beachwear. I couldn’t be seen there in a rugby shirt and a monocle. I love how there’s always something to discover that’s new and fun. I love that it’s a game best played for about 15 minutes at a time. It makes no demands, it sticks nothing in your face. It’s what a casual game should be. But it still has depth and lots to explore.

I started on Dragon’s Crown last night…it looks really, really good. Very Streets of Rage/Golden Axe/and so on but D&D-ish. The art style is awesome, except for the women who are drawn like some kind of fleshy mutants. It’s Vanillaware, so you kind of know what to expect.

FINALLY finished Irredeemable. Holy freaking shit, the very end of it was amazing. “Maybe somebody somewhere else will get it right”. Wouldn’t possibly spoil it.

It did drag on toward the end, I mean, how much worse could it get. All the stuff with Modeus kind of grinded away although I really liked that Waid took the hero/villain obsession to a logical (and sexualized) extreme. It picked up when the Plutonian’s parents showed up, and I did really like how there was a sense that the Plutonian was wearing down more than he was getting beat down. He was just at a dead end.

In all, I think it’s definitely up there with the best that Waid has done. It was smart, horrifying, reverent, and compelling. I’ll read Incorruptible next.

River has been asking me to read Carl Barks’ “The Old Castle’s Secret”, which is fine by me because it is one of my all time favorite comic books. When I was little, I had some kind of collection of Uncle Scrooge comics and it was in there. I used to read it every time I went to the bathroom because the book was under the sink. I remember it so well, every little detail.

The Serpent and the Rainbow turned up on Netflix streaming, and I had to watch it. It’s one of those I saw in the theater at release and always meant to watch again, but never caught up to. It’s a Wes Craven picture based on anthropologist Wade Davis’ book about researching zombies (the voodoo kind) in Haiti. It is highly fictionalized- and genre-ized- and that’s kind of the problem with it. It’s a compelling story and the real-world parts of it are really interesting, like how the ersatz Wade Davis (played by Bruce Pullman) acquires and makes the zombie powder and some political goings-on in Haiti. There’s a really intriguing story here, but when it veers into horror territory it just feels a little silly. I found myself wishing that the film had the class and atmospheric restraint of Tourneur’s I Walked With a Zombie, which it just doesn’t. There are some really good horror scenes (“don’t bury me, I’m not dead”), but some of it is just ludicrous. Zakes Mondae is in it too, proving that anytime you need some voodoo guy in your picture, he’s the man to call.

I dunno, I enjoyed seeing it again but it definitely wasn’t as good as I remembered it.

I really should buy the other Duck Tales DVDs, season one is wearing out. I’ve finally come to terms that Uncle Scrooge is my favorite Disney cartoon character.

Mostly just some Replacements since I didn’t get to see the reunion.

Discuss this article
Log in to comment
Posts in discussion: Barnestorming- Trains in Review, Skullport, Duck Tales, Serpent and the Rainbow