Next of Ken, Volume 78: Dungeon Heroes, and Romance of the Nine Empires Makes it Meta! 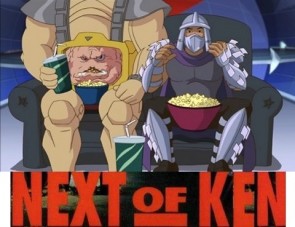 This week I'm exploring the quick-playing Dungeon Heroes as well as wondering how in the hell I missed the 15th anniversary of that classic CCG Romance of the Nine Empires.  Join us, won't you? 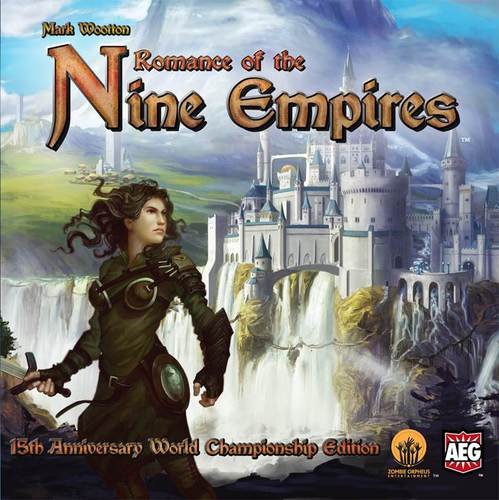 First thing I had to mention--received a review copy package last night that confused the living hell out of me.  It was a game labeled Romance of the Nine Empires.  I hadn't heard of it at all and turned over the box to read about it.  This was...the 15th anniversary set of the "Rise of the Nine Empires" CCG, and these were the world championship decks from 2012?!?  I turned the box back over and looked at it again.

You see, I pride myself in knowing at least a little bit about almost every CCG that was released, especially during their two biggest boom periods.  I know stupid things like there were actually James Bond 007 and Killer Instinct CCGs.  Scooby Doo and Teen Titan CCGs.  On the Edge.  Kult.  Galactic Empires (shudder).  Spellfire (vomit).  So for one to have been released...and be celebrating a 15th year anniversary?  And I had *never* heard even a peep about it before, ever?  What...the...hell?

That sent me off to the internet to go digging.  It turns out that this is in reality a boxed set of a new LCG that was originally the fictitious subject of a Kickstarter movie called The Gamers: Hands of Fate.  Yeah, re-read that last sentence a couple of times, that's sort of tough to let sink in.  The Romance of the Nine Empires property was created for the movie, but now AEG has decided to release a very real product, based off a fake LCG it created for a mockumentary that was launched on Kickstarter.  Uh-huh.

At this point, the damned thing was so meta that it had looped back on itself.  Seeing as how meta is something I eat up with a spoon, I knew I would eventually have to give this a spin.

I haven't had the chance yet to play it--it literally just arrived.  I did open it up and there are five "World Championship" decks inside, along with a small pool of cards to use for further customization of the decks.  These were the alleged decks of the finalists in the world championships last year, and according to the fictional game's fiction, the players' performances in the tournaments further drive the story going forward.  Fittingly, the engine seems to be based on a hybrid of their Legend of the Five Rings and Legend of the Burning Sands games, the connection being that the players have long since had a voice in how the storyline of L5R proceeds.  Mark Wootton is listed as the designer, so that's also a positive.

Will it turn out to be a good game?  Don't know yet.  But I gotta say, this is such a strangely ambitious yet bizarre game--possibly one of the most bizarre I've seen come across the ol' review desk.  I'll definitely give it a shot and get back to you fine folks.  I don't know if I have room in my life to keep up with another CCG/LCG, but the entire premise just intrigues the living hell out of me.

We Could Be Heroes, Just for One Day 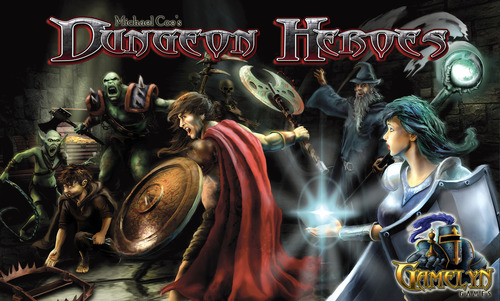 Pesky adventurers looting the treasures of hardworking Dungeon Keepers...what's an evil overlord to do?  We've seen many head-to-head dungeon delves over the years tackling this very subject, and the latest I've gotten a chance to try is Dungeon Heroes.  This one is literally a head-to-head game as two players square off, one as the Dungeon lord, the other the controller of an intrepid party of heroes who are looking to explore the dungeon and make off with those lucrative treasure chests the overlord is looking to protect.

The game is played on a small board with a 6x6 grid.  On one end is the heroes' starting spaces, the other contains one square with a treasure chest.  The overlord has a stack of tiles.  Most of these are fixed but a small subset of them are randomly chosen from game to game.  These tiles contain not only the other hidden treasures the heroes are looking for, but also monsters, traps, and other artifacts.  The game starts with the keeper in what's called 'passive mode' where he or she draws four tiles one at a time and places them face down on any square in the dungeon.  The hero player then takes a turn using his actions to move one of his four characters around the board, revealing tiles as they are encountered.  If a tile is one of the treasure chests the hero player keeps it and is all the closer to winning.  But if it's a monster or trap, watch out as these will harm, kill, or otherwise incapacitate that hero.

The good guys aren't moving completely blindly nor are they totally helpless.  The fighter can mow down monsters as he moves through them.  The wizard can use his magic to reveal any face down tile on the board.  The rogue can disarm any trap harmlessly by moving onto a square containing one.  The cleric is around to help mend up the wounds of those who were ambushed by monsters or fell into a nasty trap.

As the heroes scramble about the board, eventually the Dungeon keeper will run out of tiles to place and will enter 'Aggressive Mode'.  When this happens, any face up monster tiles are replaced by monster figures and each of these now get one action each to move around the dungeon and attacking the heroes.  The game ends when the heroes have found three of the four treasures and the villain player wins if he is able to kill off all the heroes.  And that's the game.

To me, there are parallels to be drawn to Dungeon Twister, a game that I enjoyed when I first played it but the thrill rapidly waned after half a dozen games or so.  Dungeon Twister always felt like it was the wrong 'weight' for its theme--too thinky, too much counting.  I also hated the fact that the combat cards did not replenish after using them all as I would have expected them to.  It really deflated the proceedings when one player ran out of cards, but playing them timidly made for really boring gameplay.  Dungeon Heroes maintains the head-to-head tactical play but it's instead compacted and fast-moving.  The heroes will really feel the timer as the villain player will have blunted fangs during the Passive phase but the carnage heats up once he can go aggressive with the monsters. 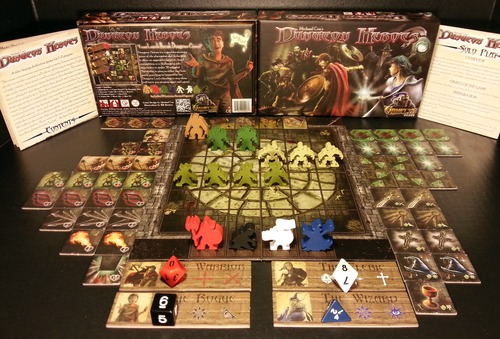 It's also an awesome production in a little box.  All the hero and monster figures are wooden and laser-cut shilouettes of what they represent.  They are honestly very cool looking and sturdy.  If all wooden components in games were this well done I don't think any of us would have ever complained about wooden components, ever.  They're all shaped to match the artwork on their respective cards/tiles.

There are a few negatives I can see.  First up, some folks will definitely not like the deterministic combat.  The game includes four color-coded dice but they are only used to track the hit points of each hero.  The wizard has a d4, for example, representing the max HP of 4.  At no point do you roll dice for combat.  In fact, only the fighter can defeat monsters at all--that's his ability.  All other heroes need to steer clear of the big nasties.  There is a sword artifact to be found that will let any hero kill a monster, but it's a one-and-done deal.

The other is probably the difficulty in successfully playing the heroes.  It seems very tough to win with them--you need speed and more than a small dash of good luck or bad draws by the evil player.  Once the monsters are 'alive' and roaming the board they'll start doing their best to pin down the fighter, and if he falls it's open season on the others.  (There is a resurrection artifact, the Holy Grail, which can bring a fallen hero back from the dead.  The catch?  It's also a one-use item.  And you have to find it first.)

Because of the nature of movement and combat, it gives the game more of an abstract feel than some may be looking for.  It's all extremely chess-like and tactical when it comes down to it, though not nearly at that brain-burning of a level.

Those few negatives aside, I do think this hits just the right feel and weight for a game like this.  It flies by at 30 minutes and you do get to play out a quick story of foolish...er..."brave" adventurers plunging into a dark dungeon and either finding riches beyond measure or else being devoured by ogres, choking to death on poisonous gas, or falling ino deadly spiked pits.  It's a bit like Dungeonquest with an actual thinking brain behind the meat grinder, though even if the keeper has a hot hand it's still much more forgiving than the ol' classic nightmare factory of DQ.

I can't say enough nice things about the production.  The wooden pieces are really cool and the game has an incredibly small footprint.  This is sort of an issue if you want to pre-sort your tiles and keep them sorted in the box as it can kind of be a pain in the ass to get them all back in the box in some little baggies.

There is an expansion set out that is a two-fer-one.  One of these mini-expansions involves the maiden who when revealed joins the party and helps the heroes.  The other expansion has a vile new enemy in the Necromancer, who will make life hell for the heroes.  Also included is a market to help the heroes, where defeated monsters can be traded in for helpful items.  Lastly this expansion includes a very nice felt bag for keeping the tiles in and drawing them from during the game.  These modules are meant to add some extra spice to the base game and keep the replayability high.  Forget about getting it all in one box, though--you'll want to keep that small expansion box too just so you can keep it all together.

I like the game, it's an awesome dungeon delve fix in half an hour.  I should note that my brother did not like it nearly as much as I did.  I think I've figured out one thing about his taste in games--he's not a fan of "life or death hidden information."  That is, a game with hidden information is okay, but not when it can instantly kill you.  Between the spikes, the nastier monsters, and the poisonous death cloud, that's exactly the sort of thing you're looking at here.  As I said, it reminds me of the feel of Dungeonquest, but with a brain behind the evil, compacted on a tight 6x6 board.  It's certainly a fun game with a familiar but attractive theme that is definitely worth a look.

And that's going to do it for this week's column.  Until next time, be on the lookout for acrobatic heroes helping out their fellow citizens.  I'll see ya again in two weeks.

Tweet
Discuss this article
Log in to comment
Posts in discussion: Next of Ken, Volume 78: Dungeon Heroes, and Romance of the Nine Empires Makes it Meta!