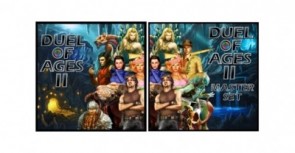 Here it is, the DOAII review. Do not be an idiot. Buy and play this game. In some ways, I think Mr. Murell’s attempt to craft a kind of ur-game/system is successful. But ironically, I didn’t think it was successful at all back in 2003. The new edition isn’t a drastic overhaul, but it’s overhauled in the right ways and the game feels more relevant now than it did in 2003. Maybe it just wasn’t the right time for me, maybe I was too interested in the rising hybridization movement, I dunno. But the takeway is that DOAII is definitely one for the ages. Buy the whole thing. The Master Set is absolutely worth the cost if you like the base game, it’s more of everything and this is a game where you want more of everything.

DOAII has kind of ruined me, other games (aside from Pathfinder and Crusoe) lately aren’t holding my interest. I keep wanting to go back and play another game to see what happens.

Watch this space. I am doing one of my rare interviews with Brett Murrell. It's gonna be good, I think.

But I did get Rob Daviau’s Risk: Battlfield: Rogue (is that you how do it?) from Target, and it should be something that you pay attention to despite the god awful production. It’s a very, very simplified Storm Over Arnhem-style tactical wargame with a terribly under-used modern military theme. There’s some cool mechanics, surprising depth, and some classic “hobbystream”/crossover gameplay- like the shields n’ splats die rolling. Good stuff. I think Frank is right- once this is gone, people will be paying $100+ for it.

Diablo III has me completely in its thrall, I haven’t been so invested in a video game in quite a while. Demon Hunter is now level 23 and I’m using a lot of mobility-reducing skills for crowd control, mostly using the Paladin to do some knifework up close. The game just keeps on giving, I can’t believe I’m only about halfway through ONE playthrough and still totally in it for the long run. That’s one thing I love about Blizzard games, they design with YEARS of play in mind.

Just started messing with Scribblenauts: Unmasked, the DC Comics version of the game for 3DS. Lily, Maxwell’s sister, fell down and needed a doctor. So of course, I typed in Dr. Fate and he appeared, helping her up. Then, Comissioner Gordon’s car was broke down so I thought maybe Mr. Terrific could fix it. The game gave me the choice between Michael Holt and Terry Sloane. I picked Holt, and he appeared with T-spheres. But he couldn’t fix the car. Then I started really messing with it. Doom Patrol summoned every member of every version- including fucking Danny the Street! Suicide Squad, team one or team two. Mogo, Mother Box, Black Racer, Anti-Monitor, Dr. Hurt, Bat-Cow(!!!), Professor Pyg, Blackhawk…there must be HUNDREDS of characters in it. There’s like 8 pages of Batman alone- Dark Knight Returns, Year 100, Year 1, Blackest Night, Gotham By Gaslight…it’s ridiculous.

It’s really too bad that the game is just as terrible as all other Scribblenauts titles.

I’ve been replaying Castlevania: Dawn of Sorrow as well…talk about in my wheelhouse. I adore Castlevania, and the DS ones are all great. I’d love to do Symphony of Night again, but that’s one of the very rare games that I’ve played through multiple times (something like six times, I think).

I really kind of want to get a Wii U again, already…if anyone is trading or selling, let me know. I really want to play Wonderful 101. And I guess I should play Wind Waker.

Still working my way through Armor Wars, it’s pretty good. I think I may get back to the Brubaker Cap stuff this week.

I rented Iron Man 3, and I was really surprised by it. I didn’t much like Iron Man 2 (although I may have just in a pissy mood when I saw it), but I thought this picture was much better even though I can imagine that it’s probably more divisive. I absolutely did not expect the film to be so risky following up from The Avengers and the overall success of the Marvel Cinematic Universe. The film was loose, had a strange structure, and Tony’s barely in the armor. It really kind of touched on some of that old Micheline/Layton material, with Tony down at heel and dealing with the stress of being Iron Man…I really liked that it showed that the events in Avengers had a big impact on him, a regular guy in armor fighting aliens alongside a god, a monster, and a resurrected science experiment.

But of course, and here’s the spoiler part if you want to scroll down, the Mandarin was the biggest surprise.

I was pretty excited to see that the Mandarin was in it, and I thought it was going to be interesting to see how the ten rings and all that were worked into the more grounded, real-world Iron Man storyline. At first I thought the Bin Laden terrorist thing worked but was a little trite. Then the reveal that he was just some goof-ass stage actor was genuinely shocking. Of course I bristled up about it, upset that they ruined the chance to do right by the Mandarin. But then I realized that I actually really liked what they did, and the notion of a corporate/government-created terror puppet was pretty sharp. And then the main villain turns up literally breathing fire in one scene, so the ridiculousness wasn’t really an issue anyway. So there, I liked what they did.

The funny thing was too that it brought in a lot of elements from Ellis’ Extremis book, which I didn’t like at all…but improved on everything.

Still Chvrches. What can I say, album of the year.