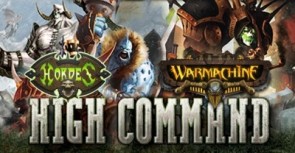 I was hoping to have part one of my epic interview with DOAII designer Brett Murell up today but I want his sign-off and last thoughts before I post. I think it’s good, I hope y’all will dig it. But while we wait, High Command from Privateer Press goes on the slab for this not really very Halloweeny episode of Cracked LCD.

I think High Command is good and the Iron Kingdoms setting/theme is a worthwhile differentiator. But the gameplay strikes me as off. It’s a 45-60 minute contested location card game paced like a DoaM game. Which kind of doesn’t work. The first third of the game feels really slow, the middle part not punchy enough, and the last part over too soon. It’s an interesting game to me because it’s rare to see a game that has this kind of an issue, and I think it’s fascinating to see how that happens. It’s a couple of things- one is how cards are bought, put in your deck, and then they have to be bought again. Another is that there is no “Rushing” (buying a card and putting it directly into play) during the first two rounds. And the event cards that drive the game and are intended to set the tempo don’t really push it forward enough. So it’s turtle-y and not nearly as immediate and violent as it should be. And don’t bother with three or four players, It should be billed as a two player game.

But it’s definitely not bad at all, and if you like Warmachine or Hordes it’s probably worth a look. I have the Hordes version, wouldn’t mind seeing how it interacts with the Warmachine factions.

Thanks to an unnamed F:AT benefactor, I was able to get a hold of the apparently scarce Enterprise and Valdore ships for Attack Wing. The Enterprise has got to be some kind of joke. Certainly Wizkids would not release a miniature of one of the most iconic, beloved spaceships of all time- and in fact the signature ship of the entire Star Trek franchise- in such a shoddy condition. Its smaller than an A-Wing miniature. The disk flops off. It’s barely painted. It makes the game look like no one really gave a shit about it. But it does come with awesome cards, including most of the TOS crew and some really cool upgrades…and the Kobayashi Maru scenario.

Definitely enjoying it- I’ve actually been mixing it up with X-Wing, I got my main X-Wing buddy on board to play and we’ve been alternating scenarios of both.  I had not played with the B-Wings and Bombers yet, the B-Wing rules. Love the HWK-290. The shuttle is cool, the miniature is probably my favorite out of the line.

Gale Force 9 finally sent me a copy of Firefly, and I played the solo scenario last night. It seems like it might be pretty good- lighter than I expected with some obvious DNA strands that smell like Merchant of Venus and Merchants and Marauders. I think the game really nails the pirate/cowboy/spaceship confluence well, and I like the emphasis on crew over the ship. Of course, I famously don’t like Firefly so my review will be the one to look at if you don’t like the show but wonder about the game. It actually did kind of make me want to give the show a third chance.

Gave up on SMTIV…not because it was hard, boring, or uninteresting…but because I feel like I had my fill at 20 hours with probably another 20 to go at a minimum. Great game. Don’t really feel like I have to finish it though.

Getting back into Diablo III, working on that Monk playthrough now.

Iphone 5s in hand, my wife got it for a late birthday present. She didn’t get me the gold one, so I’m settling for Space Gray.

Chick did a write-up of a game called Empire that sounded interesting, so I checked it out. It’s a really unusual design. It’s sort of a super-stripped down Civilization where the blight or whatever it is (essentially Civ’s barbarians) are eventually going to win no matter what you do. There are simple tactical battles, where units have preset move and attack patterns that you alter by playing cards. It’s also a deckbuilding game, where you add cards into your combat deck. It’s an odd, survival-based design with a couple of great ideas, it just never seems to bring them all home. Worth looking at for three bucks though.

Cloud Atlas is probably the first film since, I dunno, No Country for Old Men or There Will be Blood that just completely floored me. It’s a sprawling, stunning, singular experience that by rights should have won every award they give out last year, but it’s also an all-or-nothing proposition that either a viewer is going to buy into or completely reject. And given that it received mixed notices from the press (but Ebert loved it), it’s a three hour film, and it dares to completely defy standard narrative conventions there really wasn’t much hope for it in the mainstream eye.

Which is a shame, because it is a transcendental, affirming film with universal themes of love, death, freedom, exploitation, and the shared history of humanity.  If you missed the memo, it’s effectively six different storylines occurring in different times (and in different genres) that demonstrate the inter-connectedness of events, individuals, ideas, and consequences. There’s a very English farce that runs into a Blade Runner-ish science fiction film with resonance in a 1970s-style China Syndrome-referencing thriller. Then there’s a postapocalyptic far-future thing cross-cut with a South Pacific story and a tragic love story between men set in the 1930s.

For me, it completely works. I understand the stylistic intent of having the actors appear in each story, sometimes in obvious makeup, sometimes in drag. The fragmentation is essential in displaying how the stories are one story, and how things said and done in the past echo into the future in sometimes unexpected ways. Even at three hours, it never bores yet it never stoops to cheap cliffhangers to keep the audience engaged. It’s a slowly unfolding puzzle that always compels.

I found it to be a very positive, uplifting film without any kind of maudlin cheese or melodramatic emotion. It’s really not as complicated or dense as it looks, because what it is trying to say is very simple even though it’s definitely saying it in the long form. It’s a beautiful, moving film with great writing, great acting, and exquisite photography. I think it’ll go down as yet another Wachowksis film that wasn’t properly appreciated or accepted by audiences, along with the two Matrix sequels and Speed Racer.  But I think it will also in time develop a cult following because there’s really nothing else like it. The closest thing I would compare it to is Alan Moore’s novel Voice of the Fire- which I’m almost certain the novelist that wrote the book had to have been influenced by.

Constant Halloween movies going on, nonstop around the clock here. Woke up this morning and TCM was playing Hammer films. Hooray!

Just started listening to Arcade Fire’s new one, definitely good but need to acclimate to it. Took me three years to finally get The Suburbs, this one seems more immediately rewarding.

I’ve also been listening to Queen. Queen is one of the many shameful gaps in my quest for complete knowledge of all rock music. Of course I’ve heard the singles, the hits, the most known tracks…but I’ve never really listened to a Queen album other than compilations. So I’m divin’ in. So far so good…really digging Queen II and Sheer Heart Attack. Freddie Mercury is just as awesome as his hype would lead you to believe, a genuine rock showman with a stunning voice. What I like about Queen is ironically a lot of what I like about Arcade Fire- completely overblown, excessive, and dramatic. Arcade Fire just does it with a detached kind of post-everything irony. Queen was at the epicenter of 1970s rock n’ roll too-muchness.

River and Scarlett really like Bicycle Race. They go around all day singing “Bicycle! Bicycle! I want to ride my Bicycle!”