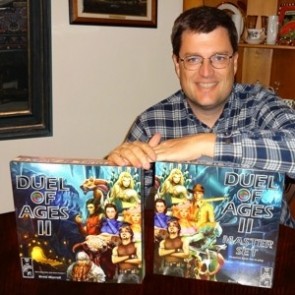 Part 2 of my conversation with Duel of Ages II designer Brett Murrell is here. In this half, we get a lot more into design and theme and I think it’s pretty interesting stuff.  I wanted to split the halves into something more about the product and another more about the mechanics and theme. If you can think of something I didn’t ask or want to know about yourself, ask here- Mr. Murrell is listening.

Still playing Firefly at an alarming rate. I love the solo game. It’s short, fun, and I love that there’s very little setup or takedown. With two or three others, it’s still lots of fun and really pretty unobtrusive so it doesn’t interfere with shooting the shit about kids, movies, or just drinking. It’s just a solid, easy-to-play design with just enough of everything- mechanics, narrative, strategy, randomness.

Next week will be my review of Yedo, a game that is really good…but that I don’t really like.

Not much on the horizon…other than Ogre, whenever Miniature Market ships it. Omega Protocol review soon. After that, who knows. There’s still time for another Game of the Year to appear.

Still deep into Wind Waker…still loving it. At first I thought the new business where you can take selfies and throw them out into the world in a bottle was dumb. But now I’m always going after the bottles when I see them to see what people wrote. It’s kind of like Dark Souls’ messaging system…but funnier.

Pretty close to completing Super Mario 3D Land (the Mario half, at least) with all stars…the game is outstanding with some genius level designs…and I actually like that it’s a little easier than most of the recent NSMB titles. That said, the white raccoon suit is just too much. I call it the cheating suit, because that’s what it is. I almost felt ashamed to use it a few times.

I’m also playing Starfox 64 3D, which is stupidly great. It’s just as obnoxious and silly as you remember, but with some really good 3D effects and gyro controls. It really demonstrates that ol’ Nintendo magic…gameplay focus, charming characters, tons of replayability. I love the cast of animal characters (particularly the smooth-talking bear mechanic that does the tutorial). I love the no-frills shooting gallery gameplay. But above all, I love that it’s kind of designed to be beaten in one sitting because you can take different paths based on successes or failures or who gets shot down during a mission.

I guess I’ll have a PS4 tomorrow…I’m really, really trying to be excited about it. I did grab FIFA 14, because after reading the reviews of Knack it’s the only launch title I’m interested in. Resogun looks pretty neat though. Guess it’ll gather dust until Destiny (maybe) and Metal Gear Solid 5. Oh, and Octodad, which looks amazing.

Rayman Fiesta Run. It’s great. Best platformer on IOS, period. It’s actually made with the same tools and assets as Rayman Legends, so it looks great.

I picked up this random game on a whim, King’s League.  It is HUGELY addictive, even though it’s 100% casual and almost passive. Effectively, it’s like a Football Manager game but with fantasy junk. You recruit dudes, train them, and then send them to quests, sieges, and tournaments. You just watch them fight and manage them between battles, occasionally making decisions about how to upgrade them. It looks like an IAP/timer fest, but it’s actually not. $1.99 buys it all except for some premium characters that seem like they’re not even really worth having. I’ve been playing this stupid thing all day, constantly going back and seeing what happens next, which is almost always a battle. Almost more of activity than a game, but it’s fun.

Meltdown is pretty bad, despite the good reviews. Sort of a new-generation twin stick shooter. Yawn.

After some time off from the funnybooks, I’m back into the Brubaker Cap run, starting on the Captain America Reborn set. It’s already not as good as the 50 issues before. Definitely in a Marvel mood though, rounding up books right now.

OK, so I finished Firefly. I will say this. The show on balance is not bad. It’s sometimes pretty darn good. Sometimes it’s nearly brilliant. But it’s also an absolute train wreck in a couple of ways and it’s no fucking wonder mainstream TV execs axed it. The show is 100% nerd-focused, there is very little to appeal to mainstream audiences in any way, shape, or form like what you see in Battlestar Galactica, Star Trek, or even Doctor Who. It’s made for people who won’t stop to question why there’s all of this old west stuff in some parts of the universe but absolutely none in another. It’s for people who will fall for Kaylee’s silly, mooning, and way-out-of-her league piss-poor line delivery because she’s a cutey-poo girl mechanic. It’s for people who don’t think it’s corny and juvenile for a clergyman to be called “Shepherd Book” and to have a conversation about why the bible is “broken”.

Tonally, it’s a disaster and if I were a Fox suit, I would have said no way from the beginning and there wouldn’t have been more than a pilot. The show swings from very dark (a whole episode of torturing two of the leads, Jubal Early asking Kaylee if she’s ever been raped) to almost Hitchhiker’s Guide to the Galaxy silliness. Again, mainstream audiences do not want this in a TV series. They want consistency and constancy.

But there are definitely things that are good. Fillion is great, and his relationships with the crew feel genuine and complex. I love how he interacts with Zoe in particular. River Tam is a character out of some stupid 14 year old teenager’s fantasy anime script, but I like Simon and their background story. The western stuff works, I love that they load cattle and save a whorehouse. The Reavers are cool, Jubal Early is fascinating, and the whole hospital heist episode was freaking fantastic. I liked the idea of stealing one of the first laser pistols, that was a cool setup.

But it just feels incomplete, and not just because the show only lasted 14 episodes and never really realized its potential. So many ideas feel thrown away, half-realized, or perfunctory. Like it’s really awesome to see Malcolm thrown out of a saloon window and it’s a hologram. But there’s nothing really grounding that concept in the culture other than “some planets didn’t advance and are frontier territories”. Great. But it’s just not consistent, and then the next scene we’re on an Alliance ship that may as well be an Empire ship. There’s no sense that all of this hangs together at all.

This extends to the dialogue. Kaylee is the big offender again, with her “aw shucks, pa” delivery of some of the most cornball phony Western dialogue I’ve ever heard contrasts with characters that speak in extensive slang (Chinese and English) and some that speak in almost none at all. It feels like a jumble sale of styles, applied slapdash throughout the scripts that are, of course, peppered with direct-hit nerd memes. It’s almost _clinical_ how methodically the show targets the kinds of lines that nerds like to quote ad infinitum.

Other than the incessant pandering to the nerd demographic, I think the appeal of the show is more in what it COULD have been, which is sort of a mistake because it COULD have turned out really awful if it had gone on further. There’s too much in it that could have gone either way over time and with more development. There’s also the fact that fucking geeks cottoned on to the idea that THE NORMALS shut down the show because they just didn’t get it, man, and rallied around it, without stopping to say “hey, you know, this was a cool show and all…but it’s definitely not perfect and it’s definitely not something for Joe Public”.

So I’ve kind of made my peace with the show, gave it a full chance, and at the end I wound up thinking it was pretty good after all- especially the much stronger second half of the series. I still don’t get the fandom…but then again, I don’t really get fandom at all.

I’m watching Serenity now, it’s…odd. I’m not sure what to make of it. It seems very different, much grittier and serious despite the . The makeup work is HORRIBLE, distractingly so. It’s also weird that the characters looks so different after just a couple of years. The opening bank robbery where the Reavers but in was pretty cool though. I’ll finish it up tonight.

So there, gorram it.

For reasons unknown, I got that song “Hot Child in the City” stuck in my head the other day. So of course I Spotified it and wound up listening to a Nick Gilder collection. I’ll be damned, it’s really good! Very Cheap Trick-y/T.Rex-y late glam bubblegum pop (I think Mike Chapman even produced one of the records). That song was pretty good, but on the record there were a couple of real corkers- “Roxy Roller” and “Runaways in the Night” both really surprised me- awesome rock tracks. A little research revealed that Nick Gilder was in a band called Sweeny Todd with a young Bryan Adams. Not exactly something great to put on your CV, but I’m glad to have stumbled onto something good.