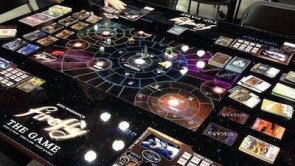 The Best Firefly Game Ever Made.

OK, let’s get that Firefly review in the can. Bottom line, the game is great whether you like the show or not. It’s a simpler and shorter take on the Merchants of Venus/Merchants and Marauders style commerce game with a major emphasis on adventures and crew. Buying Jayne Cobb a knife is as important as outfitting your ship with a new drive. There are lots of very simple, direct mechanics in the game along with just enough detail to really sell the setting. Gale Force Nine seems to be making quite a name for themselves with these cult TV board games. I see that they’ve licensed Sons of Anarchy, which I’ve never watched, but I can’t wait to see the board game.

For some reason AEG likes Ken B. better than me and they didn’t send me Cheaty Mages. Instead I got Canalis, the new Tempest game. Review is forthcoming, but man, I can’t remember the last time I played a game that lacked excitement to such an extreme degree. It’s not terrible, it’s just so…droll.

Thunderstone Advance: Numenera is much better. In fact, I think it may be the best Thunderstone product to date. A couple of minor but impactful tweaks and a very specific (and actually pretty neat) science fantasy setting distinguish this release from the rest of the line. I’ve only played a few games, but I’d be confident in recommending it as the best single purchase you can make if you’re interested in Thunderstone.

Man, the Triforce quest in Wind Waker is a pain in the ass. It completely halts the momentum in the last act of the game. It’s so poorly timed- you just finished two really cool dungeons with unique puzzles and a neat outcome and then you’re supposed to sail all over the damn map to find the pieces. It’s improved from how it used to be (you get a map with the locations, at least), but it still just grinds the game down at the end. Still awesome, but it’s a design choice that I don’t think worked out.

Got to do some four-player Super Mario 3D World over the holiday weekend. What a madhouse. Complete insanity. But quite fun. Probably the best Mario game to date.

I think after Zelda I might try Xenoblade Chronicles again. It didn’t grab me last year, but it was at a time when I was playing other stuff and didn’t focus on it.

So yeah, Waterdeep is really good. Wish they’d fast track Skullport for it.

Skulls of the Shogun is definitely worth $4.99. Very cool TBS with a fun skull-eating mechanic. Definitely one of the better IOS TBS games…but there again, it’s hard to recommend playing it over XCOM.

I’m on a Paul Pope kick right now. I just read Batman Year 100 and really liked it- mainly because of his grotesque, kind of upsetting artwork. As a Batman story, I dunno. But it looked and read good.

But now, his Battling Boy graphic novel…is unmitigated awesome. It’s a very YA-focused book, but it’s super fun with great monsters (including one that just wanders around eating cars and these sinister ghouls named Sadisto, Coil, and Nails), really cool heroes, a unique setting, and good writing. I’m only half way thorugh, but so far I’m loving it. I can see Hollywood execs reading it and seeing dollar signs- in the right hands, this could make a killer teen-friendly superhero movie. It’s very modern, very “now”. I can see kids graduating from Power Rangers and Ben 10 right into Battling Boy. Battling Boy’s dad is a total parody of Thor…there’s a fantastic scene where he calls his pops asking for help while they’re both fighting giant monsters. Great stuff, probably the best comic book I’ve read this year.

I unadvisedly stopped watching DS9 in order, but I found that I’ve enjoyed it more just watching random episodes rather than starting with 1 and going through to 167 or whatever.  The only thing I really don’t like about it (other than the awful Trek humor and the 1990s hairstyles/lighting/set design) is that comes across as very soapy at times.

I feel bad for that kid that played Jake, his costumes were so silly looking. Great characters though, good storylines. I really like that the characters are so bristly- I think Kira is actually my favorite just because she’s so aggressively angry at one or more of the other crew members most of the time. I like Odo a lot too- he takes that whole “you humans, WTF” thing from Spock and Data and makes it more of an aggrieved irritation. Dax is such a weird character, I love the transgender dynamic- really kind of edgy for Trek.  Quark is a little too goofy for meI haven’t really seen what all the fuss is about Sisko...but I’ve also not really watched much of the Dominion war episodes so maybe that’s where he comes into badassery.

The Defiant RULES though, one of my favorite Trek ships now.

Rolled out the Christmas playlist, so of course we’ve been firing up the Phil Spector Christmas record again. That lead me to listen to a bunch of Crystals records. “He Hit Me (It Felt Like a Kiss)”. They don’t make ‘em like that anymore. Jeezus.

While in the 60s, I also stopped Tommy James and the Shondells. If that band only ever did two songs- “I Think We’re Alone Now” and “Crimson and Clover” they’d be just fine. The rest of the stuff is good, but damn, those songs…