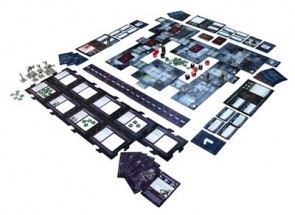 Better than Siege of the Citadel.

Hey, let’s have a look at Level 7: Omega Protocol. This is a really, really good dungeoncrawler that suffers from having a horrendously generic setting and tone. It supports six players (instant bonus), and it does the “overseer versus players” thing probably better than any other game I’ve played. The resource mechanic is smart and there a couple of very modern video game concepts that make for a much more interesting game than, say, Siege of the Citadel. It’s a touch on the expensive side, but if you’re in the market for something like this that’s neither Descent nor Space Hulk or Claustrophobia (and is multiplayer), it comes highly recommended.

My Ogre DE just landed on the porch. I was not prepared. My god, that is the biggest board game I’ve ever seen. It’s really kind of unbelievable, especially since I paid all of $65 for it. I’m really just kind of flabbergasted at it. I opened the box and just sort of stared. I have no idea where I’m going to store this thing. It really is that big. But you know, it’s one of my favorite games ever and I kind of like that the smallest game I own is now suddenly bigger than anything else.

I spent a little time last night punching some of it and playing a solo game of the classic MkIII attack scenario. Yep, it’s just as awesome as it’s ever been. But I have to say that somehow I’m a little disappointed in the DE from a production standpoint. It is totally overkill, and in a way that’s really just kind of obnoxious rather than cool I don’t know that I really need all the Black Rose counters.  Or so many Ogres, trucks, terrain counters, and so forth. I never used some of the stuff in the box before so I’m not quite clear what the argument is to have them now other than just overkill. The quality is also actually not very high, it’s about as good as any other Steve Jackson game, which is to say it’s good for 1992. The graphic design is a mixed bag of great (classic Ogre images) to functional. The boards have that now-common “Made in China” Kickstarter sheen. I guess for $65, I can’t complain much and it is probably my favorite hex-and-counter game of all time so maybe it’s just sour grapes since now I have to find somewhere to store this thing. I literally had trouble getting it through the door to my office.

Gene at GMT was kind enough to send me Navajo Wars (which was delivered right next to Ogre) so hopefully I can get a shot at that before the year’s out. It looks fantastic, and I love the subject matter.

About 8 hours into Xenoblade Chronicles, the second time I’ve started it. It didn’t stick with me when I tried it before, but I had just come off a JRPG bender and was sort of tired of the genre. It’s definitely really good though, and I’m getting more into it this time. Some really smart time-saving ideas…fast travel almost anywhere, anytime. Quests auto-complete and you don’t have to go all the way back to the giver to A button through some dumb dialogue. Combat is interesting, not too dissimilar to the Tales games but more complicated.

A Link Between Worlds is so, so, so, so freaking good. It really does feel like A Link to the Past 2 in every possible way.

Still truckin’ in SM3DW too, which is just magnificent and probably the best game of the year.

Finshed Battling Boy, which is indeed the best thing I’ve read all  year and I can’t wait for the second one, the Rise of Aurora West.

Followed that up with RASL, Jeff Smith’s science fiction noir. It was pretty good overall, if a little silly with the Tesla worship/superscience mysteries that I was interested in when I was 12 stuff. I didn’t really care for the ending and the lack of resolution of one of the book’s more interesting characters, but overall it was enjoyable and fairly light.

That lead me to start on Bone, which I’ve never read. I’m about 400 pages in, and I do think I really like it. At first, I kind of felt like I was struggling against it because it just seemed…I dunno…doofy. But the characters are at this point fully realized and there’s some compelling (and funny) story material. I really, really like Smith’s sense of _animation_ in his panels- really nice use of repetition and gesture.

Read about five pages of The Sixth Gun and realized that I would probably hate it.

I wasn’t a very big fan of District 9, largely because of its juvenile, after school special level of moralizing and political perspective. The follow-up, Elysium is pretty much at the same level but I thought it was a slightly better movie, at least.

Well, kind of. While I was watching it, I felt like I was enjoying it OK.I But when it was over I realized a) that I never wanted to see it again and that b) it was an absolute motherlode of bullshit.

The whole class issue the film raises is almost insultingly pedantic. The eeeeeevil rich people live on the titular space station, the noble poor folks (mostly criminals, according to what the film depicts) live on slumplanet earth. But the eeeeevil rich people have magic healing machines that can cure cancer, so the poor people go up in illegal spaceships to try to land on the space station and break into people’s houses to use the magic healing machines real quick before they get busted by robot cops and sent home.

Wait, is that satire about healthcare in there? Of course it is, because Blomkampf is just about as manipulative a filmmaker as you’ll ever find, and he loves to point out “no shit” morals to the audience. The level of discourse in this film and District 9 reminds me of that bit in the South Park movie where Winona Ryder comes out stage and says “yeah…war…it’s bad”. I’m well past the point where facile, obvious insights about race and class impress me into thinking that an artist has noble ambitions to educate and enlighten the world.

But the irony in Elysium is that the film is implicitly stating that without the civilizing laws and influence of the eeeeevil rich (who all get to live on the space station because they’re all wicked, compassionless 1%-ers), the lower classes basically go wild and turn the planet into a giant slum covered in graffiti and rife with violent crime and post-apocalyptic lawlessness. The rich white people leave, and the entire planet goes to shit, almost to Mad Max levels. I’m not kidding. That is what this film is REALLY saying whether he intended it or not. It really shows how shitty the writing is, how it lacks any kind of actual substance or depth.

Then there’s really idiotic stuff- like why the hell would the eeeeeevil rich people hire a damn hobo “sleeper agent” to shoot missiles at the spaceships full of noble poor people FROM EARTH INTO SPACE rather than just equip the space station with a defense system? I mean shit, they can afford Bugatti shuttles, why not? Does future Bugatti not make a line of interceptors, for that matter?

How does Matt Damon’s character get that T-shirt on after he gets the exoskeleton put on his body, anyway?

The only redeeming quality of this garbage was Sharlto Copley, the hobo sleeper agent. He was actually really fun, and I liked that he had a couple of South African jerks running mercenary jobs with him. The production design and photography were actually quite outstanding, even though it was kind of dumb that the eeeeeevil rich people space station just looked like Martha’s Vineyard in space.

You will believe that a man can eat a grenade and live. Or maybe you won’t. I didn’t.

Mostly Christmas fare for the kids, Burl Ives by the truckload. I really, really, really wanted to listen to some Curve the other day but somehow Spotify has all of the bad Curve records but none of the good. What does a man have to do to stream “Doppleganger” these days? So I settled on some Lush and early Cocteau Twins and thought a bunch about the 1990s.