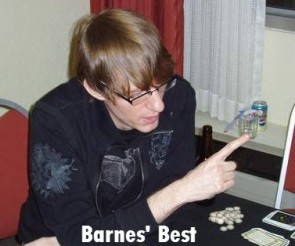 It's time for a reckonin'.

Your 2013 Cracked LCD presentation of Barnes’ Best is right here.

I cheated a little this year because there were three games that were so infinitesimally close that I couldn’t really pick one over the other with any kind of discernible justification. So it’s a Triple Crown this year, which should delight those of you who teased me about throwing GOTY possibilities around. I’ve also kept my five item shortlist, so there’s eight games feted as Barnes’ Best this year.

So that’s that, let me know what you think.

As far as playing games, I just got Archipelago and boy howdy, is it crazy town. If Boelinger went AT over the top with Earth Reborn, Archipelago is definitely his Euro over the top design. I think it may be brilliant. In some ways, its’ a kind of game I’ve been wanting for years- a fairly complex age of exploration thing with natives, development, and moderate detail. The whole thing is so elaborate, I can’t wait to dig into it more.

For reasons I can’t quite explain, I ordered the Warhammer Diskwars thing. I forgot it was a Tom Jolly thing, and I forgot that I actually liked the Star Trek one. I’ve been on kind of an “alternative miniatures” kick lately, so I’m looking forward to trying it out.

Stonemeier games sent over Euphoria, we got a couple of games of it in with the Hellfire Club over the holidays. It’s actually really good. The designer warned me that it’s very Eurogame, it’s a good one and it’s actually kind of surprising how much attention is paid to story, detail, and setting.

I also finally got to play Tomorrow, co-designed and developed by my good friend Bill Abner. It’s _almost_ awesome. It’s just a couple of iffy design decisions away from possibly being a stone AT classic. I’m not quite sure how to describe it, but it plays something like a cross between Nuclear War and Imperial.  The iffy choices tend to be pretty impactful though, so it pulls up the wagon before it crosses the finish line. That said, it’s a ton of fun despite the grim theme.

Battle for Souls is really good, more on that one later.

Mostly playing Lego City Undercover, which is the best Lego game to date.

The kids got Just Dance 2014 from Santa Claus, so that’s on all the time.  Being little kids, they want to do the same songs over and over and over again. Those songs are “Prince Ali” from Aladdin, “Ghostbusters”, and for some bizarre reason “Just a Gigolo”.

The game is really, really, really stupid. I’m not sure that it accurately tracks your movements and the scoring seems to be pretty arbitrary (not sure what “cute” or “creative” mean). But that’s not the point, the point is goofy dancing to mostly bad music. The kids love it, I love playing it with them. Scarlett doesn’t even hold the Wiimote, she just dances nonstop. River on the other hand is hyper competitive. We couldn’t get him to play, and then I said “alright River, if you want to beat me you need to get up and dance”. Then he was in. Whoever’s winning gets this little crown on their avatar, so when we’re playing I have to get the crown, let him win it back, take it back from him, and keep the drama going.

Went back to Brief History of the World, which is really good…also Neuroshima Hex, I got all of the extra armies. I think Dancer is my favorite. I love NH, but I really think that IOS is the only way to play. Not having to work through the resolutions makes the game way more enjoyable.

I got the full Lego Star Wars thing, which is great, but River gets up early and steals my phone, erasing all progress I’ve made every time.

I have loved this book. I actually really like the fantasy stuff- it’s lightweight material, interesting enough given the level of detail. I’ve come to like how a simple, cartoon story unfolds into this big epic. Smith has said that he wanted Bone to be something like a Carl Barks book but allowed to explode into a much, much larger story and I think it mostly succeeds at that.

Not sure what I’m going to tackle next. I want to do another “epic length” run of something.

Tim Burton’s Dark Shadows…I’ve watched it twice, so that’s saying something I guess…but I just don’t know what to make of this thing. It’s a total mess, as could probably be expected from adapting a 1200+ episode TV show into a two hour movie. The tone is all over the place. Traditional gothic horror, goofy comedy, family drama…where is this thing going? And then Alice Cooper shows up.

It is very soapy, which is appropriate…and Depp is really fun, obviously having a good time with the role. The 1970s setting is appealing, and there’s some really great costume/production design work (Coleen Atwood).

But it’s just so scattershot. I dunno, I guess I like it. I never really got into the show, with so many serial episodes it’s really kind of impenetrable at this point.

I’ve been listening to Blood Orange’s Cupid Deluxe. Blood Orange is Devonte Hynes, who used to be in Test Icicles and Lightspeed Confessional, both bands I’ve listened to just a little over the years. But Blood Orange caught my attention because anytime a review hints that something may be “like” Prince in any way, I’ll check it out.

Well, it is “like” Prince in some ways. If Prince were born poor in Brooklyn, maybe struggled with drugs and prostitution, and was generally just more downbeat. It’s a really interesting record…the Pitchfork review stated something to the effect that the drums are reminiscent of “good times long past” and I think that’s exactly right about the atmosphere of the whole album. It’s spare, worn out, “closing time” music in a lot of ways.

“You’re Not Good Enough” and “It is What it Is” are the ones to hear.