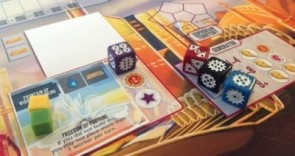 The only game I know of where deflated balloons are a treasure.

Now that we've all had about fifteen minutes to read that front page Steam Park review that Nate worked so hard on...

About 6:45 am on the Saturday morning before Christmas, I was woken up by my wife banging on the window and throwing open the window. She started yelling “Hey! What are you doing? Get out of our yard!” I jumped up and looked out to see this guy waving frantically waving, running to a white van yelling back “it’s OK, UPS, I’m just dropping off a package!”.  Weird, off-hours holiday delivery.

Anyway, in the box was Euphoria, a new title from Stonemeier Games. I had requested a review copy and the proprietor/designer Jamie Stonemeier said “I gotta warn you, it’s definitely a Eurogame”. Which is, of course, totally fine by me as long as it’s a good one. And Euphoria is a good one. It’s a worker placement game, which could spell trouble, but it’s one that has a much higher attention to story and setting and an actual _theme_, and by theme I mean something that the game is actually about. Not just a system of pictures and fluff text.

It’s a neat one, but I do think it’s one that won’t have a lot of longevity. I can’t see busting it out ten years from now. But you know, most games are like that when you get down to it. Review is here.

Warhammer: Diskwars is still going strong. I’ve been playing the crap out of it and I want more. I was going to get a second set but they’ve been sold out everywhere. I hope it does well, I’d like to see this line go on for a while.

Ryan Laukat over at Red Raven sent me a copy of Eight Minute Empires: Legends. This game is REALLY neat. Very minimal DoaM/area control thing driven by an eight round card draft with some simple set collection and special powers. Not really eight minutes though, more like 15-20. But with that said, it’s almost a kind of “superfiller”. It feels more substantial than you’d expect, and it’s worth playing a couple of times in succession. I think this might be a really, really good little game.

Our very own Geoff Englestein sent the new Space Cadets Dice Duel game, which I’m really excited to try out.  We haven’t had a steady turnout for the Hellfire Club recently so I’m worried about that 4-8 player mark, but I think we’ll get a 4-5 player one going this weekend. Looks really fun, and the first game was great. Looking forward to that one.

And adding to the pile as of about ten minutes ago, Portal (Ignacy himself!) shipped me copies of Theseus and Legacy. Both games look awesome- great production. I love that Legacy comes with a faux handwritten letter setting up the story, such a nice little touch. I played a couple of solo games of Theseus last night. It’s very rare to play a game where you just have no idea where the designer is coming from with it. At first, I felt like that- I was thinking “this design is completely out of nowhere”. But then it started to feel kind of familiar and I couldn’t place it. Then I realized that the game is built on Mancala! It seems like it might be really good, more plays needed for sure- it’s about 30 minutes, definitely in the Neuroshima Hex level of tactical complexity/quick resolution.

I got Puppeteer on PSN because it’s marked down to $7 for PS+ members. I don’t know what to make of it yet. The art style and visuals are amazing. The whole game taking place on a stage complete with lighting, rigging, and stage effects is pretty brilliant. The concept is really interesting, and the theatricality of it is very appealing. But the gameplay isn’t very appealing. I was under the impression that it was more of a traditional platformer. It’s somewhere between that and a puzzle platformer. I’m actually not a big fan of puzzle platformers. Worth $7 to check out though, definitely.

Kind of got bored with Don’t Starve. Those kinds of post-Minecraft crafting/survival games don’t really appeal to me for some reason after an hour or two. Sorry PS4, guess you’ll be off until MGS5.

Tired of waiting for Sonic All-Stars Racing Transformed to drop below $15 on Wii U so I got the IOS one. It’s really good, probably the best racing game I’ve played on the platform. It seems like most of the console game is there, with some roster and track omissions. That will almost certainly wind up in DLC. There are a couple of currencies and things you buy, which usually spells trouble, but so far I haven’t been remotely interested in buying more.

Hoplite is OK, if overrated. I got to the 16th floor on my third try and the game locked up with me and would not load again. I don’t know if I want to bother with it again.

Bone is finally complete, and it was awesome. Definitely an epic.  One of the most oddly touching moments was that bit (no spoilers) where Thorn and Bone are in jail and her tooth comes out. If you’ve read it, you know what I’m talking about. That was such a sweet little moment. Decided that I definitely want the color Bone books.

So I’ve moved on now to the Life and Times of Scrooge McDuck, Don Rosa’s Eisner-award winning origin story. I’ve not read any of his Duckville stuff, but so far (four books in), it’s pretty damn good. His attention to detail is RIDICULOUS. Everything in the story maps back to something in the original Carl Barks material. There might be a subplot that came from some off-hand thing that was mentioned somewhere or some little interlude that extrapolates on something from the old stories. And then there’s a layer of historical detail on top of that. Great art, fun stories, classic Uncle Scrooge stuff.

My god, Beasts of the Southern Wild was a great film. The most interesting thing about it to me, other than the fact that it’s a film that dares to say that these people living outside of normal society were barely affected by hurricane Katrina, was that it was very much like a real world Miyazaki film. There were some passages in it that were VERY Miyazaki- simple day-to-day stuff, the perspective, the magic realism, and so forth. I can definitely tell that the filmmakers had seen Princess Mononoke, Kiki, and Totoro in particular.

I also watched Only God Forgives, the latest Nicholas Windig Refn movie. I like all of his films, including this one. But I’m still not sure if this movie is actually terrible, if it’s brilliant, if it’s almost unwatchable, or if it’s the true heir to filmmaking like Lynch or Jodorowsky. It’s no wonder the film sharply divided critics and audiences, because it’s tough going and not just do to the grisly violence. It’s also SUPER formal and rigidly styled, but I like that. There’s a very specific atmosphere about the film- Bangkok, 4am, pink neon, slightly intoxicated. I find myself wanting to go back and watch it again. It’s haunting.

Started watching the Clone Wars cartoon since we’ve got a rash of Star Wars fever sweeping the house- River’s birthday party is Sunday and he demanded a Lego Star Wars theme. The show is actually a lot better than I expected. By making the prequel stuff more kid-focused and unhooking it from the baggage of Star Wars, it comes across much more successfully. It also helps that the voice actors for the prequel characters are WAY BETTER than the actors in the film. It’s looser in general, more fun, and somehow feels more like Star Wars than the prequels did.

Mostly listening to that Power Trip record, which just rules. If you like old school bullet belt thrash, Discharge/Broken Bones, or quality metal at all, here’s your mandate. Manifest Decimation is the name of the record.

I’ve also been listening to Vhol a lot, it’s kind of a “supergroup” of a couple of metal folks from Hammers of Misfortune and elsewhere. It’s definitely black metal, but they’re bringing the old school influences of Judas Priest and Mercyful Fate up front. Fans of classic black metal or proto-black metal acts like Celtic Frost should take a listen to this one. The songs are just killer, every one on the record is memorable and full of suprising arrangements.

Other than diving into black metal again, we’re listening to a ton of Sofia the First songs.