Next of Ken, Volume 80: You Say You Want a Resolution, Well, You Know 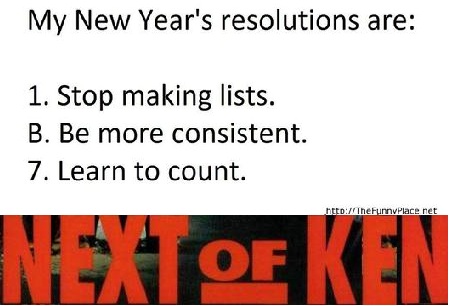 It's not secret my column has been very irregular over the past half of last year. There are a lot of reasons for that; at the start when I could see this was becoming an issue I apologized for it. I'd also hoped I could quickly correct the things holding me back and hop back in the saddle. Though that started off promisingly enough, I was soon enough not pumping out the material regularly.

I've come to the conclusion that instead of fixing the issues that prevent me from doing my column weekly, I'm going to have to simply accept that fact that my column every week is not always going to be an epic, multi-part thing where I talk about a TV show, two games in the pipeline and a full-fledged review.Â  I feel badly about that because I set the precedent when I first 'branded' my weekly contributions with a column title; fact of the matter is, I simply cannot do it that way anymore.

A big part of the problem is that by following this format, I was constantly seeking out review copies of new games.Â  While new games are always well and good, what ended up happening was that I received several games that I would call "okay."Â  There was nothing wrong with them per se, they were solid games, but they didn't always excite me.Â  Shellie even mentioned to me in a private message that she could tell when this was happening just by the style of my writing and what I chose to focus on.

It's funny, because I went with a multi-part column to free me up to talk about more things.Â  What ended up happening though is that it almost felt like it was straight-jacketing me into writing each week a certain way.Â  To fuel that style of writing, I was receiving and requesting a lot of review titles.Â  That became the focus and fuel of my weekly columns, and in some ways I came to resent that.

So what am I going to do to fix this? Â Well, I'm glad you asked.Â  'Tis the season for New Year's Resolutions, so I'm resovling to contributing no less than bi-weekly again.Â  I'd love to go weekly, and I probably will, but I am going to set my sights on an achievable goal and from that point can only be pleased rather than disappointed.

First up, the old column format has got to go.Â  I'm keeping the "Next of Ken" title, but I'm no longer seeking to maintain that strict format.Â  From this point forward, I'm probably only going to have one topic per column.Â  And I'm diversifying what those topics can be.Â  It's a little-known fact that I've turned over a lot of my review contacts to other writers on the site.Â  I've kept a few, and I will still review new games, but from this point forward if I seek out a review titles it's not purely for column fodder but because I truly believe it might be something worth paying attention to.Â  So yes, I will still review games, but I'm now deliberately (and hopefully) seeking games that won't be 'middle of the road' just to have review content. Â Might I be wrong?Â  Sure, I could still misjudge a game.Â  But I will be more purposeful in the games I request and receive for review.

If the column changes, that means no guarantees of length.Â  Some weeks I may still have reams of things to say about something.Â  Some weeks, I'm guessing I'll do well to put together four or five paragraphs about something. Â Formerly, that would embarass me to put out a short column.Â  The argument in my mind is now of course, better a short column than nothing at all, eh?

Backing up to the point about reviews, I'm also pretty sure the column will no longer be purely review-based.Â  Being review-based is just fine when the year of games is good.Â  It's also fine if there are a large number of bad games, as savaging a really bad game is usually pretty fun to read.Â  The problem is when you have what I consider to have been a fairly mediocre year for new games, as 2013 was.Â  There were plenty of "okay to good" stuff, but precious few homeruns, at least for me.

One other thing, I am moving the column to Fridays.Â  Shellie has traditionally been against my doing this in the past because we get fewer hits on Fridays and over the weekend.Â  First, I'm thinking that in this case, content beats no content, any day of the week.Â  Second, San's articles have been so good lately that he deserves an extra day of Front Page support without me meandering in and bumping him down.

So what will I fill my time with?Â  I do have some ideas.Â  I'd like to do 3 or 4 "Ameritrash Hall of Fame" entries this year.Â  (That's the good part about getting off the review treadmill and doing those at my own pace--the freedom to do special columns like that whenever I please.)Â  I'm also pretty keen to go back and look over my gaming collection as well as games I've reviewed in the past and do a "How Do I Feel Now?" for each of them.Â  "Top Games of All Time" is a fairly common well to dig in.Â  I've never done anything of the sort, but at some point I think I might like to.

As for my traditional duties for the site, I'll still put together some Game of the Year voting, most likely in March.Â  In the past two years I really over-complicated the process, and I think we're going back to a straightforward public posting/nomination/discussing on a front page article, with an eventual "Reader's Choice Game of the Year" extravaganza to follow.Â  March seems best as it gives people time to get those year-end games played.Â  It also encourages a lot of public discussion, which I really like.