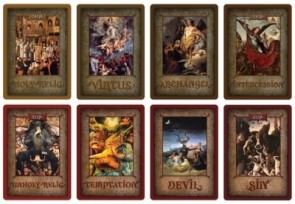 This week, let’s look at Robert Burke’s under-the-radar gem Battle for Souls. It’s another Kickstarter one, but it’s one of the better ones. And get this- it has THE BEST ART I HAVE EVER SEEN IN A BOARD GAME. You can’t go wrong with William Blake and other actual artists. OK, it’s cheating a bit, but the graphic design is quite nice too.

It’s a cool little game that has a neat, very medieval theme- angels and devils vie for control of souls, swaying then with the seven virtues and seven deadly sins. It’s really another Schotten-Totten-derived contested card control game, but it’s one of the better ones I’ve played, at least since Omen.

Mr. Burke told me that several reviewers passed on it because of its quasi-religious theme and the fact that you can play, well, Hell. I told him that was exactly why I wanted to review it.

In case you missed it in the forums, Nate Hayden (Cave Evil) sent me a copy of Mushroom Eaters. It is...really something quite special. But probably not for you. Not to sound elitist, but it’s the kind of game that is definitely not a “general audiences” offering and it has a very specific design goal that is NOT “have a rip-snorting good time”, “shoot the shit with your bros over some die rolls”, “show your friends how smart you are” or “look at these clever mechanics”. It’s an attempt to use game mechanics to simulate the physical, mental and spiritual effects of participating in a shared psychedelic experience, specifically a shamanic mushroom ritual. Aaaaand the dance floor clears.

But it’s the real deal. Nothing else like it in the world. Proof positive that games can carry some very rich, very internal themes that have nothing to do with competition or genre fantasy. A game of rare subtlety, insight, and ingenuity. On the one hand, it’s kind of a shame that Nate isn’t approaching Vlaada levels of superstardom, because this man is doing stuff that NOBODY else is doing- completely fearless. But on the other, the handmade and personal quality of his games so far make them feel very removed from the larger gaming world. And I like that.

Nate also sent the 2nd edition of Cave Evil, which is a must-have obviously, and some fun goodies like a button that says “fuck minis” on it. It’s on my hat.

More Theseus…I’m really liking this game. It’s fairly abstract- if you’re going to spend the entire game bitching about the Mancala rule that makes you move as may spaces as there are tokens in your area, you’re going to miss how cool this design is. Very much in the same “superfiller” weight class as Neuroshima Hex.

We’ve also been playing the shit out of several Lego games. Scarlett is still a little too young for them (but she loves Chicken Cha Cha Cha and Viva Topo), but River is totally into Heroica. I had one of the most profound moments of gaming ever with him the other day. He was fighting a goblin and lost. I said “OK, he bites you and you lose a hit point”. He said “no daddy, he takes me away and locks me up in jail and you have to come get me out”.  He took his piece off and put it in this little dungeon room, completely ignoring the rules and process. I said “alright then, I’ll have to go get that key out of the kitchen so sit tight”. So he effectively created this sub-narrative- totally against the game as written- and we played through it. It was awesome. I wish all games had a moment like that. I guess some parents would have been all like “no, no…the rules…follow the rules”. Screw that. This was more fun.

River is also, strangely, suddenly quite competent with playing Lego Star Wars. I think it’s because he’s been stealing my phone in the early morning and playing the IOS version before I wake up.  Almost overnight, he was suddenly not “playing” the game by running endlessly in to a wall. So we’re playing a level every night. He still needs some help on some bits, but one of the genius things about this game is that it is specifically designed to be NOT punishing if one player isn’t up to speed.  Plus, you can put the control down and walk off and come back five minutes later and your kid isn’t looking at a game over screen, wondering how to start it up again.

I really wish Lego City Undercover had co-op. But I’m thinking we’ll get the Marvel game on Wii U next.

I suddenly got a hankering to play some gamebooks, so I went back through Sorcery! What a great game, so well presented. I took a slightly different route than the last time I played so I felt like I got to see more of the story than before. I bought the second one and imported my character, about to start on it. I also picked up the Judge Dredd one because, well, Judge Dredd.  Might grab a Fighting Fantasy or two if there are any on sale, $4.99 is a little high for these IMO.

Just kind of casually reading Uncle Scrooge, no rush. I absolutely love it. Hopefully Don Rosa will be at Dragon Con next year again, and hopefully I’ll have a book for him to sign.

Finally saw The Secret World of Arrietty. It was good, definitely a few steps up from Ponyo and Tales of Earthsea and more in line with classic Ghibli fare. I liked the story, the characters, and the tone. And of course, the animation and illustration was just to die for. But as a whole, it feels even slower and quieter than most Ghibli films and it comes across as really kind of boring. It’s not an unpleasant kind of boring, but it doesn’t engage like their best work do. But good, and the kids liked it so it’ll probably be on again tonight.

They also liked Despicable Me 2, which I hated. The entire film- like most non-Pixar CGI animated films- seems to be about fat people and wiggling butts. I thought the first one was kind of cute, but this one was just obnoxious.

I watched the Clone Wars movie, which was widely panned. I kind of liked it, actually. Probably more than the prequels. I like the wooden marionette looking character designs (I’m sure that's an intentional nod to Thunderbirds/Captain Scarlet) and the story was kind of fun. The writing was sloppy and it definitely felt like Saturday morning than Saturday matinee, but overall it was decent EU Star Wars. I love some of the mechanical designs. I also watched the first four episodes of the series and was surprised at how much I liked it. It's so much better than the prequels.

They are both OBSESSED with Star Wars right now, if it’s not already apparent. I think River’s favorite part is when the Wampa gets its arm cut off. I told him there were PLENTY more arms to see get cut off before the series is done.

Still wallowing in a quagmire of black metal.  The latest Ruins of Beverast, classic Abigor (“Satanized”, with the classic “Battlestar Abigor” on it), Paysage d’Hiver since it’s winter time, Drudkh, the most recent Xasthur release which is probably his best.