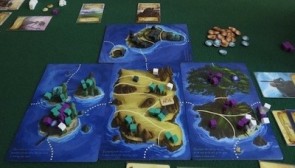 I like minimalism in general. I think there’s a lot to be said for editing out anything excessive or possibly unnecessary and leaving behind only the core, essential elements of an idea. Ryan Laukat’s Eight Minute Empires: Legends is a design that acquits itself pretty well in that regard, it’s a super-streamlined DoaM/area control game with a fantasy conquest theme and just a tiny, tiny touch of 4x if you play with all of the included variations. I liked it quite a lot, and I think it’s a better filler choice than Seven Wonders or some of the other games in the 20-30 minute class. That’s right, it’s not actually eight minutes. But great title, anyway!

More Theseus…I’m finding this game very strangely captivating. It’s not really like anything else out there. Very, very unique design.

Also on the Portal tip- I got in a couple of games of Legacy: The Testament of Duke de Crecy. One solo, one with three. It’s a very, very interesting game. At first I was NOT feeling it, it felt like the usual Eurogame worker placement deal. But then I realized that the game was telling a unique story. It’s about building a family legacy, starting with a matriarch or patriarch. They move about in society, getting close to “friends”. They get married and have kids- or don’t, if there’s complications that happen at random. You can invest in a mansion for your family or get them into public office. Or you can throw lavish balls, contribute to the community, or start businesses. The game moves in generations, so when you get to the next generation, the kids grow up, get married (or have marriages arranged for them), and have kids. The goal is to have the most prestigious family in four generations.

There are TONS of bonuses, combos, and other benefits in the friend cards. You can match up nationalities or professions for certain effects. You can shame your family by begging others for money, which causes you to lose friend cards. You can hire a fertility doctor if you’re behind on having kids and have TWO…but everybody finds out and you lose some prestige.

Very neat stuff, I’m not sure if it’s something I’m going to want to play for the rest of my life, but it’s a really cool design. The neatest thing is that you actually create a visual family tree as you play.

Not on the consoles, but the laptop. Hearthstone. HOLY CRAP, IT’S REALLY GOOD. When I heard Blizzard was doing a free-to-play card game, I kind of groaned because we know how that usually goes. But somehow I neglected to credit that it was Blizzard, which means extreme levels of polish, smart design and that X-factor that makes their games really appealing in a timeless way. It totally feels like a Blizzard game. And you know, you really don’t have to spend money- at least not at the levels of play I’ve seen so far.

It’s a very simple CCG with some brilliant reductions. The mana curve is automatic, you get one every turn- you don’t ever get mana screwed. Minions can always attack the caster _unless_ there are minions with the “taunt” ability, creating some really interesting (and nasty) strategic situations. The cards are fun with some great combos and synergies out there.

I’m totally loving it, I think it’s probably the best digital CCG I’ve seen so far. I think it could be quite impactful, I could see it becoming a HUGE hit. It’s very accessible, even without spending a dollar on better cards. I really like the trading solution- you can “grind” cards you don’t want to make dust, and then use the dust to buy any card you want in the game- provided you grind enough cards to get them. Very smart, and it makes it truly free-to-play as long as you’re patient. I bought four packs of cards ($6) really more out of curiosity than necessity. Got some cool stuff, but I may grind ‘em out to get the cards I really want.

I am completely obsessed with gamebooks right now. I’ve dallied with them in the past, but for some reason I am totally into them. I think it’s because I’ve been hankering to do some light roleplaying, and these slake that thirst. Sorcery! 2 is the main one I’ve been playing, and quite frankly I think it’s going to be impossible to top. It’s so, so well done. It plays like a big, epic RPG with paragraphs. The only complaint I have is that I kind of feel like it’s almost TOO long.

The other one I’m working through right now is Blood of the Zombies, one of the more recent Fighting Fantasy books written by Ian Livingstone.  I bought this one solely because of our very own Matt Thrower’s review back in 2012. Normally, I would have passed on it since it’s a zombie thing and I’m tired of zombies. But wow, this one is a lot of fun. It’s extremely lurid, pulpy, and 1980s. So instead of it being this po-faced thing about how humans are terrible to each other even in the face of the zombie apocalypse, it’s about running around a mysterious, mad scientist castle and getting attacked by zombie apes. The writing isn’t high literature, but it’s fun and revels in its trashiness.

Pretty hard too, I think I’m close to the end but I keep getting overwhelmed.

I’ve got the Judge Dredd one coming up next. Then probably Forest of Doom and I’ll try one of Tin Man’s Gamebook Adventure titles.

We’re watching Star Wars films almost non-stop here. Which is OK by me.

I still think that people that hate on Return of the Jedi are stupid. There’s so many awesome scenes and characters in it, including the Ewoks who are completely awesome. The Ewoks are so widely hated because they remind fat 35 year old losers that Star Wars is kids’ stuff. I love that they’re little bear people, and little savage bear people at that. They look just like my dogs.

I think this one has become River and Scarlett’s favorite…they’re always asking for “the one with the brown monster”, referring to the Rancor. I think that scene made a big impression on both of them in the way that scenes like that sometimes do with kids.

I’ll probably listen to the Daft Punk record a couple of times this week. The Grammy-winning Daft Punk record. I did actually see the performance, which was pretty awesome. At first I thought “I dunno, Stevie doesn’t seem to be keeping up.” But he did, and it was great to see him up there with Nile Rodgers and the robots.

Weirdest Grammy moment- Paul McCartney on stage with Pat Smear.  I bet Pat Smear NEVER thought he’d be on stage with one of the Beatles back when he was in the Germs.