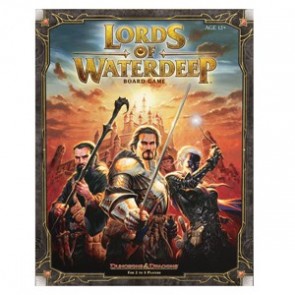 Game Name
Lords of Waterdeep
There Will Be Games

At a pre-Christmas gathering, I ended up chatting to a friend about worker placement games, as you do. He’d enjoyed a lot of Puerto Rico and Agricola with his family but, it transpired, he’d never played Lords of Waterdeep, which I’d been playing loads of on the iPad.

So the next time I visited, I took it round, Skullport and all. We threw in both expansions and played a six-player game. It turned out to be quite a ride: I drew a lord card that got a bonus for each building owned and focused on that instead of quests. As a result I lagged way behind the leader for the whole game, was able to deflect attention away from myself when take-that opportunities came up and then got a truly massive end-game bonus that tied me for the win, only to lose the tiebreaker.

But what repeated exposure to this, my most-played worker placement game has convinced me of that is worker placement games are fundamentally not as exciting as they should be. The game state just isn’t fluid enough, and there’s not enough interaction. Sometimes, you’ll take a turn and wait in tense anticipation to see if someone grabs a space you need before you. Sometimes you’ll artifice a delightfully creative plan to work around the game and steal a boost over your opponents. Sometimes, but just not often enough.

It doesn’t matter how many “gotcha” cards, or how many on-board variables you throw into the mix. Lords of Waterdeep integrates both with great skill and gleeful abandon. It’s just struggling manfully against the drab, weighted straitjacket forced on it by the fundamental mechanics. Sad that I’ve ended up in a hobby where these things are celebrated as the pinnacle of entertainment.