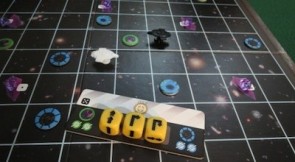 No, really...that is the USS Defiant. Both of them.

You might know Geoff Englestein as one of our resident F:ATtie game designers. He did a very underrated game called The Ares Project a few years ago and he had a big, well deserved success with Space Cadets. He’s back this time with Space Cadets: Dice Duel.  Think Star Fleet Battles but instead of filling out forms to distribute energy you have an Engineering Officer roll dice and then use them to activate stations and then the people in those stations use dice to do their assigned tasks. Oh, but in real time while another ship with a live crew is trying to blow you up.

It’s more than a little silly and a lot raucous- with the right crowd. It’s a HIGHLY social game that really depends on the people to sort of cover up the fact that it’s running on a fairly repetitive chassis with not a whole lot of strategy involved. Which is totally fine, because the game really emerges when your team is frantically rolling dice while another is. Anyone who says that it’s just rolling a D6 over and over again is full of shit. there’s a time pressure that isn’t apparent in the rules that can make the game tense and exciting.

I like it, but it really needs eight players. All of whom are totally onboard with the concept and the light roleplaying it requires. Reviewed here, and thanks to Geoff for sending it!

I’ve been digging into Mage Knight solo lately…every time I go back to it, I’m always like “GOD DAMN this is a good game”. I never really feel like I have a total grasp on everything I can do and all the strategies I can pursue. Which is good, because the game still has a very “frontier” feeling to it. I know some folks don’t like the ‘puzzle’ aspect of it, but I actually find that a lot more compelling than if it were a “flip a card, roll a die” thing. Pathfinder is great for that. But Mage Knight is more challenging…working out the IF you can do something is always interesting and reacting to what you explore, what the game spawns, and what is on offer in terms of upgrades is plenty of randomness and variety. I actually still haven’t played with General Volkare yet, think I might try that tonight.

Played an epic game of Star Wars LCG the other day with a buddy…I built two very Hoth-y decks so there were lots of interactions with that keyword. I played the Rebels and went to town with the Snowspeeders and Rogue Two, which gets bonus blast damage for having more Snowspeeders. He brought an AT-AT and Snowtrooper, which was bad news because of their high damage and shields. He pulled way ahead in the Force struggle by committing Darth Vader. We both had two objectives and the Death Star dial was on 10 so it was a do or die thing. I managed to pull of the win in a last-ditch edge battle where it was literally all in or nothing for both sides. But I won it by one, got the edge, and finished off the last objective. Great game, still need to get the new expansion.

Mostly playing Bravely Default, and it’s really good. Very 1990s JRPG but with modern sensibilities- like auto combat and the ability to (unwisely) turn off random encounters altogether. It’s very much in the Final Fantasy mode, but with a more comprehensible story. It has the jobs mechanic from FFT.

Threes, the new puzzler everyone is excited about, is bullshit. It’s really well designed, has a cool mechanic, and there’s definitely a challenge. But the problem is that there’s no way to consistently do well with it because of how the new tiles appear. I beat Jeb and got a score something into the high 3000s, but I can’t do that consistently at all. I almost feel like high scores are more the result of the number of games you play than performing exceptionally well on one. I was really into it for two days, now I’m ready to delete it and move on.

I’m reading the Batman/Judge Dredd crossover books, written by Wagner and Grant and with a couple of different artists including Bisley and Fabry. They’re about as tacky and ridiculous as you’d expect. The first one, “Judgment on Gotham”, is definitely the best so far. Judge Death shows up in Gotham, hangs out with the Scarecrow, and winds up on stage with a metal band singing a cover of “Sympathy for the Devil” with lyrics about himself. Batman goes to Mega City One and tangles with Dredd, who arrests him and confiscates his utility belt. Anderson breaks him out so they can go stop Death from killing everybody in Gotham. Ridiculousness ensues.

You can tell the writers were completely aware that having Batman and Judge Dredd team up is a terrible idea so they just kind of have fun with it. They’re a fun read, but definitely not essential.

I’m also reading “Apocalypse War” which is probably the best Dredd story of all. It’s so freakin’ cool, so 1980s in the best possible ways. Favorite panel- another Judge starts freaking out because the Sovs’ “total nuke out” has killed 150 million people. Dredd punches him in the phase saying “prone to hysteria, the academy should have picked it out”.

Before Atlanta became literally frozen, we got to see Frozen. I absolutely loved it and I think it’s the best Disney film since Beauty and the Beast and I actually probably like it better than that. It’s almost plays like a satire of the whole princess mentality with a couple of songs that are so wilfully naïve and doe-eyed that they couldn’t be anything other than parody. “True love” is revealed to be a fraud and real true love turns out to be familial instead of romantic.  The main plot device involving the ice queen Elsa could very well be an origin story for the “evil sorceress” archetype, but it turns out that she really just wanted to be left alone to be herself- and she doesn’t even end up with a man at the end.  Doesn’t need one!

I was worried about Olaf, the comic snowman character…but it turns out that he was actually awesome and very funny. He’s got a song in there about summertime that just had me rolling.

I had read a couple of reviews that stated that there weren’t memorable songs in it, to which I have to say that someone’s standards of “memorable” must be astronomically high. Every song in the film is great. The opening with the traditional Sami song cutting into the icebreakers’ number is awesome.  “Do You Want to Build a Snowman” is touching and sad. Anna’s songs are fun and as stated, slyly satirical. And if “Let it Go” isn’t a balls-out showstopper than I don’t know what is. That’s the kind of song that will drive thousands of young girls into chorus and onto musical theater stages. It will be heard in countless figure skating routines. It’s that kind of thing. The funny thing to me about the song, which I think will definitely win the Oscar, is that it almost errs on the side of Bonnie Tyler/Jim Steinman camp…but that’s what makes it good, it’s overblown and over the top pop-Broadway at its best.

Loved it, loved it. Kids did too.

Still obsessed with Clone Wars, halfway through season two. The second season is definitely darker and more adult in tone, but not in an off-putting way. I can not recommend this show enough. It has become one of my favorite shows ever, and I think it’s the “real Star Wars” that the prequels missed. I figured out why that is last night. Unlike the prequels, this show is made by people that love Star Wars and totally get it. To that end, it’s WAY more successful in being a modern sci-fi serial than the prequels were.

Some really awesome stuff, I’m telling you. Check out the episode “Hostage Crisis”, written by Paul Dini. It’s Cad Bane’s introduction, and he’s a TOTAL bad ass in a way that Boba Fett never was. Season 2 has a storyline involving the second invasion of Geonosis by the Republic and not only does it put the very, very cool Luminara Undili and Bariss Offee in major roles but it also pulls off a surprisingly effective HORROR story that references Aliens quite directly. There are also zombie Geonosians and brain worms. One of the best episodes has been “The Deserter”, where the hunt for General Grevious leads to this farming planet…and Rex (a clone commander) gets injured. He gets taken in at a farmhouse where the head of the family is a clone that deserted the army. VERY cool stuff. Like any series, there are a couple of clunkers- one with Ahsoka’s lightsaber getting stolen is pretty dull, as is another with some political/romantic intrigue involving Padme.

Right now I’m getting into the Mandalorian stuff, which so far is…surprise…awesome. Death Watch, Pre Viszla and his darksaber, Obi-Wan’s funny (and VERY Star Warsy) relationship with Satine…god, I love this show. Even if it weren’t Star Wars, it would rule.

Anyway, it looks like my buying all of the blu-rays was the cosmic trigger for Netflix to pick up the show. You can thank me for that later. They’re going to have them all- including the never-aired sixth season- the first week of March.

My kids want to listen to Frozen all the time and when they’re not listening to that, we’ve usually got Kraftwerk on.

I have continued my Cure review…”Pornography” continues to baffle me, because nothing on the record is as awesome as “A Hundred Years” or “Hanging Garden”.  “The Top” is almost kind of the forgotten great Cure record, I really like that one a lot. “The Head on the Door” is pretty great too…but you can definitely hear that darker, more psychedelic sound being refined into something more pop oriented…”Inbetween Days” and “Close to Me”, obviously. But the Cure at this point are still pretty great overall with some fantastic non-LP singles from this time too (“Let’s Go to Bed”, “Charlotte Sometimes”, “The Walk”). Next up is “Kiss Me Kiss Me Kiss Me”…a record I have NEVER enjoyed apart from “Just Like Heaven” which is…well, just one of those songs that everybody likes anyway.