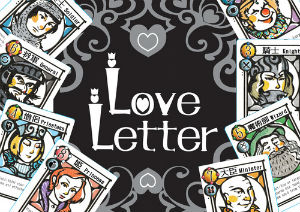 Amongst my international journalism whoring, I contribute occasionally to the magazine Casual Game Revolution.

They recently asked me to contribute an article on "microgames", small short games that seem to have beome popular in the wake of Love Letter. The finished piece includes a short interview with the designer of that game, Seiji Kanai, as well as coverage of Love Letter, Agent Hunter and Romans Go Home, so you might want to hunt down the upcoming issue if you're interested.

After playing a number of small games for the piece - no arduous task since they're often ten to twenty minute games including teaching and setup - I was struck by the fact that although they're very diverse, they have a number of mechanical similarities. Namely, there are usually strong elements of luck, bluff and memory.

One of the most notable characteristics of Love Letter itself is that it strikes a superb balance between these three things: indeed I’m pretty sure that’s what makes it so much fun and why it’s become so popular. But what’s notable about bluff and memory is that they’re things that require skill and effort on the part of the player but virtually no rules overhead to put into a game. And of course putting in a decent slab of luck is a streamlined way of injecting some tension and uncertainty.

You want much in the way of spatial strategy or resource management then you’ve got to put in mechanics to deal with that, and components too. Older “microgames”, like the metagaming series, look positively bulky compared to their modern counterparts, but it’s hardly surprising given the way games generally have slimmed down over the intervening years.

What I’m not sure about is whether this micro-trinity of luck, bluff and memory is enough to make the genre more than a flash in the pan. It can only support so many games before it starts to wear thin. Much as I’d like to have more short, satisfying, portable games around I’m not sure there’s really going to be anything long term that can beat a deck of playing cards.