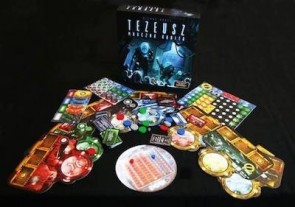 The race for GOTY begins here, folks. Theseus: The Dark Orbit. This game RULES. It takes a few games for its genius to settle in, but once it does, I think you’ve got something on par with Neuroshima Hex. This is a brilliant design, and I guarantee you that you don’t own anything else like it in your collection. Now, how many time do we get to say something like that anymore?

Don’t listen to crybabies who think that it is “random” with more than two. It’s GREAT multiplayer- brawly and constantly changing. The replayability is unusually high- your faction only gets 12 of its 25 cards, so your strategies have to adapt over the course of each game.

I freaking love this game. I waited a while to review it because it’s one of the rare games that I feel like I needed to get a lot of games in before committing. It’s such a singular design I felt it deserved more attention.

Anyway, review here. Special thanks to none other than Ignacy himself who sent me the review copies of this and Legacy.

I threw in the towel on Bravely Default. It’s  a great JRPG, but after 20 hours I just completely lost interest in the story and in seeing the upgrades through to the end. Our very own Bullwinkle is now the proud owner of my copy, long may it prosper.

Gotten back into Super Mario 3D World, good god that game is just so freaking good.

River and I picked up Lego Marvel, and so far it’s about what you’d expect- which is to say that it’s really good, simple fun. It appears that every Marvel character of all time is in the game. River has a little trouble with some of the more complex controls, but I love that I can just drop him out and have his character catch up. Wii U is GREAT again for this, instead of split screen one player can just play completely on the gamepad.

I love everything about Calculords except for the math. My god, that game makes my brains bleed. No, I can’t do simple addition and subtraction.

On Legomancer’s advise, I picked up Pawn’d….it’s a really good match 3 where you have pieces that make Chess moves. Very tricky, very challenging. I like the variety of game modes.

I’ve had the flu all week (don’t touch me), Sunday night I had a 104 degree fever like all night long. So I did something unusual, I binge-watched a TV show. True Detective.

I wasn’t interested in it, but I read that the writer hailed Thomas Ligotti and Alan Moore as inspirations.

For the most part, believe the hype. It’s a bracingly grim crime show with some unbelievably good acting from Woody Harrelson (!) and Matthew McConaghey (!!!). And in case you haven’t heard, there is a very subtle hint of the Lovecraftian.

Let me qualify that. If you are expecting anything to do with Arkham Horror- BUZZZZZ, wrong. No trashbag monsters BEYOND IMAGINATION or anything like that. But the set up is really a lot like a Call of Cthulhu story- investigators check out a grisly occult murder and find possible evidence of cult activity. I won’t spoil it if you haven’t heard, but there is one Mythos-related book that is specifically referenced and there is a Great Old One directly addressed by his “popular” name.

The catch is that if there is anything supernatural in the show, it’s EXTREMELY subtle almost to the point of not really being anywhere except in the viewer’s mind. The result of this is that instead of making the glowing, tentacle trashbag monster mistake, the show suggests that MAYBE there is an unseen, unknowable force not necessarily behind the show’s central killing…but the way that every person is acting. A spirit of discord, sadism and suffering.  A cosmic force that is at the root of what is going on. And there may or may not be human acolytes in service of it. Whether they know it or not.

If you haven’t seen the show, you’re probably thinking WTF. If you have seen it, I think you’ll get where I’m coming from. It’s the right way to do Lovecraftian horror. The real power of Lovecraft is dread, not sloppy monsters.

McConaghey’s character is one of the best written I’ve seen on TV. He’s ruthlessly nihilistic, hollow and full of secrets that when they are revealed, they’re usually horrifying. But in the show’s timeline, the Rustin Cohle of 1995 seems like a very different character  than the Rustin Cohle of 2012. Why? Who knows. He’s an enigma, and watching him is fascinating. He has some extraordinary dialogue.

The Alan Moore stuff is pretty obvious to anyone that has read From Hell, Watchmen or any of his Mythos stuff. Cohle is more or less Rorschach to a T. The interrogation of the character is very similar to Rorschach’s, right down to his long-winded pessimistic sermons about human nature. The From Hell parallels are particularly strong as well, dealing with occult murder and possible conspiracy as it were.

The show does get lost in some asinine who’s-screwing-who soap opera bullshit. Personal lives crap that arguably does develop the characters further, but at the cost of distracting away from the more fascinating plot points. The show also does that modern thing where something cryptic without context is shown for the audience to speculate on around the watercooler. The end of the fourth episode has been widely celebrated because it’s like a ten minute long action scene shot in one take…it is a great long take that is definitely up there with some of Scorcese’s  best, but the whole time I was thinking “what about the girl with the antlers?”

Anyway, the show is definitely worth watching- it’s very high end TV and will justifiably win every award they give next year.

I’ve never not been a Sly and the Family Stone fan- I think they’re definitely best-in-class- but I had never listened to “There’s a Riot Goin’ On”. What a mistake, because after listening to it in my flu-sickened state all week I think it’s one of the best records ever made.

Of course, I knew the singles- “Luv n’ Haight”, “Runnin’ Away”, the deceptively upbeat “(You Caught me) Smiln’” and the stunning “Family Affair”, which is the first single ever to employ a drum machine. But I hadn’t heard them with the album tracks and in the context of an album.

Now, undoubtedly when you hear mention of the band you think of “Higher” at Woodstock, “Everyday People”, and “Dance to the Music”- bright, multicultural, all-access funk-pop with psychedelic rock influences. You think of positivity and light. And probably that crazy fringed jacket. But this record is Sly Stone after all the drugs, all the touring, and all the money’s run out. It’s right after MLK, RFK and Kent State. The Summer of Love lost to escalation in Vietnam. And here’s Sly, crashed out on a fucking BED in Winnebago studio, singing this stuff through cupped hands instead of using vocal effects. He’s making the record practically by himself, which makes the “Family Stone” part of the band name take on a different meaning as Larry Graham and some of his past associates stop in, record some parts, and then have their parts mixed out. It’s almost like the “family” are people drifting in and out of his life, which has become increasingly marred by paranoia and associations with criminal elements, and all the while the Black Panthers are .pressuring him to do more poliltical music

So the record that he produces, after years of not having an album for sale much to the chagrin of the label, is this murky, muddy and completely heroin-drenched thing that definitely isn’t “pop”. It documents the successful rockstar/artist at a complete impasse. The good times are over, but he’s still struggling for something new- which is why he bought one of the first drum machines, and which is why the songs here are fractured, lurching and sometimes tentative.

There is definitely funk. Hard, deep funk. Check out “Africa Talks to You” and “Poet”- all percussive bass and prickly guitars. This shit is totally wired though- tough but incredibly brittle, dark but looking for something light out of it all. It’s remote, lost. Listen to “Just Like a Baby”…the song could be a slow jam, but its atmosphere isn’t romantic. It’s a kind of 4 o’clock in the morning desperation that you’re too wasted to really express.

The whole record swamps and surges along. The sound distorts. Fills come from out of nowhere and disappear, almost like they’re haunting the song. It’s RAW. It’s HONEST.

Putting this record into context, it came out in ’71, along with Funkadelic’s “Maggot Brain” and Mayfield’s “Superfly”- I think this record tops both of them. Sly intended for the record to be answer to Marvin Gaye’s “What’s Goin’ On” (a riot goin’ on, duh) and as a counterpoint to that record’s winsome observations and quite rage about the world outside and within, this album is almost completely insular and if not pessimistic, it’s at least resigned to things falling apart.

Anyway, if you haven’t heard it and have any interest in R&B/soul/funk- this is definitely one up there with the absolute best. You can definitely hear where Prince was nicking some of this stuff and it’s not hard to imagine the early postpunk/funk crowd taking

Discuss this article
Log in to comment
Posts in discussion: Barnestorming- Theseus: The Dark Orbit in Review, True Detective, Sly & The Family Stone