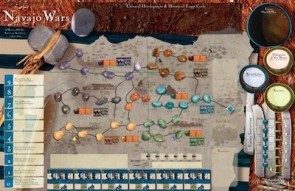 I named Joel Toppen’s Navajo Wars as one of the best games of 2013, so let’s make it official with an actual review. This is a sometimes amazing game slowed down only because it is tremendously complicated and getting to any degree of proficiency with it is going to require a level of commitment that most people will never approach. The good news is that it’s a solitaire game (with a  sort of tacked-on two player co-op option), so you can take your sweet time with it. And you’ll need it, because it requires some hunkering down to get into. Once you’re invested in it, it plays like nothing else and features some really wonderful moments. Mark my words- you will see the AI system used in other games.

Thanks to a trade with our very own Madwookiee, I rustled a copy of Epic Duels. I actually haven’t played it since 2005. But that was back at Atlanta Game Factory, and I had a big stack of these games that I bought at K-Mart for $5 a piece and sold for $50-$80 each. What a freaking fun game, I forgot how easy to play, obnoxious and bad ass the game is. A friend of mine and I did a little two-on-two, I had Han and Chewie with Yoda and a couple of Clones. He had Maul and his battle droid retinue with Boba Fett and Greedo. Maul got shot to pieces (Bowcaster, ouch) because his defense cards suck, but Boba hunted down Yoda and just wasted him with detonators and some timely shots. Han and Chewie both survived the melee. Did second round with Obi-Wan versus Vader, Obi-Wan destroyed Vader, just totally danced around and smashed him. Love it, so glad to have this back on the shelf.

I also got in a round of Talisman this week using both the Firelands and the Nether Realm POD expansions. And everything else but the Dragon.  I had the Dervish and my pal had the Magus. Magus dillied around in the City for a while, I sent the werewolf after him. I went for the Highlands, mainly because I haven’t really played with it much. Got my ass kicked straight through it, pretty much. Magus went through the Dungeon and flopped the boss fight even though he had a couple of those items that give you +2 craft or strength. I wound up getting a Talisman through a stupid Warlock quest (“bring me a fate!”, “OK, I have five.”) I made it to the crown and won. The endgame we played was The Hunt, which lets you draw from the Nether Realm deck at your leisure instead of the regular adventure deck (which is like 800 cards now or something). Goal is to get to the Crown with four Nether cards. Thing is the Nether cards are NASTY. 12 craft/strength on a lot of those bastards.

Didn’t really see much of the terrain cards, a couple of items did get burned up though and we saw some of the Ifrit powers. Overall, both expansions from what we saw added some fun new stuff. More Talisman is always welcome. I realized last night that the FFG edition has, at this point, NINE expansions.

Back into Diablo III…all of the talk of the new PC patch put me back in mind of it, so I fired up my Monk character…hard, master II. DAMN. Brutal. But I’m holding out, enjoying the challenge tremendously. Such a great game.

Got really into the Room this week, finished the first game. Very old school, reminds me of the 7th Guest and/or Myst. The puzzles really aren’t that hard, but they’re interesting and pleasant. Sometimes you just into a groove and know just what to do at every turn.

Card City Nights is a pretty neat 99 cent card battler with no IAPs. It works on a 3x3 grid, you line up arrows on cards to activate them to do damage. It has a cartoon art style that’s actually pretty refreshing in this genre.

The Hutts in Clone Wars crack me up, especially Ziro and his mama. I mean shit, they made Sy Snootles a main character in an episode and we got to see more of Nal Hutta than ever before.

I just watched the Savage Opress storyline which leads, obviously, into the return of Darth Maul. It was really good, lots of interesting material about the Nightsisters and Dathomir. Savage Opress is a pretty bad ass villain, despite his ridiculous “Evil Badguy” name. But yeah, it’s pronounced “Sah-vahj” FYI.

Great piece of dialogue- Padme says something like “millions of clones are dying to fight this war”. Other Senator says “that is exactly why we created them.” “but they’re humans too!” It’s an interesting dynamic, this colossal war with literally millions of combatants…one side has battle droids, the other clones. Both are regarded as completely expendable. But then you’ve got Jedi generals overseeing the whole thing. It’s this massive war without any kind of actual accountability or sense of responsibility, all orchestrated of course by Sidious.

I think this is hitting Netflix this weekend. Protip- DO NOT base your judgment of the show on the movie. The movie isn’t very good. But the series just takes off and doesn’t let up, smoothing out the rough edges of the movie.

Watched The Act of Killing, the documentary about these gangsters that killed almost a million Communists in state-sponsored purges in Indonesia. The filmmakers basically get these two guys to make films however they want about what they did. It was pretty interesting overall, but there’s kind of a weird moral issue about it. The Indonesians still kind of don’t really think that this was an atrocity. There are a couple of spots where the guilt these men harbor shows through (the ending in particular is just wrenching), but these people really need to be punished- not put on the screen.

Checked out another documentary on the ol’ “red flix” as River and Scarlett call it, Cropsey. It’s about an urban legend around New York and Staten Island about a boogeyman-like child snatcher. Turns out that there were actually some child abductions that wound up getting pinned on this weirdo drifter. It’s not really all that great, but it is interesting and it was one of those serendipity moments where it dovetailed right into something else I’m interested in now- True Detective.

You see, there were certain allegations that this weirdo drifter was involved in or accessory to a Satanic cult that was kidnapping children in the area. The documentarians interview one of the police investigators that was in charge of the area and on this case and they ask him point blank if any of the known cults in the area were known to kidnap and sacrifice children. He had been completely jovial and accommodating to that point and then he says very sternly “I’d prefer to not answer that”. YIKES! It’s just like True Detective!

I’ve been meaning to check out some of the stuff on the Sacred Bones label (Zola Jesus is probably their biggest name) and man alive, was I surprised. Where the hell was this label in the mid/late 1990s when I was completely lost to death rock. I didn’t realize that a lot of what these people are putting out was total death rock- not necessarily goth as most people understand it in a post-Sisters of Mercy world, but very early-sounding postpunk in the vein of Southern Death Cult, Play Dead, Red Lorry Yellow Lorry, UK Decay, Ausgang, 1919, et. al. Cult of Youth (probably the best so far) sounds like the first Death in June records quite explictly, offering stridently martial dark folk but without the discomfort of possible (?) fascism. The Hunt would have totally been on Situation Two back in 1981. Anasazi as well. Slug Guts brings some swampy, Birthday Party-like ruckus and Lust for Youth is more creepy synth stuff. Gary War is billed as synthpop, but sounds more like Chrome. Pop. 1280 is doing some really good material that has that scratchy, tribal sound that frankly I thought would never in a million years come back. The label also just released a new compilation called “Killed by Deathrock” that catalogs some EXTREMELY obscure death rock material from the early 1980s. Not to sound like an arrogant jackass, but when I haven’t heard of ANY band on this comp, you know this shit is supremely esoteric.

So yeah, this shit is GOOD, I’m just stunned that there’s people actually making this kind of music these days. Back when I was totally into deathrock, this particular sound was completely DEAD because goth had been completely taken over by legions of Sisters sound-alikes, cheesedick vampire acts and boring ass electro like Wumpscut. I always wanted there to be more bands like the original Christian Death, 45 Grave, all of this UK Batcave era stuff. Here they are, 20 (and 30) years post facto. The new death rock.