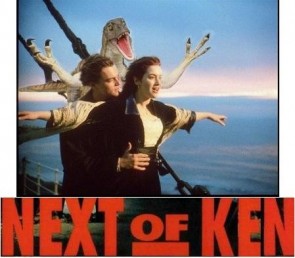 Hello again, putting the time in timely, it's Next of Ken. This week, I'm talking remembering "fun" with DC Deckbuilding Game and Pacific Rim, dabbling in some Firefly: The Game, and reviewing SOS Titanic. Join us, won't you?

My hang-ups on it originally were mostly tied to the derivative nature of the gameplay--face it, this is deckbuilding stripped down mostly to its bare essence. That framework doesn't appear to leave much room for thematic flourishes. 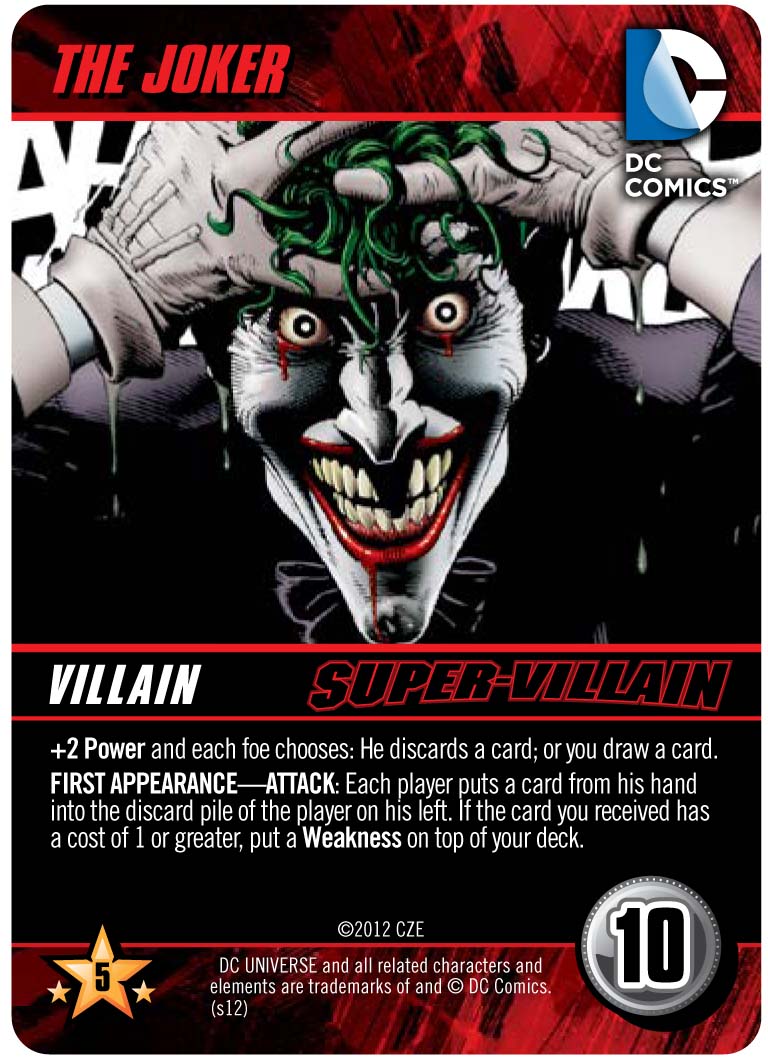 And yet? There are little touches that do manage to frost a little theme on there. Things like Batman being encouraged to rely on lots of gadgets--and to get the Robin card, which can fetch equipment from the discard pile to use again. Superman wants to collect not only Super Power cards but lots of different ones, which is fitting for him.

I've wrestled a lot over the past several months with "game snobbery." It's something that's sort of become systemic and entrenched among the hardcore gamers. It's easy to become 'theme Nazis', to demand innovation and increasing complexity with every game. I'm becoming gradually convinced that while we should expect innovation periodically, it shouldn't be absolutely necessary to just sit down and have fun.

I think at some point in the process of becoming a board game writer and critic, I lost some of that. Part of that of course is just getting older, but worse is the trend to become that "jaded internet fan" that bleeds all over every message board of every web site, ever.

I saw parallels to this feeling when I sat down to watch Pacific Rim with my 10 year-old son last week. I watched Pacific Rim in the theater with my brother. I enjoyed it as harmless, pretty popcorn fun but in my mind I'd already picked apart the corny dialogue, the paper-thin characters, and the distractions with the scenes in Hong Kong (though Ron Perlman is as always a blast.)

Yet when we watched it at home, my 10-year old sat wide-eyed, devouring the whole movie. Cheering at the cool parts. Getting involved in the emotional scenes. Being 10, he didn't let all the other crap cloud his enjoyment about a movie about GIANT ROBOTS PUNCHING EACH OTHER.

When it was done, he said to me, "That was the best giant robot movie I've ever seen." Sometimes, fun is fun. And I'm becoming more and more comfortable with that fact, but I'm still working on it.

Firefly: The Game - Late to the party, I was finally able to play a bit of Firefly: The Board Game. If I had to describe it, it's Pick-up-and-deliver mixed with adventure cards. You get missions to deliver goods, or passengers, or travel on the shady side of the 'Verse by smuggling Contraband or harboring 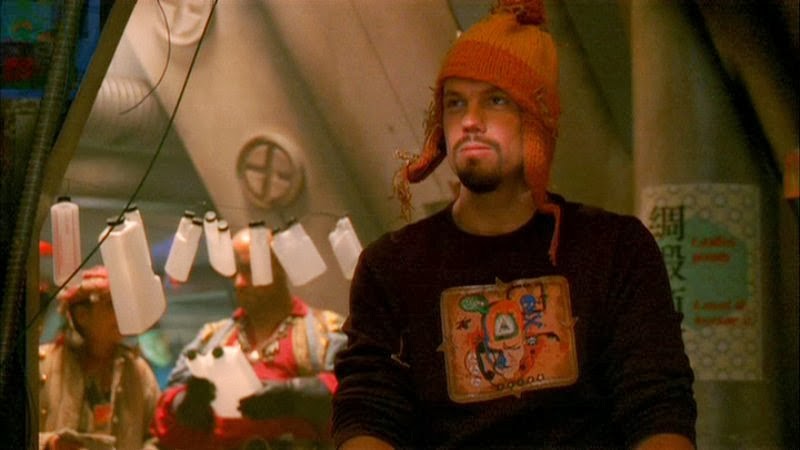 fugitives. As you fly from place to place, you'll flip cards from adventure decks based on what part of space you're in. Most of the time, it's quiet sailing but then you'll run smack into Alliance patrols or worse, flesh-devouring Reavers. The game has several story cards and you'll need to accomplish tasks in order to win the game. Many of them require cash, hence the need to take these down n' dirty jobs.

We unfortunately made some rules mistakes when we played and the game had been running long so we did not finish. Part of that is I disregarded a friend of mine's advice and played it with four the very first game. I liked a lot about the game though it did seem very grindy. Part of that was due to the rules error we made where Moral crew became disgruntled doing Illegal jobs instead of Immoral jobs...yeah, I know. Wasn't me teaching the game this time, though I have made a rules error or three in my day. Or a hundred. Or probably more.

I've thought about the next time running this with just two. Since the interaction is lower anyway that might be fine. I get the feeling though that three is the sweet spot. I'm eager to play it again. Gale Force 9 has this and Spartacus on their resumes, they're doing a good job so far in coming up with licensed games that aren't cash grab phone-it-in style. I like that a lot.

I think the most shocked I have been as of late by a game is SOS Titanic. If you'd had someone tell you, "Well, listen. I've taken the ol' Klondike/Patience Solitaire game. And I've themed it up to be about the Titanic!" You'd smack them in the face with whatever was handy and move on.

I'm going to be honest, I didn't believe it could work. But after sitting down to play it, I'm amazed at how well designers Bruno Cathala and Ludovic Maublanc were able to integrate theme into that old favorite time-waster. 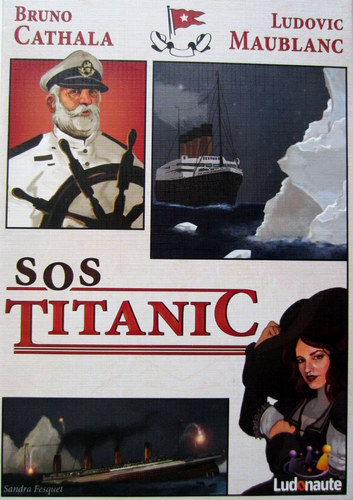 The cards represent passengers, and in the game's niftiest bit your rows are determined by an accompanying flip book that shows the Titanic at different stages of sinking. With each entire pass through the deck, or any time you flip passenger cards and fail, you flip to the next page. At certain points a row will be submerged under water, and that entire row of cards will 'panic', causing them to rush headlong into the stack next to them. You're forced to shuffle them all together and when done, flip only one card over. This has the impact of undoing any work you may have done in any of those two rows.

As players are representing certain officers on board, you have character cards that imbue you with different abilites. Some can dig deeper in the deck faster, others have easier access to the action card deck (a stack of cards that can help you break rules and otherwise manipulate the game), and others can even play the action cards of others, maximizing options and efficiency. Certain characters are powerful but not allowed at lower player counts.

That's right, I failed to mention that this is truly "multi-player Solitaire." (Har dee har har). You can easily play this solo but you can also play this with up to four other friends. If you're wondering how this might leave other players with actual things to do, on your turn you can manipulate and move cards first, then you flip cards and place what you can. After that, your turn is over, so any new plays go to the player beside you.

The flip book puts a real time crunch on the game, and it's much worse if you fail to place on a flip. If too many pages go by, the final page shows the Titanic fully underwater...the game is finished.

I'll tell you, the game is tough as nails. My wife and I tried six straight games. We came what I'd charitably dub "close" only one of those times. Since we were working together and most folks are familiar with the traditional style of Solitaire, it seems less prone to the whole bossy player syndrome. The instructions even say that if it's your turn, you get to make the ultimate call, no matter what the rest of the table thinks. Personally, I think that rule applies to any co-operative game and I've always played it as such. Maybe that's why we've never had issues with any of my groups playing these kinds of games, who knows.

There were little thematic touches I really enjoyed. All the low-value cards were women and children. Since escaping the boat involves playing a lifeboat--effectively the ace--that means that it's truly "women and children first" on the lifeboats. First-class and steerage passengers do not mix...even in the face of tragedy, there was still this adherance to the nearly caste-like system of rich and poor. I can really appreciate how difficult it is to work theme into established frameworks; it's something I've always admired a great deal about some of the Mystery Rummy games, particularly Jack the Ripper.

I liked this a lot and have a feeling it would appear on one of the many infernal "get my significant other to play games with me" lists on other board gaming sites. Humorously enough, I don't think my wife quite liked it as much as I did. A lot of that had to do with one of the limitations of the parent game, in that a terrible draw or even bad card mix will doom you before you ever begin, no matter how clever your play. That's a fair complaint, though I made my peace with that regarding most Solitaire games a long time ago.

I think failure in this game hits you at a more personal level, though. Each card in the game rescued means that lives are saved, and when the game is over and people are still aboard, your failure can feel more personal and direct since it's based on a real tragedy.

I liked this game quite a bit. I know that some of my admiration comes from how nifty the theme integration was done. And I don't think it's a game I'll always be reaching for, although the ability for traditional solo play will definitely be appealing for many. It's an affordable package, well-produced with the aforementioned flip book and a deck of narrow yet high quality cards. The cards are of such nice stock that despite their weird size, the fact I can't sleeve them doesn't bother me at all. (I'm generally a sleeve freak.)

Definitely worth a look, either from Solitaire fans, or even from an theme-academic sense.

And that's going to do it for this installment. So until next time, take care and happy gaming.