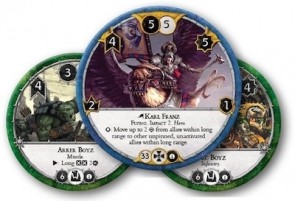 I’ve already gone on about Warhammer: Diskwars but let’s make it official with an actual review. FFG’s best game since X-Wing. I just got a second starter set and I played my first two set game last night. The army building was, of course, much more interesting. My buddy had a two regiment Ork army that focused on Boyz with Big Bosses to remove their activation tokens- nasty combo when Arrer Boyz are shooting twice or more per round.

Definitely worth it, I think, to double up on terrain cards and to have two full sets of the initiative cards available. You do wind up with some uniques that aren't useful and lots of extra tokens, but by and large there's not much waste.

Got to play a couple of three player rounds of Wiz-War with the Malefic Curses expansion. My god, this game is so awesome. It’s strange that it’s stature isn’t bigger than it is, especially with it being one of the REALLY GOOD FFG reprints. When all is said and done, I prefer it to Mage Wars, Summoner Wars or any other game where wizards shoot stuff at each other.  It was such a big game for me and my friends back in the 1990s, that ancient Chessex 5th edition…playing with those crap ass components…

We play it old school…full deck of cards (none of this "schools" crap), treasures make you stop, all that…but we do use the FFG maintenance rules, that makes sense to me to have an upper limit on what all you can have going on, it keeps the game wieldy.

So Dark Souls II is out and my lame ass never finished the first one…sad, because it is arguably the greatest game of the past console generation. So I’m grinding through the Undead Burg again, decided to just start over.

Also started Donkey Kong Country: Tropical Freeze. Let me tell you, if you like platformers and you don’t own a Wii U, you’re an idiot. Between this, SM3DW and Rayman Origins you’ve got the best three platformers of the past five years at least. Screw all of these little indie wannabes. These are the real deal. God, DKC is hard. But like Dark Souls, it’s hard but fair.

I picked up this silly game called Block Legends and it’s the stupidest thing I’ve ever seen but man, it is deadly addictive. It’s a match two. Tap on a pair, it busts and you get attack, magic, exp, gold, or life. Sort of like 100000, you run up and fight a monster. It’s got a subtle layer of strategy to it, it’s incredibly easy to play, and there’s tons of unlockables…no IAPs. Fun stuff.

Devious Dungeons is from the folks that did League of Evil. It’s kind of a Rogue Legacy inspired thing, but it’s way too easy and features little variety. Worth a dollar, I don’t know.

So True Detective ended, now I’m in the mood for more quality TV. I may try watching Game of Thrones again…if I can get through the shitty Harlequin romance “taming the savage man” crap that it kicks off on.  All that silly stuff with Edgar Winter and that barbarian man, and how Edgar Winter (I think it's the female one of the twins) learns through lesbionics to do something other than semi-rape doggy style.  SO corny, I can’t belive that it’s in anything regarded anywhere near “great”, let alone “good”. How is it possible to watch those scenes without laughing at how ridiculous they are.

Every time I think Clone Wars can’t get any cooler…first episode of season 4, massive underwater battle between Mon Calamari (led by CAPTAIN Ackbar) versus Quarren. With Kit Fisto and this freaking shark guy in the mix. This is just after a couple of episodes with Chewbacca and Asoka on the run from Trandoshan hunters.

Like most of the world, it seems, I got into the new St. Vincent record. I had heard some of the previous work but it didn’t really move me. I thought it was OK, but not particularly remarkable beyond her subtly great guitar playing. But man, the new one. Holy shit. There are a couple of tracks that are as good as anything we are likely to hear in 2014- “Rattlesnake”, “Birth in Reverse”, “Digital Witness”, “Regret”, “Psychopath”…this stuff is definitely on the right side of the highly abstracted and generalized Bowie/Prince paradigm. It feels very much like a “artist’s statement” record. I definitely like her more skronky, mutant disco-y, harder edged material than the quasi-Annie Lennox art-rock balladry but there’s still some really great songwriting and arrangement on those tracks too. Totally hooked on it…not quite Chvrches hooked, but close. Sucks, because she was here in Atlanta Saturday night and I started listening to the record Sunday. THANKS. I actually would have gone to the show, I think. Probably not, likely sold out since she’s the hot indie sensation right now.