Barnestorming- Looking at Legendary, Race for the Galaxy, The Hobbit 2, Halston, Kate Bush 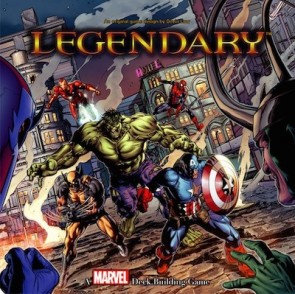 I’ve already gone off at length in the forums on Marvel Legendary’s absolutely inexcusable artwork and graphic design, but I kind of want to broadcast it wider on Nohighscores.com in case Stan Lee might be listening. Or the ghost of Jack Kirby. At any rate, whoever OK’d the art and layout for that game needs a visitation of some kind. Anyway, the article is subtextually about the importance of artwork in expressing theme, modernity and good taste. And it’s really kind of the #1 place where comic book games fuck it up. Pretty much all of them other than the GW Judge Dredd games…they had the sense to hire folks like Dave Gibbons and Brian Bolland to do the artwork. And as such, the games look amazing and capture their comics themes well.

I got the game in a trade/sale from our very own Josh Look, who warned me ahead of time. I'm convinced he's getting revenge on me by destroying my eyeballs with it.

Still playing Race for the Galaxy…moved from Keldon to the real game, mostly solitaire with the Gathering Storm expansion. Folks, it rules. I had never played the game other than the base multiplayer. But the solo option is quickly becoming one of my favorite “alone time” games. Of course, I think that says a lot about the design and level of interaction in it…

I’m done with Pathfinder. Great game, had a great time with it. Loved building my characters. But after the last expansion, I’m completely exhausted with it. If there’s one thing that game is missing, it’s a compelling overall story. The actual narrative that frames it is almost as negligible as what you’d find in a b-level Eurogame. The turn-to-turn narrative is strong, but there’s no sense of an actual overall quest despite the four or five paragraphs of flavor text. There also needs to be more dynamic goals. Maybe the new set will address these problems. Still one of 2013’s best, still a great game that comes highly recommended. But off into the sunset with it for me.

Taking a break from Dark Souls…I’m in a really stressful part. Tried to run naked through the Valley of the Drakes, that didn’t work out so well. I did persuade one of them to jump off a cliff, which was hilarious. Hydra still flummoxes me. Tried running naked around him too. That’s become kind of my “recon” tactic, which I suppose is pretty common.

Donkey Kong Country Tropical Freeze is laughably hard. Like, you screw up and you just laugh because it’s so damn hard. I think it’s much more difficult than the last DKC game. Probably not has hard as 2 and 3 were on SNES though, good god. Still have nightmares of mine cars.

Tried Thomas Was Alone since it’s the new PS+ title. I think I’m over the whole quirky, minimal indie with a cutey-poo, understated story. Some interesting gameplay concepts but I don’t know that I need to spend more than an hour with it to see it at its best.

Suburbia…wow. Now that is a Tin Man of a game if I’ve ever seen one. It has absolutely no heart whatsoever. I don’t know that I have ever played a more soulless board game. I don’t think it’s bad, and in fact I think it’s pretty decent on the iPad but I can not imagine playing it live with a physical game and doing all of the math. I can not for the life of me see how it would be fun in any way to work out the optimal placements of the pieces without the computer assisting you.

I’ve really gotten into this Arc Squadron thing, it was free a couple of months ago and I never really looked at it. It’s basically a Star Fox style game with touch controls. Super easy to play, short levels, great arcade gameplay. Three star system, which is always good. Problem is that is has 0% of Star Fox’s personality.

A little Super Stickman Golf 2…gosh, that game is so good. So dumb, but so good.

After some time off, I’m hunting for new reads again. Legendary put me in that Marvel mood…now if I can just find something that has nothing to do with one of their bullshit crossovers that I haven’t already read…heard good things about X-Men Legacy, might check it out. Apparently there’s an issue that’s an extended Watchmen joke. Rounded up a pile of current books…hope to catch up on The Wake, that was a good one I let drop off.

I’m in the middle of watching Desolation of Smaug. Well, actually, I think I’m almost done with it. It’s…I dunno. I kind of feel the same way about it that I felt about the first one- I wish that LOTR Peter Jackson made it and not King Kong Peter Jackson. It is definitely better in some parts. But it’s also pretty bad in others. Commando ninja elves are just ridiculous…especially because there is no real stunt work and they look silly flippity flopping around and performing circus arrow tricks. Smaug was pretty awesome though, the whole scene with him and Bilbo was mostly pretty good. Laketown was a good interpretation and I thought it was a fun little interlude that showed a very different side of Middle-Earth. Beorn was a fucking disaster, some of the worst makeup I’ve ever seen. Bard looks like crap too, seriously, the hair and makeup in these films are awful. The orcs looked so awesome in LOTR, most of them look really crappy in these films.

I’ll probably finish tonight and watch it again.  If the whole "love between an elf and a dwarf" thing doesn't chase me off. Good grief.

I think there’s only one of you who would be interested in this (Uba), but I watched a great documentary about Halston, Ultrasuede: In Search of Halston. I’m like obsessed with Halston right now. Probably means nothing to most of you. “Back to the Hobbit talk, Barnes!”

On Game of Thrones, maybe you don’t catch this so much watching it episodically…but GOD DAMN IT am I tired after just one season of watching people be dastardly, conniving, dishonest, cruel and generally bad to other people. It’s TIRESOME. It’s not “gritty” or “realistic” at all. This is a story where every fucking person except ONE that dies early is a dirtbag, liar, murderer or usurper of one kind or another. But even Ned lies. Even Arya murders somebody, I mean come on. There’s zero heroism, integrity, honor or morality in almost all if not all of  these people. That isn’t fun or appealing to me. It’s miserable and it loses impact. By the time they round up the bastards, I wasn’t shocked, I was just like “oh, this is how they do thangs down in Westeros”. I mean, they showed (off camera) a baby being killed. And I was just like “*shrug*, Game of Thrones”.

But what the fuck does that say about audiences when it takes fantasy with no heroes and no sense of justice or virtue to get people interested in a genre program? Low fantasy is one thing, but this is low fantasy with almost no redemption. Even Conan accidentally did the right thing or was on the right side of a conflict from time to time.

I did like the dragon reveal, I thought that was actually really cool. And I did like the intrigue involving the medicine woman…the “healing” scene with the demonic screams from the tent, now that was pretty awesome. All off-screen. Very chilling.

So I’ll trundle on. I don’t hate the show, I do actually like it to the same degree I like Firefly. The relationship between Shae and Tyrion so far has been one of the more interesting angles…mainly because she just owns him. I’m sure she’ll wind up decapitating him or murdering his entire family at some point. Or vice versa. Probably both.

Kate Bush, Kate Bush, and Kate Bush. I saw the notice that she was doing some shows in London later this year that I won’t be attending, so I rolled out “Hounds of Love”, one of the undisputed great albums of the 1980s. Even if the only three songs on it were the singles “Running Up That Hill”, “Cloudbusting” and “Hounds of Love” it would still be one of the best albums of the decade because those are three of the greatest songs of the 80s.

I went back and watched the videos because I remember them making an impression on me when I was 10, 11 years old…River and Scarlett for whatever reason LOVE the video for Cloudbusting. I get requests to play “the scientist video” all the time now. They sure as hell don’t make them like that anymore.

Discuss this article
Log in to comment
Posts in discussion: Barnestorming- Looking at Legendary, Race for the Galaxy, The Hobbit 2, Halston, Kate Bush