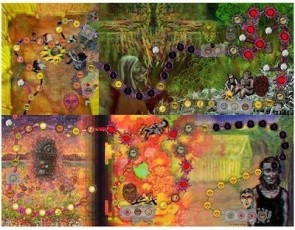 It’s time to file a review of The Mushroom Eaters, the latest game from Nate Hayden (Cave Evil). I would say that you absolutely must play this game, but the reality of it is that a) it’s a pretty hard game to get a hold of and b) odds are that most people won’t like it either because of the art style, the unusual elements of gameplay (there’s no opposition, for example) and of course the potentially controversial drug-related theme that would probably cause a fair number of board gamers to pitch a hissy fit in the BGG forums if it were higher profile.

I think the game is incredible, a true work of art that transcends just about every fucking thing that anybody else is doing with games as an expressive medium. This game puts just about everything else out there to shame in terms of expressing a MEANINGFUL theme instead of some played-out nerd bullshit.  The production of the game is DIY (and genuinely DIY, not some Kickstarter bullshit), but it has one of the most brilliant ideas I’ve seen regarding how the board can be used to describe what is going on. I spoil it a little in the review, I just had to. It’s _nuts_.

So yes, Nate Hayden. You sir. If you never design another game again, you’ve made quite a mark with this game and Cave Evil, at least as far as I’m concerned. Sign me up for whatever is next.

Back here on earth, lots of Legendary…I’ve just played  a couple of multiplayer games, but I think it’s definitely a solo game for me. Friends were kind of meh on it and I don’t blame them, but I’ve really enjoyed playing it by myself with some modified solo rules that don’t suck and cause the game to either end on the second turn or that don’t give the mastermind a chance in hell of stopping the heroes.  I’ve really got to do something about that news reporter card, I just bust out laughing when I see it. It kind of looks like a drawing that would have been in a school textbook, but the guy is just incredibly angry at this superhero fight that is going on behind him.

Lots of Race for the Galaxy too…I’ve got a Retro-view coming up on it and the three expansions. Don’t have Alien Artifacts yet.

I still have nothing to review right now,  there’s a weird lull and I’ve been stiffed by a couple of publishers that I’ve sent requests to. So no Myth review from me, it seems. Guess it doesn’t matter since thousands of people bought it sight unseen.

Major progress in Dark Souls. It’s funny, sometimes you’ll play the game for two hours and just completely waste your time, getting nowhere. Other times, you’ll make giant strides in 30 minutes. I just got to Blight Town, made pretty quick work of The Depths. Gaping Dragon was really kind of a pushover- at least with one phantom summoned and Solaire helping out.

Had a GREAT invasion last night. Dude came in right before “Beatthatpussay” or something like that and I were heading to the boss fight. He was pretty high level, it seemed.  He led us on this crazy chase through the entire level, hitting and running. He actually taunted us over a pit so we pulled out bows and started pincushioning him. He screwed up and fell, so it was just a nasty beatdown from there.

Undoubtedly the best game of the past generation. There’s just no comparison in terms of depth, raw gameplay, atmosphere and challenge.

Played a couple of pretty decent roguelikes, Cardinal Keep 2 and Shattered Planet. Shattered Planet is VERY polished and has some fun things going like a random item generator that gives you things like stormtrooper and Daft Punk helmets. Unfortunately, it has some freemium schemes going on so of course you never really have enough currency. Cardinal Keep 2 is probably the better game overall though.

Boy howdy, I hit the comics HARD over the past week after something of a lull. For some reason, I mostly gravitated toward female Marvel characters.

Kathyrn Immonen’s Journey into Mystery was pretty fun. It’s a light book focused on Lady Sif with some really nice art but it’s also a short run that doesn’t overstay its welcome. The last story is really cool, bringing back Beta Ray Bill for a compelling space adventure with his ex-girlfriend(s).

Ms. Marvel may be really good. It’s only two issues so far, and they were very good teen-focused (but unpatronizing) books not unlike Runaways. The writing is crisp and appealing and having a Turkish family at the center of the story is interesting without going overboard on the “see, Muslims are like us!” message. It’s no Battling Boy, but it seems like a book with a bright future.

Captain Marvel is pretty good too, I’ve never cared much for the character but there’s some good timey wimey stuff and some of that almost-too-much girl power business going on.

I think it makes a huge difference that these books are all written by women…books about female heroes written by men tend to lack a sense of authenticity. All of these books have that sense, and I really appreciate the change of perspective.

I also got a hankering to read Spider-Man, which is kind of weird because I’ve never really gotten into Spidey outside of the classics and occasional one-shots or miniseries. So that means I pretty much had to read Dan Slott since he writes like all of the Spider-Man books. His Amazing Spider-Man stuff was decent but pretty much by-the-numbers…which means it was familiar and comfortable but not really terribly progressive or compelling. I’ve enjoyed reading it (despite some HORRIBLE art) and I’ve found that I actually want to carry on to the end (issue #700) to get into all of that insanity about Doctor Octopus being Spider-Man. WTF.

Finally got to the Darth Maul bits of Clone Wars. Holy shit. The episode where Savage finds him on the trash planet and he’s this psychotic, deranged halfie with junked-out spider legs was NUTS. I absolutely love that they animated him like a Harryhausen monster, almost certainly on purpose. I always felt like Maul was too far on the silly side (ooh, guy with horns and devil makeup) but this show- once again- takes a crummy Lucas concept and makes it awesome. He’s scary in this.

River, Scarlett and I watched a great storyline this morning with Asoka taking Jedi younglings to find Khyber crystals so they can build their lightsabers. There’s a wookie kid in it that’s just adorable. He builds his from wood, which I thought was the coolest idea ever. The droid that instructs them on it (in a scene that is actually VERY Harry Potter) is voiced by David Tennant.

I still haven’t watched like the last 20 minutes of Desolation of Smaug. I don’t know why, I just kind of don’t care.

I sort of hit the rocks with Game of Thrones too, I was thinking I would just slam them until the 4th season premiere but I’ve gotta take a break.

The kids are into all kinds of stuff lately. Adam and the Ants in particular. They had a crazy dance party in the car the other day when “Electric Avenue” came on. That song is so great…but for some reason it makes me think of Steve Avery (RIP?). Maybe it’s the tanktops, I don’t know.

As for grown folks music…I’ve been listening to the Future Islands record which is apparently a big deal after SXSW and because their singer busted out a death metal growl on Letterman. I’m kind of not sure what to make of it.  It’s quality synthpop that doesn’t quite sound like anything else, and I do like that, but I get a sense that they might drift the way of The Postal Service and wind up in that boring, middle-aged post-post-new wave ghetto.The single is TREMENDOUS, “Seasons Change (Waiting for You)”. The singer’s over-the-top, melodramatic vocal style is REALLY unique, sort of a cross between Meat Loaf, Tom Jones and Louis Armstrong. There’s some good tracks…and I find myself really just kind of shocked at how expressive and sometimes uncomfortably intimate the vocals are. This guy is a front man in a way that bands just don’t really have much anymore. And his dancing is probably the worst since Ian Curtis.

Next week I'm listening to nothing but Suicide.

Discuss this article
Log in to comment
Posts in discussion: Barnestorming- The Mushroom Eaters in Review, Marvel Girls, Future Islands