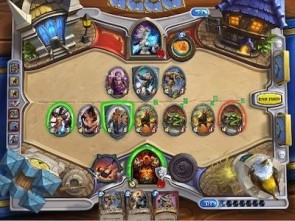 Free to be awesome.

Hearthstone on IOS came out yesterday, and if you have an iPad and have not yet downloaded it, you are an imbecile. It’s the best tabletop game you can play today, right now, no matter where you are as long as you have wifi. I’ve been playing it since February on PC, now I’ve got everything on the iPad. I played for three hours straight last night…and spent $0. It is by far the best example of free-to-play I’ve seen to date…you’re incented to spend money because the game is good, not because of psychological tricks. Review here.

Want a game? Zurenarrh. My Hunter deck will completely eff you up.

I’ve actually gotten a couple of responses back from review copy requests so some things are trickling in…one is Monster Derby, courtesy Jeff Siadek. I already know the game is great, but I’d like to give it the full treatment. Another is a weird looking Italian dungeoncrawl that looked oddly appealing…it’s called Super Fantasy, which I think is awesome. Looking into Rogue Agent (paging Mr. Buonocore…), emailed the Ars Victor guy but didn’t get a response.

I had to put Dark Souls down for a while…that game, sometimes it is just full of shit. I’m going to pick it up again next week after I regroup. Blight Town, god damn it.

Well, I was going to buy Yomi but then Hearthstone came out…I’ll probably pick it up this week.

Back in the olden days before Hearthstone, I was playing this goofy roguelike called WazHack. It’s basically a 2D, side-scrolling Nethack with these incredibly goofy and really quite awful graphics. But it’s hit the spot recently, moreso than some of the other roguelikes out there (and now, there are MANY).  It’s another example of a good “freemium” game- you can play any of the classes up to 300 feet, and then you get a message- including a picture of the designer smiling at you- saying “hey, glad you’re enjoying this, if you want to play the rest of the game it’s a dollar”. I gave the guy a couple of bucks.

Finally polished the Waid Daredevil run. It held up extremely well over 36 issues, and I’d say it’s definitely up there with the Morrisson Batman and the Brubaker Cap. It’s such a well-done arc, start to finish, that doesn’t so much redefine the character as it does celebrate it.

There were some real surprises throughout- a genuinely moving short piece about how kids with cancer perceive superheroes, an absolutely insane piece of courtroom drama, some pretty sick bad guy machinations, plenty of classic New York-as-seen-by-Marvel stuff…late in the run there’s a storyline that is STRAIGHT out of Marvel’s 1970s playbook. Doctor Strange is involved, there’s monsters (as in Frankenstein, a mummy and a werewolf) , the old Defenders baddies/racists Sons of the Serpent are involved…I kept expecting Son of Satan to show up.

All in all, it’s just a fun, brisk read with some super high-quality writing and artwork and one of the best portrayals of Daredevil _ever_.

I also picked up the new Flash Gordon book from Dynamite, which is getting rave reviews. It’s OK, I guess. It packs in a whole freaking lot of Flash Gordon into one issue though, so it feels breathless and weirdly kind of desperate. Too early to tell on this one.

Going to read The Fifth Beatle this week.

Had a little Victorian science fiction kick this week- don’t you dare say “steampunk”. “Steampunk” is The Wild, Wild West…not 20,000 Leagues Under the Sea.

Anyway, damn, the old Journey to the Center of the Earth is TERRIBLE. What a boring movie, despite Jehmz Mehzuhn being in it. The duck, all of the boring rocks, endless drawing room babble for like 90 minutes of the film’s two hour run time…and oh, the dinosaurs. Those poor, poor dinosaurs.

The George Pal version of The Time Machine is much better…I remember watching it when I was little and just thinking that there’s no way that fancy chair could be a time machine.

20,000 Leagues is clearly the best of all of them though, such a great adventure film. Jehmz Mehzuhn is so awesome as Nemo, Kirk Douglas, Peter Lorre…great stuff, great design…love that dinner scene.

I was resistant, but The Faint’s new record is pretty great. I followed them semi-religiously up through 2008’s Fasciination, which I thought was an incredibly dull record made by a band that had gotten bored. Doom Abuse in a lot of ways really kind of gets back to Blank-Wave Arcade- it’s rougher, punkier and not as sprawling as Wet From Birth. But it’s not as thrilling and sexy as Danse Macabre. There’s a couple of awesome tracks where I was just like “OK, The Faint are back”. “Animal Needs” is a mantric anti-everything screed, “Mental Radio” sounds like old Cure, post-metal. “Help in the Head” comes on strong as the lead track/single and has a killer hook and some mighty fine playing/programming. The only stinker is “Salt my Doom”, which sounds like weak Ministry- which is not really the kind of sound that I associate with The Faint.

Discuss this article
Log in to comment
Posts in discussion: Barnestorming- Hearthstone (IOS) in Review, WazHack, The Faint