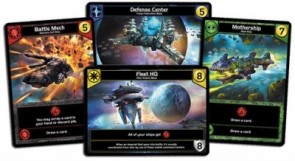 Hang on boss…don’t sleep on Star Realms. It’s REALLY good, and I think it’s the best pure deckbuilder to date. Better than Ascension.

Why? Mainly because it’s lean, tight and the resource you are mostly trying to generate more of each turn is DAMAGE. That’s right, Star Realms is a good old fashioned head-to-head (or multiplayer) spaceship battle. You build ships to get more stuff to build ships that shoot the other player. But there’s some neat stuff going on, like bases and faction combos.

Oh…and it’s ten bucks from a discounter, $15 at a FLGS. Worth every penny.  I especially appreciate that this game isn’t stuck in a $50 box with a stupid board and some kind of silly crystals or something. It fits in a coat pocket or a backpack, and it has everything you need for two in one package. Want more players? Buy another box, if you only ever play with two you don’t have to buy a set that has more than what you need. This is smart stuff, and I think it will be a well-deserved success.

Tons of new stuff, still reaping the rewards of my shameless MDMAVX strip-mining and some judicious trading to slake my thirst for old timey German games. Incoming are Taj Mahal, Medici, Ave Caesar, Attika (YES!), Niagara (I think the kids will love it), Zooloretto (ditto), Serenissma 2nd edition (which I’ve been wanting forever)…trying to wrassle Thebes, Expedition and Alhambra to my shelves too, if anyone has them and wants to part with them. I actually kind of want Kardinal & Konig, I’ve never played it in its physical form, only on this ancient web thing I played like ten years ago.

Lots of game time with the kids this week. They LOVE Midnight Party. I got them playing Takenoko with some simplified rules I made up on the fly, and that was a hit too. I really like Takenoko, it’s cute but has some cool ideas going on and a fun story. I guess I really like Bauza, come to find out.

AEG sent one of their giant care packages…I’m going to do a full expose on the contents soon, but it looks like the big win out of it is Sail to India. It’s another Japanese design, but this time it’s a sailing/trading/exploration/PU&D game. VERY minimalist like Love Letter. I think there’s 17 cards and 13 tokens per player. There’s a neat concept where your cubes (sort of like Carcassonne) change their roles based on where they are at a given time. It’s slightly confusing but mostly simple…and it feels much bigger than it is. Valley of the Kings seems like a pretty interesting take on deckbuilding…really kind of more of a set collection thing.

They sent me the wedding edition of Love Letter, which I think you can only get direct from them if you’re getting married. We’ll start the bidding at $100. (kidding)

Not much lately, just Mario Golf on the 3DS. Freaking Mario keeps beating me on this tournament I can’t win, the jerk. Probably cheating.

May get Mario Kart 8 this weekend.

I got the kids Whoowasit, an adaptation of a Knizia electronic talking board game. It’s a simple deduction game where an evil wizard’s mole in the kingdom’s castle has stolen a magic ring and hidden it in their belongings. The adults ride off to go find the wizard, leaving the kids in the castle. The animals in the castle saw the robbery, but will only dispense clues if you give them the food they want. So  you have to go around and talk to animals and look for food. Random events happen (good and bad) and you’ve got until 6pm to reduce the suspect list, find a key, and unlock the right chest. There’s also a spooky ghost that runs around. They really like it- I think it seems too long, but they really enjoy playing it and ask for it all the time now. Ravensburger just used the voice samples from the board game so it sounds terrible.

I finally sat down to go through the Le Havre tutorial. I still have no idea what I am doing, yet I’ve won a couple of games against medium-strength AI.  It seems pretty interesting, but I would NOT want to play it IRL in any way, shape or form. And I would NEVER want to be the one to do the rules talk on it with new players. Good grief, so complicated.

Finished Season of Mists and enjoyed it as much as I always have- I still think that’s the best Sandman story overall. It’s a little precious, a little kooky and a little pretentious…but hey, that’s Sandman.

Just read the next short, Distant Mirrors: Thermidor, and it was really good- I had never read it. Cool horror story.

Saw a couple of Jackie Chan pictures turn up on Netflix…it’s been a while.

Back in the early to mid 1990s, I got HARDCORE into the whole Hong Kong thing. I used to go to this Chinese movie rental place called Comedy Plus Video. They would get one legit tape and then they had a bank of double deck VCRs and they’d just dub extra copies. You didn’t have to have anything to rent there, you just showed them your license and paid them two bucks a piece for a week. And of course, almost everything was English subbed (often very badly) since it was still pre-1997. So I’d go in and ask for the Woo/Chan/Hark/Yun Fat/Lam/etc. films by their English names and they’d have no idea what I wanted.  I didn’t know that Hard Boiled was actually called “Hot-Handed God of Supercops” in Cantonese. Sometimes I’d just get random stuff. Usually not very good, but sometimes there were some unforgettable gems…I don’t know if I would have ever found Deadful Melody otherwise. At one point I had this obnoxious VHS collection of something like 600 Hong Kong films. You name it, I had it.

But back to Jackie Chan…I watched Legend of Drunken Master (really Drunken Master 2), which was always my favorite Jackie Chan picture. I felt like that was his last really great one, and you could kind of tell that he was just giving it 150% because at that point, he was 40 and the days of the really crazy stunts and the body-slamming Peking Opera fight style was ending. Like most Jackie Chan movies, it’s really not that good (but better than most) but you’re watching for the action. Not for all of his silly mugging or the threadbare plots.

I had forgotten how utterly breathtaking the last 20 minutes of this film are. The fight between Jackie and Ken Lo is the greatest martial arts fight ever filmed. Including the Bruce Lee canon.  It’s just stunning watching these guys move, the choreography (apparently Jackie directed the entire scene, which miffed the nominal director Lau Kar Leung). But then Jackie is breathing fire, guys are on fire all over the place, he almost gets impaled and crushed a couple of times…so crazy, no stunt doubles, wire work, CGI or fancy editing. Lots of long shots at a medium angle so you can see the whole fight like a Street Fighter match.

I might watch Project A tonight, the last time I did I didn’t make it through. Operation Condor (aka Armor of God 2) is on there, that’s got some pretty awesome stuff in it. Really wish they had Police Story and the first Armor of God. And City Hunter (go ahead, sing it if you know it).

Now I’m wanting to go back and watch Dragons Forever (the second greatest martial arts fight ever filmed, the big showdown with Benny “The Jet” Urquidez) and Eastern Condors, Sammo Hung’s ridiculous attempt at doing a Rambo-style jungle adventure. There’s an amazing fight in that one too. Yuen Baio was really kind of underrated.

They just don’t make ‘em like they used to, that’s for sure. I haven’t even see a Jackie Chan film made in this century.

Well, it had to happen after the Celtic Frost bender- it always does- but I’m on to Voivod now. Voivod are, along with David Cronenberg, one of the few things that Canada has produced of value to the rest of the world and they should be regarded as a national treasure.

The first couple of records are really more Dischargey/Venomy/Motorheady punk/crossover. Good stuff with AMAZING artwork, it’s too bad Away never did board game art. But then you get to Killing Technology and suddenly this Killing Joke/Amebix/Pink Floyd thing starts happening. That record is so freaking good. But Dimension Hatross is even better, and it remains their best IMO. Most folks go with Nothingface, which is good too, but for me it went a little too far into the proggy areas and left behind some of the crusty punk that informed their earlier sound. Even though Voivoid is my second favorite metal band (after the mighty Frost) I’ve actually never listened to anything past “Angel Rat” apart from a few snippets here and there. I may venture into the wilds.

Or I may just hit Prong next.