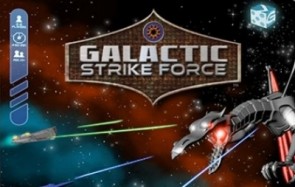 I’m kind of surprised that there hasn’t been more hype for Galactic Strike Force, the new game from the creators of Sentinels of the Multiverse. I know it’s just barely out in the wild and all, but it seems like the follow-up to a very successful title would be getting more advance notice.

Well, here’s the thing. It’s a decent game…but damn, it is a pain in the ass to play. Tiny card fonts that describe card effects that everyone at the table should be aware of are impossible to see from more than arm’s length. Each of the five phases has an advance phase where you have to scan everything on the table to see if an effect goes off. It’s really less administrative than Arkham Horror, but it feels like more of a hassle. Then there are mountains of +1 and +5 chits on virtually every card. And for pete’s sake, who needs a counter that says “0” on it?

But the concept is great, and there is- dare I say it- almost an FTL-like quality to it. You spend the game buying parts to tool up these ragtag spaceships to face off against a boss ship at the end, all while trying to keep the galaxy from collapsing. Which is a tall order in this game, because it’s hard as balls. Thing is, I’m kind of tired of games that are hard just because you drew the wrong card or didn’t bring a certain character. This kind of feels like that. Sentinels did too.

So I have mixed feelings about it. I think it’s pretty inexpensive and it is definitely worth looking at for yourself. Here’s the review.

I got the Knizia Star Trek game, not sure why it’s gotten such negative comments from some folks. It’s WAY more thematic than a lot of other adventure games. It’s as thematic- if not more so- than The Queen’s Gambit. Knizia really hit the feel of Trek, especially one of the films, by having a three-plot storyline going on as well as a space battle, a race against the clock and side stories. There’s a little touch of the old Trek paragraph game in it, believe it or not.  Yeah, you roll dice and add modifiers to hit target numbers. Just like Pathfinder, right? Not sure about the replayability, but after one game I liked it. I think it does the branching storylines better than Legends  of Andor did, and in a simpler game.

Also coming in from the Eurogames Reclamation Project- China (Web of Power), Elfenland and Modern Art (another that is weirdly expensive these days). Really enjoying going back to some of these games…had a GREAT game of Taj Mahal the other day, ran through some Attika (which is, I think, one of the best games of the 2000s), got the kids in on some Niagara and Zooloretto. My main “hunts” right now are Alhambra, Manhattan, Hoity Toity and Manila. Really want Mississppi Queen/Black Rose…but $$$.

Just kind of taking my sweet time to savor Metroid Prime. That game holds up so well, there’s really nothing else quite like it. It’s a FPS, but the shooting part is so de-emphasized. Finding your way is where most of the game lies. The backtracking can be pretty harsh by today’s standards, but the areas are so well-designed and memorable I kind of don’t mind. The game also pulls off that same thing that Half-Life does, of making you feel like you’re really there, in that suit, and there’s a world going on outside of it.

Still playing lots of Mario Golf…I thought I did really well in one of the world tournaments, shooting 8 under par…but boy, was I wrong when I went to the award ceremony and the winner had like 25 under. I don’t know how that is even possible.

IOS makes some aspects of the Eurogames Reclamation Project easy, like getting in games of Medici, Samurai, Ra and Tikal. So lots of that stuff. I haven’t been compelled to pick up Le Havre again after learning to play it.

Fairy Tale came out, out of nowhere. It’s a really good implementation despite some terrible choices in handling transition screens. It’s free for the “novice” rules, $5.99 for the whole thing. I went ahead and got it all, I’m enjoying it and it plays really nicely on the format. Games are like 7-8 minutes, so it’s a perfect quick game. The setup is very, er, Japanese so there are some quirks but I really like that it shows me how much my points are affected by each play and I like that there is a “campaign” of progressively harder opponents. The AI is certainly no slouch, up around level 14-15 it starts to actually get pretty hard. Haven’t tried the multiplayer yet. I didn’t even know it was in development, so a nice surprise.

There’s been some talk about adventure movies in the forums so I went back to watch the first three Pirates of the Caribbean movies. It’s kind of a dirty secret that I don’t really like pirates all that much, but these movies are fun, lively and really kind of old fashioned. Big, silly entertainment designed to please the crowd. I love Depp and I would probably deem him to be one of the best actors of his generation, but he so totally overdoes it that he threatens to derail the series by the third film. I like the third one more than the general consensus…it’s an unruly, obnoxious mess but I think it’s got some cool stuff in it. Second is still the best.

Also watched Oh Brother, Where Art Thou, hadn’t seen that in a while. I still love it. Great music, great setting, great characters. It’s one of those films where I think I know every line.  One of the rare movies that actually makes me laugh.

Prong’s major label debut “Beg to Differ” is one of the most underrated metal records ever…back when it came out, it was a big deal. MTV used a couple of tracks to theme Headbanger’s Ball. They were really a crossover hardcore band on their first two records, but then Epic came a-callin’ and they refined their sound into a uniquely violent breed of urban thrash that sounded as influenced by Killing Joke, Swans and Chrome as the standard metal lineage. Staccato riffing, lockstep rhythms, barked HC vocals…this record sounded very different at the time and by the time Helmet and a host of other “alternative” metal bands came along Prong moved on to a more mid-1990s industrial sound that wasn’t nearly as compelling. I do like “Prove You Wrong” a lot, but even by then you could kind of tell that they were sort of past their peak.

River is totally getting into 70s rock. This week he asked for Black Sabbath and Alice Cooper constantly.

Scarlett on the other hand, only wants to listen to “Let it Go”. They did a little end-of-school-year performance at their school last week and the “surprise” finale was all the kids singing that. Of course, Scarlett sat there and didn’t sing a word even though she hollers that song all the freaking time.