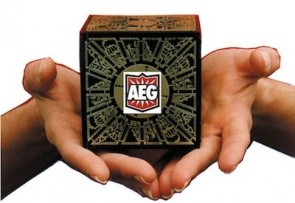 We have such games to show you...

AEG likes to send a bunch of stuff at once. A couple of weeks ago, they shipped me a press box filled with their summer releases  so I’ve been pawing over them and now I’ve prepared by full exegesis on what was in that big box. They actually sent Doomtown separately, but let’s not fuss over details. The write-up is here, but the TL;DR version is that Sail to India is a definite yes, Mai-Star is a yes and Valley of the Kings is a yes. Doomtown is a yes only if you are in a “Time Enough At Last” situation. Thunderstone and Smash-Up expansions are a yes if you are into those series and haven't jumped the train yet. The Romance of the Nine Kingdoms expansion is a no because that game sucks. Oh, and the two Love Letter versions they sent are probably the last before it becomes bowderlized with a Duck Dynasty re-theme.

The Eurogames Reclamation Project keeps touching lives across the country. F:AT’s own RobertB has contributed Winner’s Circle, and I got to run a three player game last night and I freaking loved it. I still like Really Nasty better and likely always will, but Winner’s Circle/Royal Turf is a good one. It’s fun to run a horse everybody else has bet on into the ground. I think all I have inbound right now is Pompeii. Black Rose showed up but we didn’t get to it.

Man, I forgot how good Adel Verpflichtet is…such a FUN game. It’s so quick-playing, the second-guessing is fun, and I love the mechanic of exposing yourself to risk in it.

A La Carte showed up for the kids, we tried it last night but they were tired and didn’t really focus on it. It looks really fun. I actually kind of wish the food was real stuff instead of Garbage Pail Kids-style grossout stuff.

I also found an old Haba game for them at the Book Nook for $5.99, Bauer Schnell. They LOVE it. It’s a simple PU&D co-op, feed the farm animals before sundown. Pick up food tokens in a wheelbarrow, take it to the animals.

The BIG winner this week though is My First Carcassonne, Z-Man’s reprint of Kids of Carcassonne. I think we played it 20 times over the past week. It’s a brilliant reduction of Carcassonne perfect for small children. Review next week.

Actually did some solo Ogre/GEV this week too.

Mario Kart 8. I got some of those stupid steering wheels for the kids. Send  help.

With World Cup fever going on and all, I’ve been playing this STUPID football game called Flick Kick Soccer: Legends. It’s this odd little thing all done up in this comic book style with all the characters rendered in 1970s football fashion- giant sideburns everywhere. The gameplay is mostly flicking to pass/shoot/intercept with these big, animated characters. It’s oddly passive, but it’s also oddly fun.

Also loaded up Speedball 2. Haven’t played that one in a long time. Still a lot of fun.

Lots more Star Trek. I just watched that one where Tasha Yar dies. What a terrible episode, that Armus thing could have been really scary and weird but he just turned out to be kind of lame. A lot of those early Next Generation episodes are pretty shaky, actually. I did like “Where No One Has Gone Before”, that one really felt like a leftover from the original series.

I’m not a huge Wes Anderson fan (apart from The Fantastic Mr. Fox, which I love), but I watched The Life Aquatic the other day. I want to like that movie so bad, because I love the setup and for the most part, the characters. But it just reclines into this lazy and not very interesting storyline about relationships that I care nothing about.

Started watching The Treasure of the Sierra Madre last night. Shamefully, I’ve never seen it. So far so good.

Still totally lost in the Chrome discography. Mostly listening to “No Humans Allowed” and “Chronicles I&II” right now. I’ve listened to “Gehenna Lion” and “Wings Born in the Night” like a hundred times this week. I still haven’t ventured into the post-Helios Creed stuff. I don’t know why, but I’ve never even been slightly inclined to listen to the Damon Edge era. Or the post-Damon Edge, Helios Creed part II era.

I did swing by to listen to some Helios Creed solo stuff. I’ve never really been able to get into it. I saw Helios Creed in a tiny club around 1992-1993, he was playing for literally ten people. Stoned out of his mind and just wailing through a board of 20-30 effects pedals for an hour. I don’t know, maybe that terrible “Mustard Dog” song  just puts me off his whole solo discography.

Discuss this article
Log in to comment
Posts in discussion: Barnestorming- AEG's Big Summer Box in Review, ERP Progress, More of the Same From Last Week