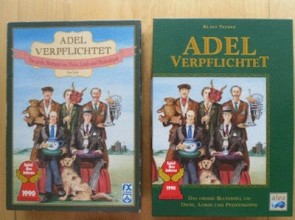 This is it, the official launch of the Eurogames Reclamation Project and the inaugural game being brought back from near-extinction is Klaus Teuber’s Adel Verfliptchet. I’ve been playing a beat-down Avalon Hill copy of the game and absolutely loving it. There really isn’t anything else quite like it. The theme is strong, the interaction is high and the douchebaggery is foul. It runs like freight train with zero downtime and you can get a table of five into the game in three minutes. Eurogames Reclamation Project #1: Adel Verfliptchet is right here.

You know another one I just realized is eligible for the ERP? Kremlin. Totally a Eurogame. And another example of how Avalon Hill was almost at the forefront of breaking German games in the US market. They also had Tyranno Ex, a Karl-Heinz Schmiel (Die Macher) design. But Tyranno Ex kind of sucked. I’ll have to get that Jolly Roger Kremlin and include it in the project.

Thunder Alley arrived courtesy of GMT. It may be amazing. It may be one of the top racing games ever made if it pans out with big groups and doesn’t bog down. I don’t think it will because the game cuts out a lot of the kinds of things that tend to slow racing games down.  But damn. It is TOTALLY a NASCAR racing game.

I also got in Relic Expedition, from first-time publisher Foxtrot Games. The graphic design is dynamite, the game just looks fantastic. It has elements of Survive!, Tikal, and maybe Goldland. I like it so far, it feels a little thin and in need of some of the Kickstarter-exclusive expansions that were parceled out. It’s definitely more on the family game end of the spectrum, which I like right now. My kids were able to kind of play through most of a game the other day.

I guess I’m about halfway through Shovel Knight on the 3DS. It’s pretty good, but it 1989 it would have been AMAZING. The nods to modernity are slight, the problem is that I’ve played this kind of game many, many times and even though it is a STUNNINGLY accurate recreation of the particular feel that those late 80s adventure/platform games had, it still is just another one. A really good, high-end one. But it’s still sort of beholden to this particular style. That I do like. Ugh, I dunno. I’m actually kind of conflicted about it because I do like it, but for some reason it doesn’t excite me.

I do like all of the different knights…it’s very Mega Man. Right down to having one weapon that is stupidly overpowered and beats pretty much everything. There’s this green ball you can throw, I swear I’ve beaten every boss with it.

World of Tanks: Blitz, pretty much any time I have a spare five minutes. I’m totally hooked. I even paid for a premium tank. I was running all Soviet, but I have three German tanks in the garage now too. I love the German tank destroyers,  StuGIIIs and Hetzers. I’m also tired of getting one-shotted by those, so if you can’t beat ‘em…

The game is perfectly framed for mobile. The matches are short (usually less than 5 minutes), the matchmaking is super quick, and there’s usually a couple of minutes of really good action in each one. Then there’s some tooling around you can do in the garage. I _love_ that it doesn’t make you sit and watch the whole match even if you get iced in the first 30 seconds, you can drop out and get in another tank and then your account will be credited for any winnings when the other match ends.

I’ll get Star Realms if it goes up tonight.

I realized that I had not seen Star Trek V: The Final Frontier in about 20 years. Because it sucks. But it was on Netflix, and there was a moment of weakness. So I wound up watching the whole thing. Good. God. Man.

I actually forgot about all of the really bad stuff. Spock’s jet boots. “Row, Row, Row Your Boat” (Trek’s lowest point?). Uhura’s GHASTLY hair and makeup, she looks like a corpse. Of course, everything to do with “god”.

I can’t imagine anyone liking that one…total failure. I remember seeing it in the theater and people were heckling it.  “Yeah, what does God need with a starship?”

Re-watched First Contact, that was much better although it has that weird cheapness about some of it that pervades all of the post-Khan/pre-Abrams Trek films.

Completely burned out on The Lego Movie. My kids are actually acting out scenes from it, which is kind of a first.

Still lots of Chrome, but I’m trying get loose of the iron grip…I’ve broken out into some Cabaret Voltaire, mostly listening to  the #8385 collected works comp, which is probably their most accessible period- and also before they kind of went south into some not-very-interesting techno noodling. There are some awesome tracks on here, hard-edged electro-funk that is way more influential and compelling then you’d think. CabVolt, for whatever reason, seems like the most underrated of the early synthpop/industrial pioneers…Throbbing Gristle, Suicide, etc. all seem to be held in higher esteem,  but CabVolt was just as crucial. “Sensoria”, “Do Right”, “James Brown”, “24-24”, “Just Fascination” and “The Operative” are good arguments. Oddly, I tend to enjoy CabVolt more in comps than on albums.

I did sally forth into Shriekback land after Legomancer mentioned them…unfortunately, Spotify doesn’t have the first two records or the Y Records singles. Their Shriekback story starts with Oil & Gold, which is a pretty good starting point regardless.