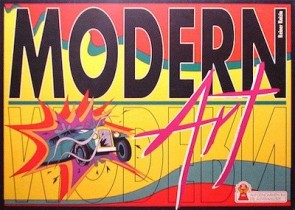 The ERP just keeps going from strength to strength despite the naysayers. Folks are talking about playing games instead of what they’re “backing” and may get to play in two years, we’re striking hammer blows against the Cult of the New and we’re rediscovering the value in games long forgotten. So this week at Nohighscores.com it’s #2 of my ERP series and I’m looking at Modern Art, possibly the best auction game ever published. Don’t like auction games? Fine, don’t play Dune. Modern Art’s auctions are more thematic than Dune’s. I’m not joking.

One of the really fun things about the ERP is that it’s giving me a chance to go back and write about games that I never really wrote anything about. Back when I played Modern Art in the mid-1990s a couple of times, I wasn’t even thinking about reviewing it or writing any kind of analysis about it. But the ERP has made it possible for me to revisit these games and get some thoughts down on paper.

Lots being played of late…

Really enjoying Journey to the Center of the Earth, not really sure why it was more or less completely ignored when it was released. It’s a fun family adventure game with some cool mechanics, great illustrations and a good sense of story.  I feel like it is a little too long though by about 15 minutes.  There’s lots of opportunities for combo-based gameplay, which is kind of unusual for this type of game.  I’m having to go back and revise opinion on Rudiger Dorn…I like more of his games than I thought I did. But Goa is still horrible.

God, Big City RULES.  Thanks to ERP lieutenant colonel Mike Chapel  for the trade on that.The thing is, the mechanics really aren’t all that great. They’re good, but it’s really just kind of an Acquire variant with bonuses for placing tiles/buildings under certain adjacency rules. But it’s easy to play and it’s just FUN to watch the city grow. I know Valley talked about reprinting this for years, but I think this is one we’l l never see again. Of course, Hotels came back, so who knows.

Wadenels recommended Bison: Thunder on the Prairie. I remember selling this game to folks back in 2006 and thinking “who would ever want this”. And here we are. It’s a really interesting tile-laying game with a great Native American theme. You play these weirdly shaped tiles with areas for turkeys, salmon and bison on them. Then you can put hunters down or turn hunters into tepees or canoes. You collect each type of animal, but then you spend those to do things. Then at the end, you reduce all your points to zero and do a final scoring to see who wins. It’s really quite heavy, it reminds me somewhat of El Caballero in that it’s really thinky and surprisingly dense. I got a couple of friends to play, but I think it feels like it would be a hard sell for most groups.

I got to play The Swarm last night with three and I kind of am in love with this game. It’s Kramer/Kiesling, so the same team that gave us Princes of Florence. But this game is far weirder and nastier than that Euro genre-destroyer. It’s based on some best-selling German thriller that sounds like some kind of Peter Benchley/Michael Crichton sort of thing. Some kind of intelligence in the ocean decides that people are dirty and must be destroyed so it starts sending out disease-infested crabs, whales and storms to wipe out humanity. Everybody plays a research group and you’ve got to put out research stations, send out ships, and recruit researchers to try to figure out what’s going on. There’s a cool action selection mechanic where everybody drafts from a line of cards that cost research points to buy- the further ahead you skip, the more expensive the card is. Then you play the cards to do stuff. There’s exploring, tile-laying, network building and putting hazards on other players to steal their points. Lots going on, but it’s pretty simple and really fun. One guy I played with, he just didn’t really get it and he got destroyed so I don’t think he liked it too much. But my other friend was right there on it with me and now he wants to read the book. You can buy this game for like $6 and it’s well worth it.

And more recent Kramer on the way, Asara. Also got a super cheap copy of Augustus for a little Bingo action. Also those Diskwars expansions since CSI had them for $14 a piece.

Want to help the ERP? Help me find reasonably priced/ tradable copies of Around the World in 80 Days, Evo (second edition), Tonga Bonga,  Anno 1503 (with the expansion), and Finca.

Welp, the Destiny beta ended. That stinks. But I was kind of ready to stop anyway to save some momentum for the release September 9th. I haven’t preordered a game in years, but I traded some things at Gamestop and just got it that way. I’ll probably get some stupid exclusive shotgun or something. Looking forward to it.

Blood Bowl came out. I bought the whole thing, $5 for the humans/orcs base and $3 a piece for each additional team ($17 total). It is the Cyanide game with a couple of good enhancements for touchscreen. I haven’t seen if the AI is improved, but league play is there so I’m sure Metalface is flippin’ biscuits right now. If there’s interest in a F:AT league, I’m in.

Traps & Gemstones, y’all. It’s a Donut Games thing, but it’s a little more advanced than their usual one trick pony games. It’s a simple Metroidvania with a cool Indiana Jones theme.  The goal is to find 25 relics and put them on pedestals. There’s barriers and equipment, hazards, platforming, angry mummies and so forth. Very cute.

The kids have been all up into the Disney Tarzan for some reason. So I’m hearing the stirring sounds of Phil Collins’ songs for it all the time. I don’t really care much for it, but the animation is really freaking good in it.

I watched The Adventures of Baron Munchausen for the umpteenth time last night. You know, I can never really discern if I _like_ the film or not despite my having seen it a hundred freaking times. And I will probably watch it again, maybe tonight even.

It’s just such a hard movie to really enjoy. It’s a mess, all over the place and just about as sloppy as a picture with that kind of budget has ever been. But it’s also so over-indulgent, decadent, and wild that it has an undeniable charm. There again though, I don’t like any of the characters and the theatricality of it is irritating. But it’s so loony and…EXPENSIVE…

I think what I _like_ about the movie is that it feels so wrong to watch such an expensive, immaculately produced movie that was such an utter flop. I also like that there’s almost a Fellini-esque quality to it.

Gilliam is such an odd filmmaker…he’s made all of these great movies that I’ll watch over and over again but each and every one of them- barring Time Bandits, which I think is almost perfect- irritates me in some way or another. Even Brazil. Fisher King, Tideland, Fear and Loathing in Las Vegas, Twelve Monkeys…love them all. But there’s things I just HATE about each and every one.

Looking at Brothers Grimm…I think there’s an awkwardness that I found really off-putting…I think that must be it.

Took a sharp left turn into doom/psychedelic metal. I had never really listened to Electric Wizard so I checked out the stupidly titled “Dopethrone” and was duly blown away by it. It’s a damn good record, shame about the asinine cover art that belies the quality of the music. Visited old favorites St. Vitus and Candlemass, caught up with some High on Fire records I missed, and wound up listening to Kylesa, whom I had always meant to check out.

So far so good…I was a fan of the crust/grindcore band Damad, where these guys/gals were before this band and I was happy to hear some of their best qualities brought forth and combined with a more expansive sound. There’s a good mix of sludge, hardcore and psychedelia, which makes it just want I want to hear right now. “Spiral Shadow” is a little better than “Ultraviolet”, I think.

I have no idea how this stuff comes from Savannah, GA. That place is so laid back and calm.