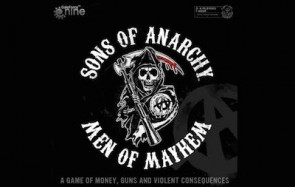 I love how trashy and violent Sons of Anarchy looks. One glimpse of the box and you know you’re not going to be exchanging brown cubes for VPs or quietly nodding as someone puts the last palazzo on their player board. In some ways, it could almost be the ultimate Ameritrash game-  it’s in bad taste, it’s full of guns and motorcycles, making money and threatening people. The beards are not the chili-catchers of the nebbishes that are making their way to GenCon as we speak, but the fuck-you whiskers of hard, brutal men that do bad things. I absolutely love this game, and although I think Spartacus is just a touch better than it (mainly because it has such an original format), this is by far one of the top games of 2014 and it may be GF9’s first Barnes’ Best GOTY prize after placing on the shortlist two years running. Here's the review.

Out of nowhere, GF9 is the company to beat. They are doing licensed, thematic games that just destroy everything FFG has done since their golden days before Horus Heresy. I love that the games are coming from TV show licenses, I think that’s very “of the moment” and although some will either complain about not liking the shows or worry about the longevity of relevance, I think in all three of GF9’s games there is MORE than enough game there- and universally appealing themes- to keep these on tables for years to come. Ten years from now, nobody will likely give damn about Sons of Anarchy. But the quality of the game is such that it just doesn’t matter. It may be the best crime game ever published.

They’re getting this thing into Target stores. But don’t wait for the clearance, this is one of 2014’s top games. I can guarantee you that you will see no other title this year that comes with little plastic Glocks and duffle bags presumably filled with drugs and pornography.

I got to play a couple of rounds of Diskwars with some of the new armies and I’m still very impressed with the game, even though I’m predicting that it’s going to die out slowly and wind up in the FFG holiday sale maybe as early as this year. The new sets add quite a lot to the game in terms of diversity. The Vampire Counts are pretty great, with lots of necromantic-type skills like you’d expect and an amazing Black Coach that you can ride out and smash into stuff. The dwarves have some cool machines, hardy fighters and this crazy statue that you can prop up and use to empower units. Lizardmen and Skaven both add some fun skirmishers to each side. I haven’t tried the Dark Elves or Wood Elves yet, nor have I looked at some of the units that are added to the core armies. Very glad I got these on the CSI deal-of-the-day.

Some major victories in the ERP this week. Two of my big-ticket targets are inbound, Amun-Re and Tonga Bonga. I’ve also rolled up Um Reifenbreite, Tower of Babel and Municipium. The hunt is on for Auf Asche right now, really trying to angle the 2007 FX Schmidt edition. It exists nowhere, apparently. I had an offer to trade for Evo (the one with the awesome Metal Hurlant dino art) but it was a day late and a dollar short. Sucks, because that game is ludicrously expensive right now. Thinking about snagging a cheap copy of Kramer’s El Capitan that I have a line on, but I’m torn between it and the original Tycoon. I like the original theme, such as it is, better. But I don’t like the larger box.

Tried to grab an Airlines Europe from CSI but I missed it. It should restock though.

Oddly enough, playing a lot of 6 Nimmt lately…haven’t seen that on the table in over a decade. Still a really fun card game with lots of “oh, that’s bullshit” moments. Hence the bullheads.

Dipping back into Dragon’s Crown since it’s free on PS+ right now. If only that game didn’t have those utterly grotesque women in it. It’s a pretty good Golden Axe-style brawler with some RPG elements.

I also decided to give Tomb Raider another chance. I’m not sure why. For some reason I felt like I ought to look at it again with fresh eyes and I was oddly in the mood one night for some AAA nonsense. I still really don’t like it and think it’s unfortunate that so much of the game is wasted on these awful gun battles. It just looks ridiculous, a guy with a bow standing five feet away completely confused at what to do because you’ve bunked the AI by just running up on him and shooting him point blank with arrows. I’ve played further than I did before, and the grim, gritty bullshit is about to make me check out of it once again. It’s a shame, because there are actually some things I like about it- the atmosphere of the island is cool, there are some really nice sequences (one in a wolf’s den is quite effective) and I like that there’s an emphasis on survival, hunting, foraging and so forth. But very little tomb raiding.

Uncharted is so, so much better…but even those devolve into asinine bloodbaths where the “heroes” mow down hundreds and hundreds of people to get what they want. What a shame that such talented developers can’t make an adventure game like this that is focused on exploration, discovery and wonder rather than violence.

Star Realms finally came out on IOS and it’s a tremendous disappointment. On the table, it’s the best deckbuilder out there. On IOS, it’s teeeeeeeny tiny. Not to the point of unplayability, but to the point of massive annoyance. It’s very clear that the UI and card graphics were designed not even for a tablet, but for a PC monitor.  There’s so much wasted space on the screen it’s embarrassing. There is practically no sense that this game was designed with IOS in mind. Compared to Ascension and Hearthstone (the gold standards), this game looks sloppy and sluggish. I shouldn’t have to zoom on EVERY CARD to play the game. I was going to go whole hog and get the $4.99 “everything” upgrade, now I’m thinking about just getting that new Ascension update instead. The thinking was that it was being delayed because Apple didn’t like the cross-buy feature, but I’m wondering if it wasn’t actually a quality issue.

More 6 Nimmt…the app is actually why I dug up the physical deck. Great time-waster.

I also picked up the Café International app since it was on sale, I had never played it. It’s the kind of game I’m absolutely terrible at, but it seems pretty decent. I don’t know that I’d want to play it on the table though.

I made it through 30 minutes of American Hustle. Not even the great clothes kept me interested. I swear I’ve seen this film a hundred times from other writers and directors. It really reminded me of Jackie Brown in a lot of ways, even though I’m well aware that it’s worlds away from that. Totally bored by it and have no interest in watching it further.

There was a great documentary about Bowie on Showtime (I think), it’s called Five Years and it goes into five key years of his career during the 1970s and up to “Let’s Dance”. Lots of really great unreleased and rarely seen archival footage and interviews with collaborators (Rick Wakeman, Carlos Alomar, Earl Slick, Robert Fripp, Nile Rodgers, etc.). There’s some interesting insight from some of those folks about Bowie’s songwriting and arrangement along with some great studio footage…very fascinating to hear Ava Cherry for example talking about how difficult the vocals on the “Young Americans” record were because he had such a specific idea of what he wanted out of the backup singers (which included Luther Vandross, then unheard of).

Of course, you also get to see plenty of Bowie coked up out of his mind during that part of the film.

Well, you don’t watch a documentary about Bowie and then not listen to Bowie. Hitting mostly his cocaine records, Young Americans and Station to Station.

Took a brief sojourn into Fugazi territory earlier in the week. Strangely, I haven’t really listened to Fugazi in quite a long time. They were for me, as I suspect they were for a lot of kids into punk, metal or other “alternative” musics back in the late 80s/early 90s a pretty significant band in my development as a discerning rock snob. I remember my buddy David Green coming over one day and he had a cassette of the “Margin Walker” EP…at this point we were mostly listening to Public Enemy, S.O.D., Anthrax, N.W.A. and so forth…Black Flag, Ramones, Dead Kennedys…lots of thrash and rap, lots of skate punk and American hardcore. The sounds of the disaffected in the suburbs at the time.  But this was really different, and it hit us like a bomb.

I just about wore a copy I made of the tape (home taping) out. I was so freaking into them. I actually didn’t get to see them until 1993, two shows sold out at the Masquerade here in Atlanta. Just amazing, apart from Ian doing his stop the show, “no moshing” thing.

But for some reason, after “In on the Kill Taker”, I never really got around to the rest of their records.  I thought I was going to this time, but I wound up stuck on “Repeater” and “13 Songs”. Maybe next week I’ll venture out into the wilds of “End Hits”, “Red Medicine” and “The Argument”.