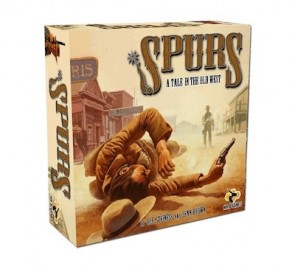 Not quite enough gun, son.

Well, that was nice. A Cracked LCD/Barnestorming reader, one Nikolaos V., wound up with an extra copy of Mr. B Games’ Spurs: A Tale in the Old West and offered it to me for review. So cowboy hats off to him for providing me with a new game to look at.

And it’s pretty good. It’s from the guy that did Police Precinct, and like that game it feels unpolished and sort of tentative, sort of hodge-podgey but still fun mostly due to the unusual setting. I think the design goal was to take the sidequests from an open world game and put them on the tabletop, because that’s what it feels like and even looks like on the table. But it lacks a strong overall arc and there are some sloppy, Kickstarter-y issues with the design.  It’s definitely fun, there’s lots of great flavor…but it still isn’t the ultimate Western game  that we all know is destined to exist one day. I do really like that it has some things other than the usual Western game fare- horse-breaking, cattle ranching and such- but they’re handled with some kind of cruddy minigames.

Definitely give it a shot though, there are some good ideas. I really wish someone like Z-Man or Asmodee had picked it up…it could have been another Merchants and Marauders with more development. Review is filed in its usual cubby.

I picked up cheap copies of Castle Panic and the expansion thinking that my kids could play it…it’s more read-y and complicated than I remember it being. I solo’d a couple of games with the Wizard’s Tower and I’ll echo what has already been said about it- the expansion is essential. Still not quite a great game, but it definitely shifts it from “pretty good” to “really good”. Love the spells, love the variety of monsters. And FIRE.

A mysterious benefactor sent me a copy of El Capitan so that is on the ERP table this week. It looks pretty interesting, not quite the business game I expected. Really more of a Kramery area control thing, which I tend to like. Sometimes. We’ll see if I can get past the Mike Doyle artwork and find the fun.

Still loving Tower of Babel, I think that game is hugely underrated.

Airlines Europe is on the way. Can’t wait.

Thinking about Black Fleet, but I’m afraid it will interfere with Tonga Bonga hitting the table.

Picked up Velocity2X since it was free on PS+. It’s awesome. Best game I’ve played in a while. It’s really a shmup where you can teleport your ship around, but then you can dock and it becomes a side-scrolling platformer. And it’s FAST. The levels are all really time trials so it’s very hectic and skill-oriented. The 50 levels are all bite-sized with multiple ratings (time, score, survivors saved, crystals collected and so on) so you want to replay them to get perfect scores. It’s not particularly hard to pass the levels, but getting full marks is REALLY hard.  Fun, clean art style…no mindless violence…actual GAMEPLAY…I would have paid $20 for it and would have been happy.

Assassin’s Creed 4 is terrible. Same jank-ass controls. “Look at me, I’m jumping randomly at a wall!” Same bullshit structure- hours and hours of silly collection quests, “tackle the courier” crap, and now you’re supposed to play the IOS app or something to make enough money to buy stuff. And of course, the classic “walk behind me while I deliver exposition for five minutes” way of telling a story. The pirate stuff looked cool, the character looked cool…but it really is more of the same that’s been in the game from day one. Year in, year out.

Good grief, who puts guards on the roofs of buildings that 99.999% of human beings can not climb?  Assassin’s Creed has jumped the shark…after trying 30 times to line it up right.

Got the Ascension add-on, it’s pretty good. The new treasure mechanic is worthwhile. Not sure if it was worth $4, but I’m glad I got it and it’s led me to play the game more than I have in some time. I think I still like Star Realms more overall, but Ascension is still the best deckbuilder on IOS.

VVVVVV was 99 cents. I had played it a little on PC but didn’t get very far. Christ, what a headache. It’s pretty great though.

Of course I had to read the big new Grant Morrison book, The Multiversity. I have no idea what he is doing with this story other than completely lampooning the concept of comics publishers having several different “realities”/”timelines”/etc. Some of it is pretty brilliant and VERY meta, especially a jump over into…Marvel Comics. There’s a couple of fourth-wall breakers too, and I love the cliffhanger that pins the blame for what’s happened on the reader- “Reader, what have you done!?” Art is hideous, shiny muscle stuff. I think it’s on purpose. Don’t know if we’re headed for a Seven Soldiers-level grand slam, but it’s at least smart and entertaining so far.

I recorded all of the Simpsons marathon. All of it. I watched a couple of episodes from the “shitty years” since I haven’t really followed the show regularly since season 10 or so. Man, they went down the tubes. I was watching one that had at least six crude sex jokes that were more Family Guy than Simpsons. So disappointing. Nothing that a viewing of “Mr. Plow” or “Lisa the Vegetarian” couldn’t  cure though. Still the best TV comedy ever produced.

Clash box set again. The only band that matters.

At the Theme Parks

So yeah, we took a last-minute vacation last week to Orlando. We really kind of had no idea what we were going to do until Tuesday night. We wound up staying at this AWESOME hotel, Cabana Bay. It’s a new one at Universal, all done in an early 1960s style. It looks great, lots of fun. I hate pools, but my wife and kids LOVED them. Waterslides, lagoons, $10 frozen cocktails.

We went to Universal for two days, I had not been there since Islands of Adventure opened. Let me make it plain. Even though there’s some really good stuff there (Simpsons ride, Revenge of the Mummy, the surprisingly good Despicable Me ride), they need to bulldoze everything and just make both of their parks Harry Potter. Because the Wizarding World of Harry Potter areas are THE BEST theme park features OF ALL TIME. It is freaking awesome. We did the Islands of Adventure part first (Hogsmeade) and it was great. The main ride, Harry Potter and the Forbidden Journey is just amazing, the best ride I’ve ever been on (sorry Haunted Mansion). It’s breathtaking, and the queue is amazing- you go up the steps in Hogwarts with all of the pictures and all. Ollivander’s Wand Shop, butterbeer vendors, Honeyduke’s for a Chocolate Frog…all of it is so well done. And then we got on the Hogwarts Express and rode over to the other park, where they have Diagon Alley.

The train ride is great, the cabins look just like in the films. It’s also a different show each way with different effects. Pretty cool seeing the dementor attack from inside a cabin, all in sillhoutte.

Diagon Alley was EVEN BETTER, not just because they have draft beer. It was even MORE detailed, bigger and immersive. Gringott’s bank is there, and there’s a HUGE dragon that breathes fire on top of it. Just amazing. That ride, Escape from Gringott’s, isn’t quite as good as Forbidden Journey but it was still pretty freaking awesome. The bank is lined with animatronic goblins doing work, and then you go down into the vaults. Biggest chandelier I’ve ever seen.

Michael Bay Transformers ride was HORRIBLE but the kids loved it. Spider-Man is WAY dated (Lady Venom, references to the Clone Saga…PLEASE UPDATE). The Dr. Seuss area is wonderful, especially the carousel. Jurassic Park ride is great but River completely flipped out on it. The E.T. ride is wonderful, a real classic. Very cute.

The Universal CityWalk area needs to be carpet bombed. It was like having a giant LED screen at full brightness right in your face with the words HAVE FUN on it and bland rock music blasting in your ears while someone feeds you French fries. It’s the kind of place where white people think they that like reggae all of a sudden.

Overall, Universal is fine if you have BOYS that are at least River’s age/height (44”/4+). But it’s really  kind of shitty for little girls, everything there is really boyish. And Scarlett couldn’t ride half of the rides. So…that meant day three was Magic Kingdom.

It was way crowded and their new Fastpass system BLOWS. Only three reservations. We used one on the new Snow White ride, which was lots of fun, and the other two on princess meet & greets. Ilsa and Anna were completely booked up, of course, but we got in for Ariel, Cinderella and Rapunzel. Scarlett just about lost her mind. She also got to meet Daisy, Minnie, and Jessie. River is terrified of costumed characters, and even ran away (literally, he ran away) from Captain America.

I love Disney, so I love Magic Kingdom but after going there two years in a row, I think I’m OK with not going back for a few  years. At least we got to ride Space Mountain this time, which is still amazing. I could ride that thing all day long, when those 2001 light tunnels spark up I get excited.

The biggest surprise was the Belle thing they have, it’s a really neat interactive show where the kids get to act out the Beauty and the Beast story. You start out in Maurice’s workshop and then walk through this magic mirror to the Beast’s castle. There’s a prep room where Madame Wardrobe (a giant animatronic with CG effects) and her assistant hand out costumes. Then you go into the next room and Lumiere walks the kids through the “play”. Then Belle comes out, which was really fun for the kids. She meets everyone. It seems like the kind of thing they ought to charge extra for or something.

But yeah, special note- if you like good food, be aware that Magic Kingdom is an utter hellhole of cuisine. There is NOTHING good to eat in that park, other than Starbucks.

The fireworks there are still completely over the top.