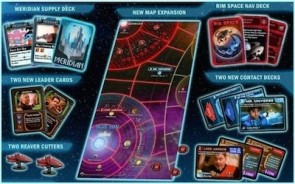 Blue Sun is another great Firefly expansion, here's the review. I love the new Reaver rules (and more Reavers on the board), the new scenarios are good, Mr. Universe is great, and I like that overall the game is even more dangerous than it was with Pirates and Bounty Hunters. It’s a stacked and packed add-on that is pretty much a must-buy if you like Firefly.

However, the game is starting to head down a path that I’m not crazy about. Right now, it’s fine. But we’re getting further away from the simplicity and ease of play that the base game offered and more toward the Arkham Horror style “explosion in a card factory” thing. Another big expansion is going to push the game toward bloat. It’s also already about at the upper limit in terms of length. That said, it’s emerged as a really fun system with lots of detail and I like the new addition to the family.

Still liking Heroes Wanted- the game’s got heart. There’s a real sense of “aw, shucks” charm to it that I  like. It may have all of those undesirable Kickstarter qualities, but it’s definitely on the “better” end of that spectrum.

Still digging Abyss too…the atmosphere is so cool, it’s easy to forgive it for really being a colored, numbered card game. I’ve seen some bitching about the pearls…how lame are people? The pearls RULE! You get these little seashell cups to put them in. If you drop them and they roll off for your dog or child to eat, then that’s on you. Definitely the right product design choice because It’s another little detail that makes the game atmospheric. If this game were released in 1998, it would have ERP written all over it. But it wouldn’t have had a cool fish people setting back then.

Hyperborea is here, one three player game in and I think it’s really good.  However, I think this going to get much the same reception that Eclipse did. Meaning that the Ameritrasher crybabies are going to whine about the cube-drawing thing, the lack of bullshit fluff text (“theme”), and the VP scheme. Expect to hear a lot of hemming and hawing about how Runewars is the “better” game”.

Asmodee is also sending me Lords of Xidit and Sun Tsu, a remake of Dynasties. Good stuff on the way.

Shadow of Mordor does so much right, so much that’s innovative and interesting, that it’s easy to forget how routine the game is. The Nemesis system is a HUGE innovation that is going to be ripped off ad infinitium this generation. The concept that ANY Orc can kill you and rise in rank to pester you again at a later time is brilliant. But then they can get into squabbles with other ranking orcs and kill each other. Or you can fight an orc and he’ll get away from you, vowing revenge. Then you set targets (maybe for payback- they’re marked for that) and go out to disrupt their ambitions. The whole thing is almost like setting up a hit list to go after an organized crime syndicate.

But it is still very much an open world, Assassin’s Creed style game. Lots of sidequests, collections, and other filler content. The story is terrible- “Sauron and his goons kill your family, you get possessed by an elf ghost and wander around Mordor freeing slaves and chopping up orcs”. OK.

On the flipside, it is really fun and it feels different enough from other open world games…it’s definitely on par with Arkham City quality-wise, apart from the bad writing. As far as the Tolkien in it goes, he’s probably rolling in his grave. I don’t think that anything in the game is what he had in mind, especially not the gruesome, graphic violence. But it does use the Jacksonian interpretation to its advantage, so visually it looks spectacular and it does offer a new take on Mordor and the orc “culture”.

Also playing Smash. It’s Smash alright, even if it’s on a small screen. Great fun, as always. Tons of things to do and see. Can’t wait to see the Wii U version, but I’m liking it as a handheld game plenty fine. I have to say, watching the Villager from Animal Crossing just CLEAN HOUSE is quite delightful. As is adding Pac-Man to the roster, what an inspired choice. I especially like the endurance mode where you fight every character in chronological order. Hard to really peg down who my “mains” are, but I tend to go by how much I like the character over their actual quality. So right now, I’m mostly running Little Mac, Captain Falcon, SFox, Falco, Samus and Pit. I have not yet unliked Duck Hunt Dog, but I can’t see him not becoming a favorite. But man, Villager…total bad ass, I mean it.

I also got in a rental of Hyrule Warriors. I was pretty skeptical since I haven’t really been impressed by the whole Dynasty Warriors/musou thing, but holy crap is this game fun. Total hack and slash mayhem, but with Zelda fan service by the bucketful. Lots of upgrades,crafting, and several play modes make this a surprisingly complete package. The only negative really is that it’s coming out around the same time as Bayonetta 2 (and Shadow of Mordor) so it comes across as a B-lister in the third-person action/adventure sweepstakes. Which is a shame, because this is a solid, fun to play game. Looks like it may be a “pay to keep” one.

Got bored at the playground the other day while the kids were running around and was looking through that “not on this iPhone” thing in the App Store. I guess some time ago, I bought Legion of the Damned but I never played it. So I loaded it up. What a surprise, I think it may be one of the best turn-based wargames on IOS. It’s like a more advanced Uniwar, with three unique factions, special unit abilities, and a mostly capture-the-flag based style of play. It’s really fun, really easy to get into, and it’s got a perfect setup for mobile. Eight turn limit in each scenario, with limited (and very expendable) units. There’s some 2012 wonk to it, but it holds up pretty well. Production values are high (voice-acted cut scenes?) and there’s actually a random map generator, which is kind of rare for IOS games. It also kind of reminds me of Ars Victor in more than a couple of ways. Great boardgame-style TBS. I guess it’s based on some books or something, whatever.

Star Wars Rebels completely delivers the goods. Loved it. It’s too early to tell where it’s going, but with Dave Filoni (Clone Wars) and Greg Weisman (Gargoyles and like every other good superhero cartoon ever made) on board I have high hopes for it. The premiere did an excellent job of setting up where this show sits in the SW universe- between Clone Wars and A New Hope. The rebellion is just getting started, the Empire is in full Third Reich mode, and a lot of the classic hooks from the original films are in place. Some of it is really overt- a lot of it looks straight out of ANH. Some of it is subtle, like how the space scenes are actually intentionally made to look like the dated effects. But it is a new show, and it has new design work as well, some of it referencing Clone Wars and some of it going in an all-new direction.

But yeah, classic Stormtroopers, classic TIEs. It makes a difference.

The story was good, starting off something like Aladdin (!) but winding up with a lot of potential storylines to explore. The characters aren’t fully fleshed out, but I got a definite sense of who Kanan, Sabine, Hera, Zeb, Chopper and Ezra are and where they’re going. Kanan’s big reveal was pretty bad ass, and I really like the direction that could be heading.

The Flash was OK. It looked like every other CW show, with models cast instead of actors. The Gorilla Grodd reference was fun, and it was interesting that they threw Weather Wizard out there.  Seems like they’ve sort of already introduced Professor Zoom. Noticed that Geoff Johns co-wrote it. I dunno, it might be good if they keep a lighter tone. No mention of the Speed Force or any of the really fun pseudo-mystico-science surrounding that. Not yet at least.

Back in 1989, I bought an overpriced import cassette (!) of a new record- Godflesh, “Streetcleaner”. I had read about them in a magazine and being all up into metal at the time I wanted to see what the fuss was about. I was really into Anthrax, Slayer, Nuclear Assault and some of the early grindcore stuff at the time. But that first song came on…”BREED! LIKE RATS!” and it was like someone hit me in the face with a sledgehammer.

Now Justin Broadrick and GC Green are back with a new record “A World Lit Only By Fire” and I had a feeling that this was going to be the real deal, not a post-reformation comeback thing.  First song- “A New Dark Age”- same sledgehammer feeling as “Like Rats”.  The song is punishingly heavy, leaving no doubt that Godflesh is back. This is a really, really, really good album so far, and I think it will likely be regarded by most to be their best since “Pure”. They sound more relevant than ever, and once again they’ve completely wiped the floor with the whole “industrial metal” field’s shuddering remains.

Still to this day, I want that “Avalanche on Pause” shirt.