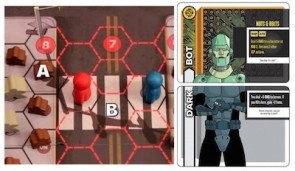 Or, The Leather Beard versus The Rubber Hobo

This Heroes Wanted review is way too long, by about 500, 600 words. But it’s also one of those reviews that was actually quite difficult to write. Because I like the game, but I have to admit that it is kind of a mess. That makes it something of a rarity, because at this stage in my gaming life I have little tolerance for “almost” good games. There are some things about Heroes Wanted that I think will cause a lot of people to check right out of it. But there’s a such a great spirit about the game, a kind of charming enthusiasm despite its shortcomings, that I find that I really enjoy playing it even when the tension is practically non-existent, the co-op/competitive thing is at odds with the scoring goals and there are turns where it feels like you can either do absolutely nothing or only one thing that isn’t really worth doing.

It’s tough to write about these kinds of games…much easier to write about things that are squarely good or squarely bad. I’m hardly indifferent or uncommitted about it, but I think it requires a more complicated opinion. I know people that would absolutely love this game, and people that would absolutely hate it. But I’m somewhere on the high side of the equation, occasionally dipping lower when something bugs me about it.

I hate the quirk cards. I hate any mechanic where you have a card that says “talk in a funny voice” or something like that. Do not presume to tell me how to have fun!

If you haven’t noticed, Asmodee is just KILLING it lately. Three games into Hyperborea, I think it’s excellent. Lords of Xidit, one game but I liked it quite a lot and I’m really looking forward to it Sunday. Sun Tzu is a reprint of Dynasties, a little two player game from 2004 that suddenly feels current and in line with Matagot’s hybrids today. Then there’s Abyss, which is a great New Euro. Funny thing is that aside from Abyss, I wasn’t sure I even wanted to review those other titles but they were offered by Asmodee’s press contact. And now they’re among the best games I’ve played in the last half of 2014.

Mystery package from Z-Man arrives today…no idea what it is. Kemble’s Cascade? Camel Up? Clash of Cultures or Crusoe expansion? No idea!

I’m starting to feel really bad for the bad guys in Diablo III. It’s just embarrassing how I’m just cutting through them like so much soft butter. They do more damage hitting me than I do to them. I’m getting like 50k+damage on criticals now. For a while I was using this Bovine Bardiche, which summoned cows to fight with me. But I felt like that was just humiliating all the demons and so forth so I switched to this massive legendary sword that just kills most things in one swing. It’s just too, too easy. Double XP this week too, and double treasure goblins.

Smash rolls on…I just unlocked R.O.B., may be my favorite character. So much to do and see. Right now I’m trying to master that thing where you hit the punching bag and make it go as far as possible. Ness us the champ on that one right now. Really digging Pac-Man too, some fun moves.

Shadow of Mordor, I’m on the second map now. Starting to get bored after some 18 hours.  It’s gotten quite repetitive but I enjoyed hunting with a dwarf for a couple of missions..

I didn’t think too much of Dream Quest back when it came out. I thought it was painfully unfinished, unpolished and inadequately developed. I mostly stand by those assumptions, but the game did get its hooks into me last week. I thought I’d try it again after a big patch and there were some definite improvements. There’s a really, really good game here but it still doesn’t quite seem to be all the way there yet. I really like the upgrade decisions- always a tough choice- and once you get into the more intricate battles, the cardplay gets quite interesting. I like how the unlocks work and I like that the game encourages you to keep trying. Glad I looked back into it, but I still wish that the developer would put a little more effort into how the game looks, it’s atrocious. Don’t make excuses for an amateur-looking, crudely illustrated product.

It really doesn’t get any better than Dog Day Afternoon. What a great film, I still think that was probably Pacino’s career-best performance

Second episode of Rebels, still looking good. LOVED the references to Star Tours, totally unexpected. I think it was a little early to bring R2 and Threepio into it, but it was a lot of fun. Loved R2 and Chopper bickering. I left the room while it was on but I could hear the TV and I noticed “man, that really sounds like Star Wars”. I wish they would do the Netflix thing and just release the entire season at once, I’d watch them all in one sitting.

Also caught Peeping Tom on TCM- that film was so far ahead of its time, and for my money it was the top thriller of 1960. Yep, better than Psycho. The opening was so transgressive for its time, putting the audience in the first person perspective of a killer. Such a kinky, twisted film that never goes overboard.

Darkspace is an unusual Swiss black metal band, and not just because they have a female bass player and they all dress like Steve Jobs. Yep, black mock turtlenecks.The really unusual thing is that their schtick isn’t hell, the forest, or anything like that. It’s SPACE. This band is all about the evil of SPACE.  So it’s spacey, atmospheric BM. They just put a new record “Darkspace III I” and it’s really damn good.

Got a hankering to pull out the old Generation X records so I’ve been listening to those as well. They were such a fun band, I really like Tony James’ stuff in general and of course the young Billy Idol makes his mark on their standout tracks- “100 Punks”, “Ready Steady Go”, “King Rocker”, “Day by Day”… “Kiss Me Deadly” should have been huge, but anybody could have heard “Dancing With Myself” in 1981 and would have known right away that it was a smash hit in the making.

Saw that Jawbreaker’s much-loved 1993 LP “24 Hour Revenge Therapy” was re-released, thought I’d listen. Definitely not for me. That’s a particular style and era of punk that just completely passed me by. When that album came out, I was too busy digging in the crates for Discharge and Broken Bones records to notice.