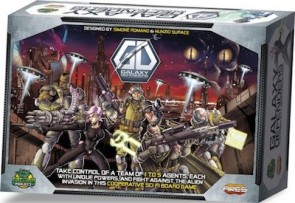 So Galaxy Defenders is pretty good- sometimes it’s even really good. But it’s one of those games that’s becoming more common. One of those where you have to decide if you want to invest in it when you’ve likely got three or four other games like it (or directly antecedent to it) on your shelf. “Standing on the shoulders of giants” is definitely a phrase you can use with this one.

But there again, it’s very nicely produced and has a lot of fun on offer…and I’d actually like to see the next D&D Adventure System Game learn a few lessons from its appropriation of that AI system.

Review has been a long time coming- I requested it all the way back in April. It showed up in October.

Surprise package in the mail today- Sheriff of Nottingham. Looks fun, and I play with a bunch of liars so it should go over well. Ton of promos came with it.

Got a round of Cyclades in last week with the gang…haven’t had it out in a while. Always great. It’s definitely held up over the past couple of years.

But mostly playing Heroscape.  Kids love it, we just need to get Scarlett to be OK with not just using the girls. Lots of battles, almost every day. Last night it was a team of all Vikings going up against Nilfheim, an Ice Elemental and (at River’s request) two squads of Venoc Vipers that replaced the more thematic troll. I had a river set up with a couple of bridges, snow tiles scattered around. Vikings just got decimated before they could even cross the river. Gorillas vs. robots was a good one, too.

So I was going to get the kids Disney Infinity for Christmas, but I got a starter set off ebay for a good price and tried and pretty much just flipped it right back on there. It was really quite disappointing on some levels, but I also felt like the Toybox mode (which is an evolution of the great one in the Toy Story 3 PS3/360 game) was probably beyond them for the next couple of years. It’s very Minecrafty, in a way. And I do not like how the game is set up, where you can’t just play any character in any setting. If you want to co-op in Monsters University, you have to have MU characters for both players. So much for bringing Anna and Ilsa into the campaign games. They’re relegated to the toybox.

So I started rounding up Skylanders instead once I sniffed around and saw how utterly cheap that stuff is on eBay if you buy in lots, buy loose, and buy last year’s model. Trap Team stuff is still expensive since it just came out- starters are $50-$75. But a Giants or Swap Force starter is only about $20. Through a few shrewd bids and a couple of buy-it-nows of loose figures, I’ve got them a collection of about 25 figures, a collector’s case, and both the Giants and Swap Force games along with the portals for both. Several of those figures I got for literally a dollar a piece. The giants and swappers were more expensive, the most I paid was $10 for a girly ninja.

So I have all of this stuff, and of course I had to play it to see what it was all about. I’ve just dinked around a bit with Giants, but it’s really fun and I think it’s going to be a great co-op one for them. It’s a simple dungeoncrawl, really, with some very family-friendly fighting, all-ages storylines and fun characters. I wasn’t really clear as to how it works, but basically each figure levels up independently and has a skill tree (well, mostly binary choices) and can equip some “loot” like hats to boost some stats. It almost feels like a modernized version of an old PSX mascot platformer. Like, say, Spyro…

Where “they get ya” is that some of the areas are only accessible by certain characters. They are all aligned with an element, so you might come to a gate that needs a water character or a giant. If you don’t have that figure, you can’t do that stuff.  But if you do, you just swap out the figures. We have a big set, so we have at least three of each element (I planned it that way), it’s not even a problem. But you could totally play the game without a bunch of figures, or with only one of each element if you want to do and see everything.

So yeah, I like it, looking forward to Christmas morning.  But the punchline to my thinking that I could get old stuff is that when I mentioned to River that he should ask Santa for some Skylanders, he said “Yeah, I want to get some Trap Team characters!”

While in the throes of Riddickmania, I’ve also been messing around with the ancient Chronicles of Riddick: Escape from Butcher Bay/Assault on Dark Athena compilation that came out on PS3 like five years ago.  I’m not through the first game yet, but it’s been pretty good so far. They sure don’t make ‘em like this anymore. Very old fashioned. But it’s a good, story-driven FPS game with a pretty cool setting and concept (jailbreak). The second game is supposedly not as good, we’l l see.

Bastion, of all things.

Got my Riddick Blu-Ray set so I watched Pitch Black. It’s way better than I remember it, having only seen it one time in the theater. In the middle of a nasty break-up. Or it may be that at the time I was all hardcore into making films and doing things a certain way that I just wasn’t tolerant of the style. It’s a weirdly small film, unusually character driven for the kind of movie it is. Definitely nothing like the baroque overload of the second one.

Now I’m going to shave my head and walk around wearing goggle-like sunglasses and Under Armor all day long.

All 1960s stuff. Mostly the slightly spooky, sad or apocalyptic stuff. “Nights in White Satin”, “In-a-Gadda-Da-Vida”, “California Dreamin’”, “I Remember (Walking in the Sand)”, “The Time of the Season” most of The Doors…also the Yardbirds, whom I’ve never really heard much of beyond the obvious tracks. Great stuff. Also hitting up The Box Tops (Alex Chilton!), Spencer Davis Group, Tommy James and the Shondells

River got in the car today and said “I want to hear the Strawberry Alarm Clock”.

Discuss this article
Log in to comment
Posts in discussion: Barnestorming- Galaxy Defenders in Review, Skylanders, Pitch Black, the 1960s